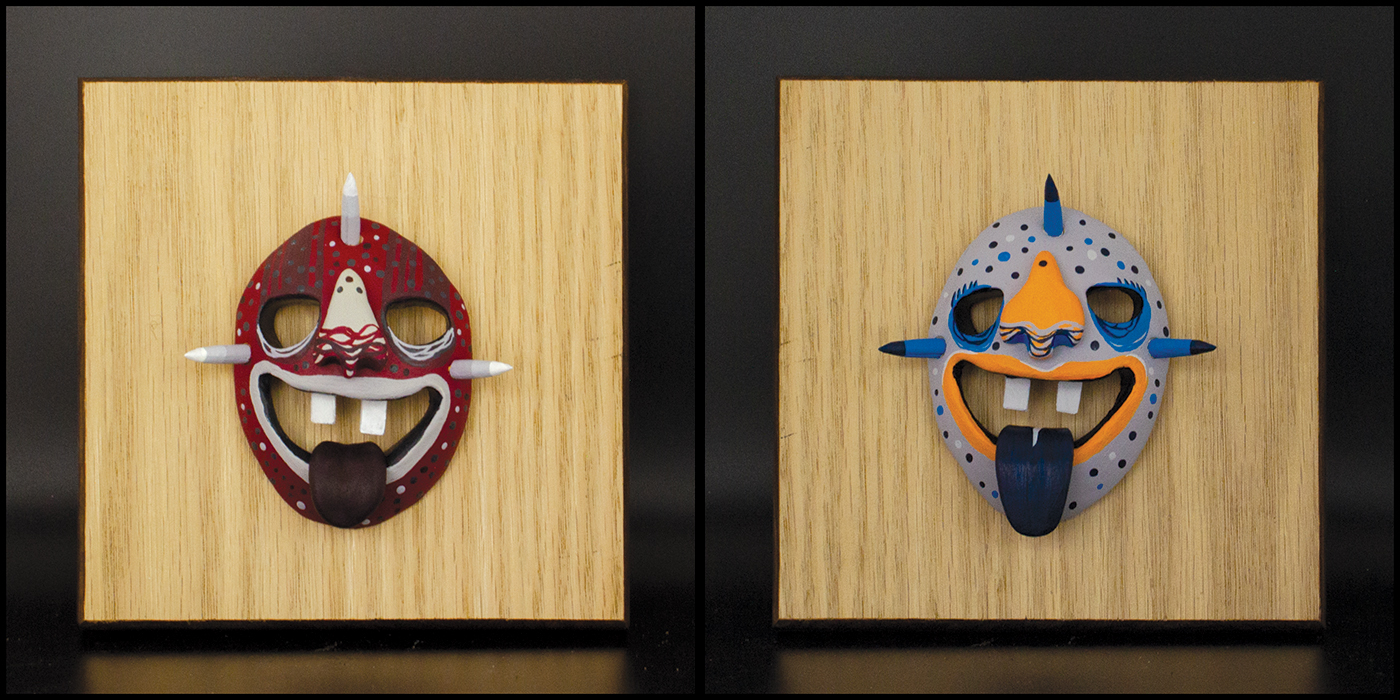 If you’ve seen them, you remember them: colorful masks with mouths agape, perhaps with teeth jagged and jutting out, horns and dowels painted and adorned. These intimidating, beautiful masks, called vejigante masks (or caretas, Spanish for masks), are a staple of Puerto Rican Carnival culture and folklore. The masks stick in your mind. Your memory might be most clear of a disturbing scowl with brambled horns, but a mask bearing a mirthy, tongued grin may have stuck harder. For local folk artist Alli Arocho, they’ve become a lifeline to her island home—its culture and ongoing strife—but also an expression of her love for Puerto Rico. Her first solo show, Aislá, will debut through Mestizo Institute of Culture and Arts (MICA) at Sugarspace with an opening reception March 5.

The vejigante folklore figure traces back to medieval Spain, but the form of the caretas vejigantes wear come from the way Puerto Ricans adapted Spanish culture, making the masks uniquely their own. In the loosest sense, vejigantes can represent the devil in the eternal fight over good and evil, but historically, they are attached to the Moors whom Saint James slayed during the Christian Reconquista of the Iberian Penninsula. It’s a sordid legend, one incorporated into Puerto Rican Carnival culture as a product of Spanish colonization. As Puerto Ricans honored Saint James in annual festivals, the masks became a sort of reconciliation: These grotesque, vibrant visages assimilate a tradition while also subverting that tradition through their aesthetic. In Puerto Rico, the vejigante is more than a demon.

“Arocho also views the showing and her work up to this point as a rite of passage.”

“I guess the combo of needing a break from tech and being perpetually homesick made me focus on folk art,” says Arocho, whose path to art-making is an off-ramp from a career in software engineering. At 23, she moved from Puerto Rico to North Carolina with her partner, who was pursuing their PhD. Arocho spent years in and out of college, but she eventually settled on studying computer science, receiving her bachelor’s in 2015. Still, computer science’s artistic applications were always on her mind. “I once gave a talk on how to make data-driven art using a programming language called Processing,” she says.

Arocho began working as a software engineer and moved to Utah in July 2017. The eventual decision to walk away from the tech industry was complicated. “I got burnt out,” she says. “I kind of miss it—the whole logical, problem-solving aspect of it. When I started doing art, I thought I would be doing something with software engineering, and I went the total opposite way—’Let’s do folk art masks made out of coconuts—zero technology involved’.” Tech burnout combined with homesickness led Arocho to rediscover her young fascination with vejigantes. “I devoured anything I could find out about them. I started visiting artisans back home and found a wonderful mentor, Wilcelino ‘Celele’ Pizarro from Loíza, Puerto Rico—the birthplace of the coconut vejigante mask.”

“It’s important to me that I honor the artisans that have kept the vejigante tradition alive for so long.”

In the summer of 2018, Puerto Rico was (and currently is) recovering from Hurricane Maria, which had struck in September of 2017. “I thought making [and] selling mini-vejigante masks for charity would be a good way to connect with home and also help with the recovery from afar.” The positive response prompted Arocho to find studio space and begin working full-time. It also reinforced her desire to do right by her heritage. “It’s important to me that I honor the artisans that have kept the vejigante tradition alive for so long, to understand the history and evolution of vejigantes and to accurately share my island’s history with others.” The title of the show, Aislá, is a phonetic spelling of the word aislada when pronounced with a Puerto Rican accent. It means to isolate metaphorically, to create an island. Puerto Rico’s status as an unincorporated U.S. territory makes this especially potent, as it is “owned” but denied the rights associated with statehood.

This solo show will feature work Arocho has been making since she became a full-time artist last January, but Arocho wants to use the opportunity to show off Puerto Rico as much as possible. The March 5 reception will feature Puerto Rican poetry, music, asopao de gandules (delicious soup!) and arroz con dulce (rice pudding!).

“I devoured anything I could find out about [vejigantes].”

Arocho also views the showing and her work up to this point as a rite of passage. “I intend to expand on how these traditions are preserved and push the boundaries of what vejigantes look like when created by an artist of the Puerto Rican diaspora—I must earn the privilege to do this,” she says. Her professional and personal experiences, combined with her relationship to Puerto Rico and its history, are broiled together in her art and its eventual goals. Though she’s not yet certain, Arocho is interested in exploring the use of AI to help preserve Puerto Rican folk art. “The effort would hope to increase people’s appreciation and awareness of folk art, craft and Puerto Rican traditions through the use of technology,” says Arocho.

What form this will take, she’s not yet sure, but there’s more on the horizon for Alli Arocho. Her exhibition will run from March 5 to April 16, but be sure to check out the opening reception for a fuller cultural display of Puerto Rico. More information is available on MICA’s Facebook page @MestizoArts.