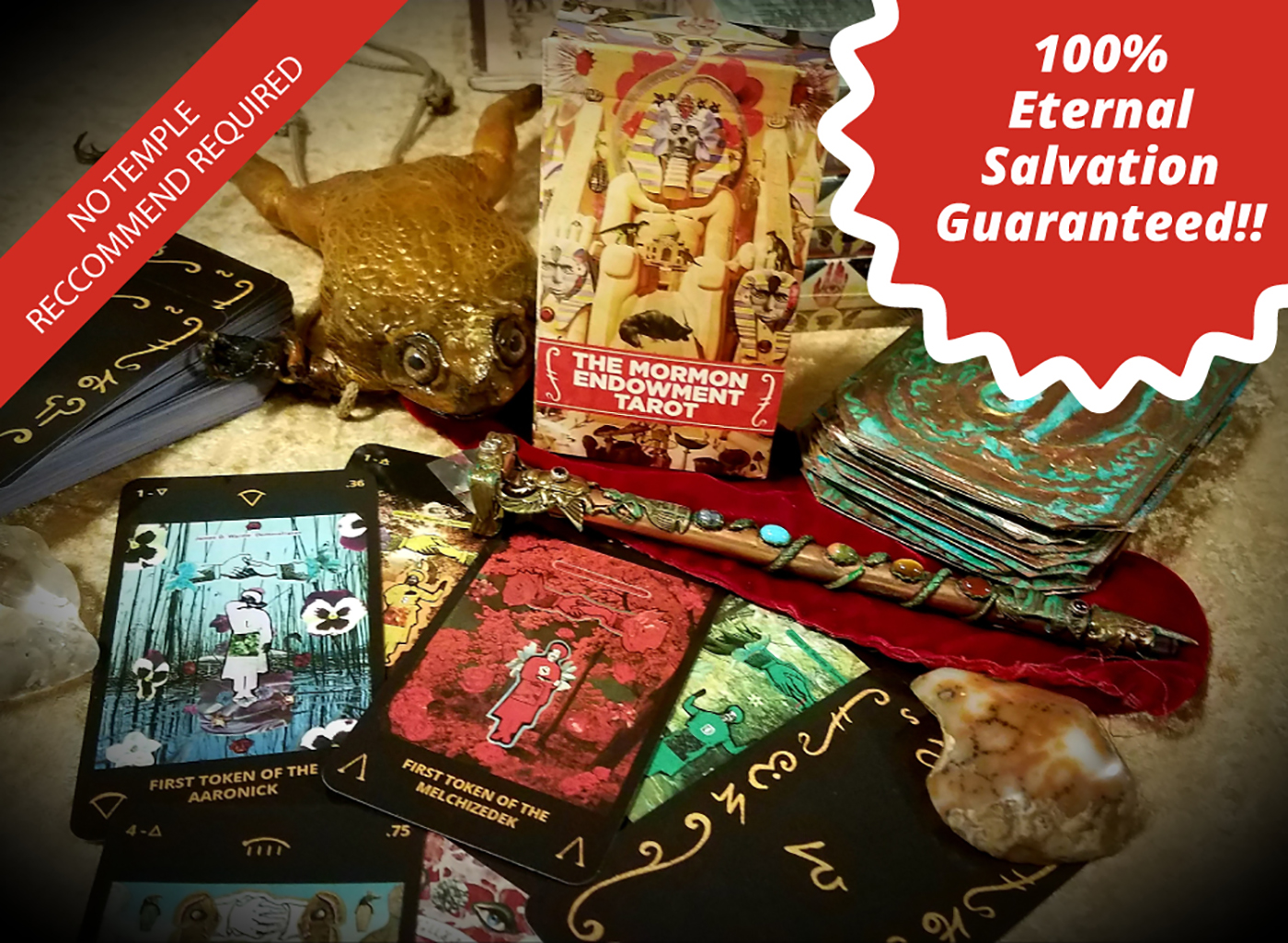 “My artwork has always been controversial,” says Gazelam Ale, artist and creator of The  Mormon Endowment Tarot Deck. Ale’s art focuses on a historical, folk-magic side of Mormonism, specifically the concept of Endowment. Endowment is considered a sacred and highly secret temple ceremony by The Church of Jesus Christ of Latter Day Saints, a ritual that simulates the creation story from Genesis and has similarities to Freemason rituals. In light of the LDS Church’s recent redactions in their official Endowment temple ceremony, Ale feels a personal mission to preserve the Endowment through their art.

Ale became interested in magic and tarot in their early 20s. This piqued their interest in folk magic traditions, such as scrying and magic circles, which were part of early Mormon practices. “When I started to learn more about the historical aspects of Mormonism, I found that link and it was this big eureka moment. This has been part [of my family history] and I was already interested in it,” says Ale, who is related to Sally Chase, a seer and scryer who directly influenced Joseph Smith.

Ale’s tarot deck, which consists of 78 hand-crafted collages, can be used much like a normal tarot deck. However, Ale’s deck has a unique numbering system, following the narrative of the Endowment ceremony. “The Temple,” depicting the Salt Lake LDS Temple, would be the 6 of Pentacles in a traditional deck, but marks the first card of Ale’s deck. “The first card is ‘The Temple’ because that’s when the doors open and you go inside,” says Ale. Ale’s deck also incorporates unique symbols such as Reformed Egyptian, said to be the symbols Joseph Smith interpreted into The Book of Mormon.

“When I started to learn more about the historical aspects of Mormonism, I found that link and it was this big eureka moment.”

Another unique feature of Ale’s deck is two versions of “The Tower ” card. In a traditional tarot deck, “The Tower” depicts a tower being struck by lightning, usually interpreted as a sign of catastrophe. The first collage that Ale created for the Mormon Endowment Tarot was “A Great and Spacious Building,” showing the LDS Conference Building being struck by lightning. Ale’s second “Tower” card, “Sorrow/The Curse,” follows the narrative of the Endowment. Ale suggests that deck users can switch these cards out based on what they feel more connected to. “Or they could have two tower cards because things are so crazy these days,” says Ale.

In addition to the subject matter of Endowment, the nudity present throughout Ale’s art is also controversial. Ale first premiered collages that would later become their tarot deck over a decade ago at a gallery opening with their band, Godstar Experience. Some of the works were vandalized that night. More recently, Ale was barred from giving a presentation on tarot at Sunstone (“Kind of like Mormon Comic Con,” says Ale. Sunstone is a symposium for those interested in Mormon history) due to depictions of nudity. “Nudity has been such a big part of art from the beginning of time. I felt like it was important for the subject matter of Adam and Eve … their naivety and innocence,” says Ale, who was disappointed in being cancelled from Sunstone last minute. “It really comes down to individuals who want to pervert and sexualize something that should just be beautiful.”

As an artist, Ale finds the deck is a source of magical inspiration and a tool to catalyze creativity. The images used for each collage were painstakingly selected, cut and added. For the future, Ale plans to create a deck of the 22 Major Arcana—or Triumph—cards based on their paintings, as well as a “Grimoire” based on Mormon iconography and symbols. The Mormon Endowment Tarot is currently in its first edition as a limited run of 50. Ale’s deck and other artwork can be found at etsy.com/shop/orderofawman.