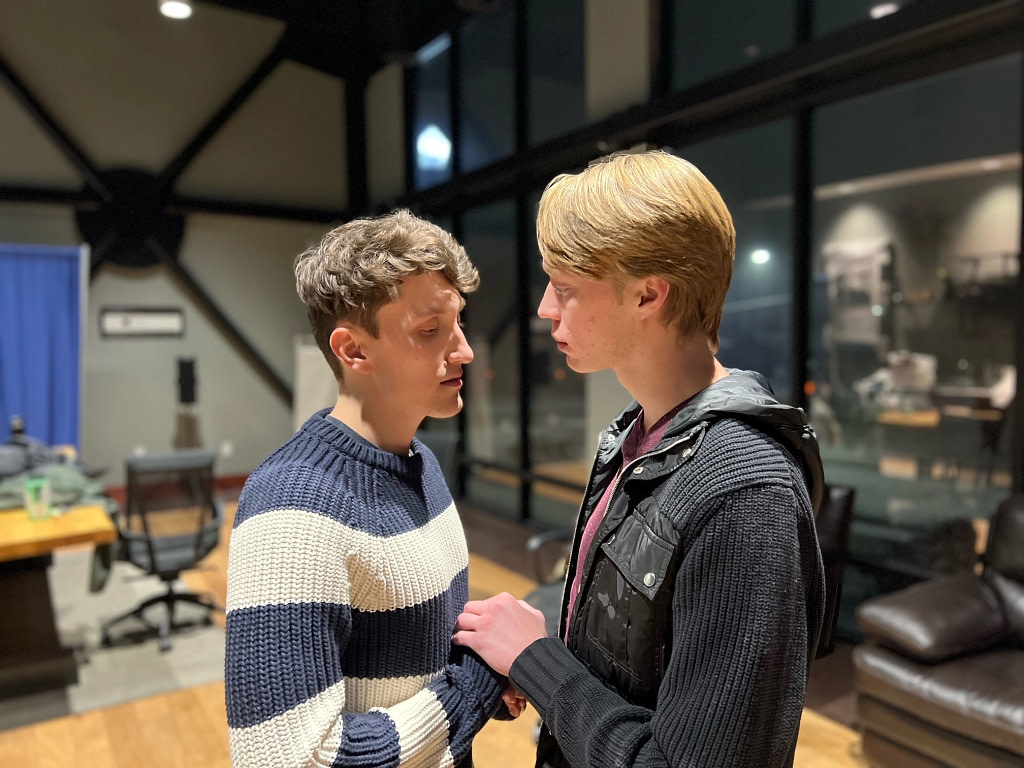 Gross Indecency Reveals the Trauma and Trials of Oscar Wilde

Gross Indecency: The Three Trials of Oscar Wilde by Moises Kaufman took the stage at the new Mid-Valley Performing Arts Center to an enthusiastic crowd of theater-goers over the course of its two-week run in Studio 5400.

Gross Indecency follows Oscar Wilde through three court trials. In 1895 the Marquess of Queensberry declared Wilde a “posing sodomite,” and Wilde took the Marquess to court for criminal libel. Two more trials would follow, in which the court would dissect Wilde’s literature and examine his private relationships. The third and final trial would find Wilde guilty of “gross indecency,” and he was sentenced to two years of hard labor forever staining his literary reputation.

The overall design for the show was quite simple—the set consisted of seven folding chairs and one desk, all surrounded by miscellaneous papers that were used as props pulled from the ground, taking the place of court documents, poems and love letters throughout the show. The lighting, designed by Zander Levy, mimicked a courtroom with one, singular amber wash that did not change throughout the show. Costumes were a strict, black-and-white color scheme, each unique to the character who donned it. The overall design contrasted the complex language of the show well: With fewer distractions came more focus on the intricacies of Wilde’s life and poetry.

The cast did a fantastic job navigating the story. Though the accent work could have been a bit stronger, Luke Harger’s embodiment of Oscar Wilde more than made up for any issues. His take on Wilde was endearing from the moment he spoke. Prosecuted by Sterling Shane Allen, who packed the same punch, I felt the kind of tension that is particular to courtrooms, which Wilde’s trials must have also held. Every scene between the prosecutor and Wilde felt like an invitation into a tense and intimate affair. The rest of the cast was just as exuberant. Highlights include JackW Cobabe as Alfred Douglas, Oscar Wilde’s young lover, and Ryan Kinville as Douglas’s homophobic father.

For a show taking place in 1895, Gross Indecency felt modern with its themes of homophobia and forbidden love at the forefront. Wasatch Theatre Company delivers a heartbreaking and terrifying look at the persecution of a man who reflects aspects the LGBTQIA+ community today. While the show took its final bow on Saturday, Jan. 14, Salt Lake City would do well to keep an eye on what Wasatch Theatre Company does next. –Payton Rhyan Wright