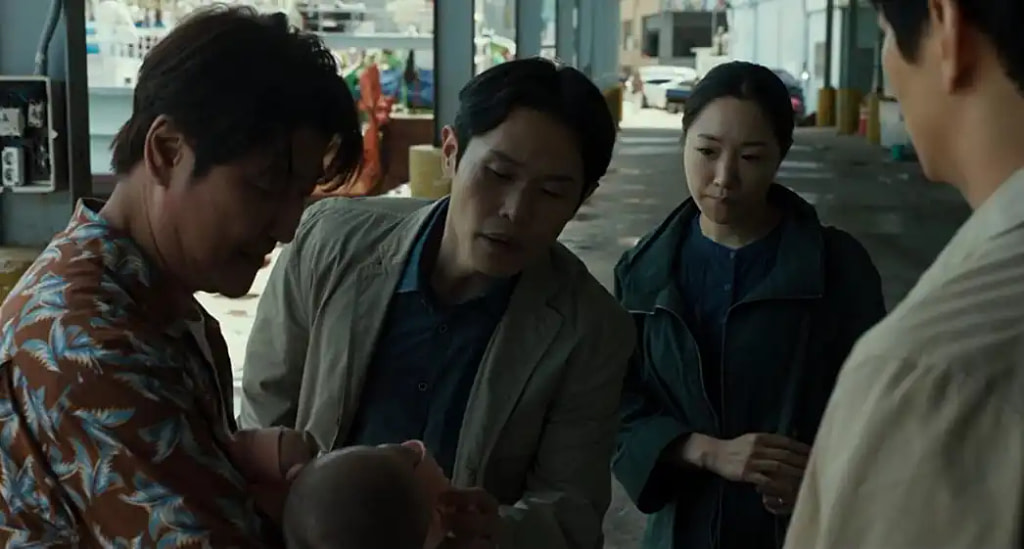 Amid a slew of lackluster January releases, the Korean-language film Broker, from acclaimed Japanese Writer-director Hirokazu Kore-eda, is a surprise delivery that couldn’t be coming at a better time.

Broker stars Song Kang-ho (Parasite) as Ha Sang-hyeon, a small businessman with two decidedly different enterprises. While he owns and operates a laundry business, the real money is in his side hustle: stealing babies from the “baby box” window at a nearby church where people can anonymously leave infants that they can’t or don’t wish to keep.

Song’s partner, Dong-soo (Gang Dong-won, Peninsula), works at the church, and the pair claim a nice finder’s fee in placing babies with couples who cannot have children and want to skirt the complex adoption process. When a young mother, Moon So-young (Lee Ji-eun, Persona), returns to the church with second thoughts, she discovers the scheme and decides to join the brokers in selling her baby with the reasoning that she can ensure that the child is placed in a good home while receiving a percentage cut for her labors.

Despite dealing with serious, morally murky and upsetting subjects, Broker presents it all with sweetness and irresistible charm. It’s a thoughtful and unapologetically sentimental variation on the formulaic road trip movie, complete with mismatched characters who learn and grow along the way. Kore-eda (Like Father, Like Son, Shoplifters) keeps things moving at a crisp pace without ever shortchanging the characters or the complexity of the difficult life choices that they are making, never letting the audience linger in their judgments of these characters. If there’s a weakness to Broker, it’s that it wraps up a bit too neatly, though it plays well enough to easily forgive this flaw and is bittersweet enough to make the ending not feel like a cheat.

Song is terrific, bringing depth to the irresponsible, lovable-loser character, and Gang is irresistible as the young sidekick who just might be the wiser man. Lee emerges as the standout, in large part because the enigmatic Moon manages to somehow be the least likable and arguably most sympathetic character. Lee’s dynamic performance infuses her with such humanity that every moment she is on screen is fascinating and often surprising. The rest of the ensemble is quite capable, particularly Bae Doona (Cloud Atlas) as Soo-jin, a police detective following the trio. The interplay between Bae and Moon provides some of the strongest moments of the film with a character dynamic that constantly leaves us trying to figure out whose side we are on.

Broker is a daring film that subverts expectations and provides an involving storyline that will keep you hooked until the very end. It’s a loving, intelligent and haunting mixture of darkness, regret, love, hate, compassion and hope, and it should be high on your list of moviegoing options for the weekend. –Patrick Gibbs