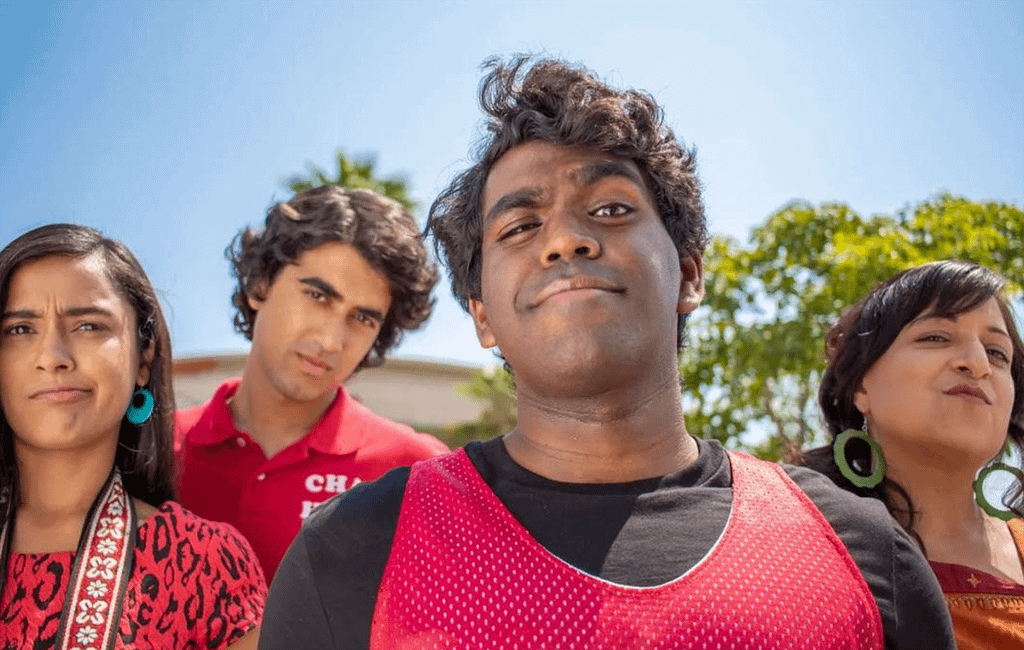 There are a lot of ways for a line of dialogue to sound off. IFC’s new comedy release Four Samosas features a lot of dialogue that communicates things to the audience, but has little-to-no function for the characters. It raised a flag for me in the film’s opening scene, as Vinny (Venk Potula), a salesman at a sari shop, rants to his silent co-worker, reciting for her the emotional details of his relationship with his ex-girlfriend. “I know it was three years ago!” he shouts as an answer to a condescending glance. Vinny knows this story. His co-worker, too, already knows this story. So why is Vinny saying all of this? For the audience. And the audience… is me. And for me, it sounds off.

The writing is the unfortunate weak point of Four Samosas, with a script by writer-director Ravi Kapoor (Miss India America). When Vinny and a group of friends decide to rob a local grocery store’s cash safe (for reasons vaguely justified by a sense of personal injustice), it feels like they do it not because it’s something these people would actually decide to do, but because that’s what this movie is about and they’ve gotta get around to it some way or another.

In other spots, the characters adopt a tone and rhythm reminiscent of Diablo Cody’s Juno script, peppered with overwrought clever-isms (“the GOAT of goat shit”) and winking substitutions for stronger profanity (“mother-copulating), though with little of Juno’s verve or specificity of character. It’s a messy script, at times both over-written and under-considered, and it could have done with a revision or two to balance out those tendencies.

This is frustrating, because Four Samosas does a lot of nice things aesthetically. The film looks lovely, with colorfully dressed characters against the backdrop of a lived-in, Southern Californian Little India. Sagar Desai’s musical score is also good, using South Asian instrumentation to pleasant, propulsive effect. The performances by the film’s young leads are uniformly fun and energetic. Karan Soni (Deadpool, Detective Pikachu) pops up throughout the movie, giving the most effective attempt at translating the script’s uneven, “off” comedic sensibilities into on-screen comedy that lands.

Ultimately, the film’s pieces add up to something that feels like a little less than a whole meal. The team behind Four Samosas clearly put a lot of thought and finesse into its presentation—if only they had a more polished script to present. –Daniel Kirkham