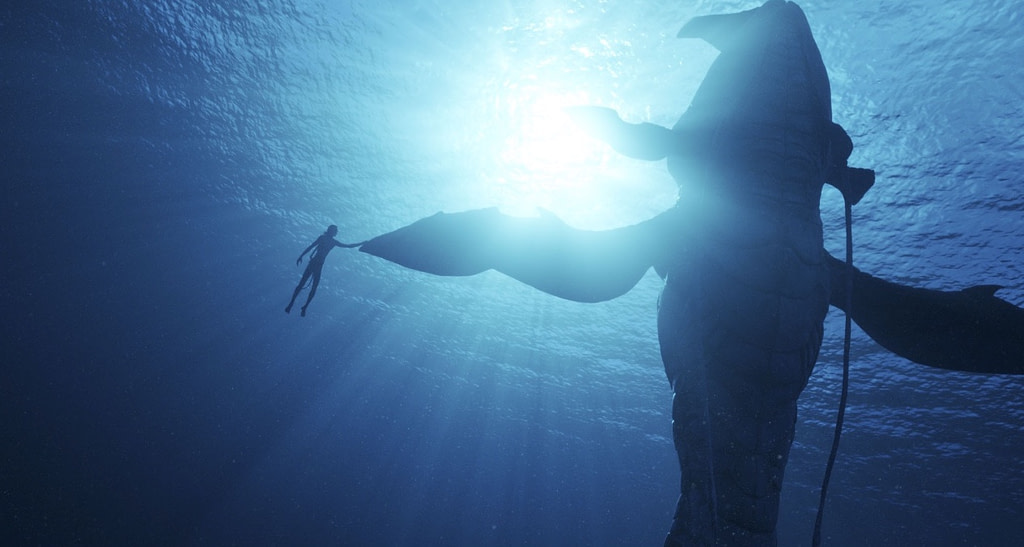 As is often the case with popular fads, James Cameron’s Avatar went out of style, and it’s not considered cool to be a fan of it. No one has ever accused me of being cool, however, and as someone who has a big sentimental soft spot for the first film, I entered Avatar: The Way of Water eager to be transported to the beautiful world of Pandora once again.

The second entry in what is now meant to be an epic, five-movie saga, Avatar: The Way of Water picks up more than 10 years after the events of the previous film. Jake Sully (Sam Worthington), the Marine who led the Omaticaya people to victory over the invaders from Earth all those years ago, is now not only a full-fledged Na’vi, living in his blue body full time,  and leading of the clan. Jake is a father now—insert “Feliz Na’vi Dad” joke here—and lives in peace with the love of life, Neytiri (Zoë Saldaña), and their children.

Along with their biological offspring, Jake and Neytiri have adopted two outcasts: a Na’vi girl, Kit (Sigourney Weaver), and a human boy, Spider (Jack Champion), both of whom have mysterious origins. The relative price and harmony of the Sully clan always come with the knowledge that one day their enemies, the “sky people,” could return to Pandora. And return they do, threatening to decimate the homeland of the Omaticaya in an effort to find and eliminate Jake. Ever the tactically minded military man, Jake leads his family and retreats, hiding out among the Metkayina clan, a people who are one with the ocean in the same way that Netiri’s people are one with the trees. Jake and his family must learn a new way of living in order to survive being hunted.

I can’t go into much more detail about the plot, both because of studio embargoes against spoilers and also because there isn’t one. For all of the backlash against the first film for being too derivative of Dances with Wolves and Ferngully: The Last Rain Forest, at least it had a clear premise, a solid, three-act story structure and character arcs. Avatar: The Way of Water has none of those things, aimlessly meandering about for the three hours and 12 minutes of what I can only assume is exposition for the third film, broken up by dazzling underwater sequences and a fair amount of action.

As splendid as the effects are, however, it comes with catch. Cameron has chosen to shoot the film in the high frame rate of 48 frames per second, which allows us the immersive, 3D experience of walking into a Best Buy and stepping directly into a TV that’s been programmed to all of the wrong settings. While it looks marginally better than it did in its disastrous unveiling in The Hobbit: An Unexpected Journey, the HFR still takes away all of the nuance and artistry of the cinematography, making everything look too crisp and sterile, and quick movements look blurry and awkward.

Worthington and Saldaña are given nothing of substance to do, with most of the film’s haphazard focus set on Kit and her brothers, Neteyam (Jamie Flatters) and Lo’ak (Britain Dalton). Cameron has always been prone to inserting stock character types rather than writing characters, and he’s never been lazier about it than here. Dalton has a definite charm, however, and Weaver is terrific, clearly relishing the opportunity to play a teenager and doing so perfectly, even if the writing doesn’t give her character anywhere to go. Champion is a bit stiff, though he’s stuck in the weakest plot thread, which is saying a lot in this case.

I’m hoping that Avatar: The Way of Water plays better in 24 frames per second, but unless it becomes a totally different movie, I just don’t see myself ever seeing it again. I loved the original film because it combined cutting-edge technology with the feel of an old-school ’80s blockbuster to create a crowd pleaser. Sadly, Avatar: The Way of Water commits all of the major sins of an unnecessary sequel and serves up a big disappointment for fans and a smug affirmation for detractors. –Patrick Gibbs