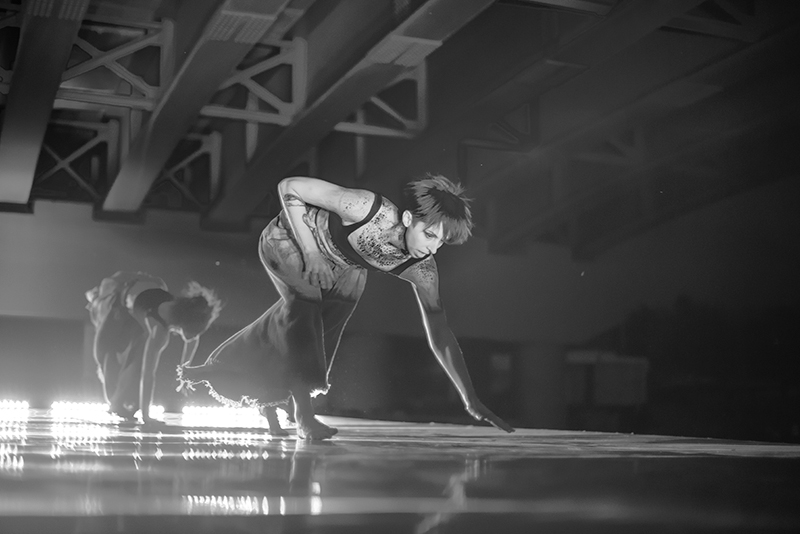 NOW-ID is currently the international dance company in Salt Lake City. It is the creation of choreographer Charlotte Boye-Christensen and her partner Nathan Webster. Boye-Christensen formed NOW-ID soon after departing from the Ririe-Woodbury Dance Company, where she had been artistic director for 11 years. In making this daring transition from a sweet gig into a precarious new situation, her determination was—in her own words—to produce the most “fiercely contemporary” dance possible and bring world-caliber emergent art to Salt Lake City.

But this will be yesterday’s news to anyone acquainted with Salt Lake’s thriving dance community. In the time of Diet Prada—characterized by compulsory originality, free cultural appropriation, an epidemic of influencers and rampant online artistic theft—nothing could sound more dubious than the promise of yet another “innovation” or “breakthrough.’” Today’s news, then, is how Boye-Christensen, in the midst of the current manic episode of the culture industry, has confronted the formidable challenge of keeping dance’s cutting-edge sharp, precise and relevant. How do you keep the “new” genuinely new?

In this instance, Boye-Christensen’s daring creative strategy was to perform an unexpected about-face. Specifically, she takes her choreography decisively in the direction of the abstract. Abstraction, or the exploration of pure form, was once the foremost characteristic of modern art. However, for the last several decades, some leading artists have instead worked to emphasize the specificity of performance times and spaces and the inescapable interconnection of humans and technology. Boye-Christensen herself has aggressively and shrewdly engaged in such phenomenological explorations. In particular, she has used a variety of more or less sophisticated props—mirrors, electric fans, scaffolding, treadmills, voice recordings and video screens—as a means of foregrounding the situated-ness of the body within optical, technological, commercial and other networks. While such choreography was indeed revelatory in its moment, it is now undeniably the case that the vast majority of us are often far more aware of networks, particularly online social networks, than anything else. Of genuine interest today is no longer the matrix and its discontents but, rather, what lies outside.

“NOW-ID returns dance to its most elementary components.”

Consequently, NOW-ID’s one-night production of Igor Stravinsky’s Rite of Spring, like much of Boye-Christensen’s more recent work, took place in a carefully selected outdoor location. Clearly, aligning the event with the summer solstice was another conscious choice. While it’s true that the site, beneath the on-ramp at 600 North, was chosen for its industrial aspect, anyone familiar with Boye-Christensen’s work will not have missed the performance’s surprising turn toward the “classical.” By classical, I refer specifically to Russian composers of the early-20th century, whose work rejected the emotionalism, psychology and melodrama (petty personal squabbling) that had become typical of program music. In an effort to jettison the narcissistic expression that bogged down the lively arts, they turned to folk tale, myth and ritual as sources of inspiration. Rather than private agony, they sought to explore the world of pure impersonal forces.

NOW-ID’s Rite of Spring surely took its cues from this modernist outlook. Such inspiration is overtly and unapologetically announced at the opening of the performance, when operatic baritone Joshua Lindsay wanders about the stage singing 19th-century German romantic lyrics, frequently delivered directly into the face of the unimpressed dancers. No other forced encounter could so clearly convey a sense of direct confrontation between opposed sets of values, emotional excess versus modern austerity. In the ensuing performance, NOW-ID returns dance to its most elementary components: mutually responsive gesturing bodies, pure music (unburdened by words or story), simple but non-quotidian costumes, and freedom from overbearing technology. This is the very antithesis of Wagner. The blankness of the mise-en-scene—an empty platform several feet above street level—could not have stood in greater contrast to the surrounding environment, consisting of a clutter of blacktop, concrete, street signs, suspended steel, parked semis and passing freight trains. Such assertive simplicity of this production became most evident mid-performance when one of the dancers collected and mutely contemplated clothing fallen from the other performers. This minimal use of props elegantly announced the complete and highly significant absence of guy-wires, mechanical apparatuses or projection screens.

“The overall trajectory of the dance seemed directed not into the heat of a crucible but rather out of the ashes.”

While Stravinsky’s masterpiece is routinely associated with uninhibited sexuality, it was refreshing to see how this production seemed blissfully unconcerned with instigating any sort of riot or scandal. Nothing struggled to be in your face. The choreography did indeed include close engagement between bodies, but most frequently, contact took the form of partnering rather than any sort of mimed, erotic coupling. Additionally, the choreography—pervaded by a sense of perpetual motion—included alternating passages of folk dance, galloping, trudging and swagger, bringing to mind dancers depicted on a Grecian urn. But rather than a Dionysian or orgiastic struggle to break out of the constraints of individual identity, the performance appeared to be a quest to gather and hold transient matter in some kind of recognizable and stable physical form.

This impression was enhanced by the canny use of intense red lighting and flowing rather than clinging costumes to give the dancing bodies the appearance of flickering flames (or firebirds). Still, the overall trajectory of the dance seemed directed not into the heat of a crucible but rather out of the ashes. In all this, any morbid fascination with death was replaced by steady attention to gestation and birth. The prominent role assigned to single or multiple performers of sitting and pondering one another’s travails reinforced this reflective mood. In true modernist form, NOW-ID’s Rite was self-referential, a creative act exploring the very nature and limits of creation. The entire production, presented in a moment glutted with sundry forms of entertainment and with patrons addicted to distractions of every sort, returned to the most basic questions: What is dance, why do we do it, why are we gathered here tonight under this bridge?

This last question prompts a consideration of overall production values. It seems clear that NOW-ID’s Rite adopts modernist abstraction as a temporary refuge from the current (not to say postmodern) technological landscape. Nevertheless, the engaging performance hardly ignored the surrounding environment. Rather, all preparations conspired to open a dialogue between artistic text and surrounding context. Even the visible metal risers on which the dancers performed, by dint of their bare utilitarian functionality, announced a connection between the opposed realities on and offstage. If there was any sort of synthesis in this polarity, it was achieved by the silent but mighty partner that presided over all the evening’s events. This was the massive on-ramp whose diffusely illuminated steel undercarriage served at once as both a ceiling and a sky. It may well be the case that we no longer inhabit primary and immediate nature—if we ever did. Nevertheless, NOW-ID’s performance of Rite begged to argue that veritable and compelling life events can still take place even within the confines of industrial, secondary nature. NOW-ID’s invitation was simply for us to notice this.

Where, NOW-ID seemed to ask, lies dance’s astonishing power to transform massive and looming steel girders into thin atmosphere? What is dance’s capacity to absorb our attention and to lift us, if only momentary, out of concrete practical reality—or the reverberation tank of endless digital pseudo-events—and into a world of pure form? For it is one thing to hold an audience’s complete attention in a darkened theater or enclosed art space and quite another to hold its attention on a street corner running adjacent to an active train track. Further, it’s one thing for an audience, once reminded, to put away its devices when the house lights dim. It’s quite another for hundreds of persons to refrain from all use of cell phones, in the open air on the corner of 600th North and 500 West, and without any prompting whatsoever. When, I found myself wondering as the performance came to a close, was the last time any of us have witnessed this kind of miracle?