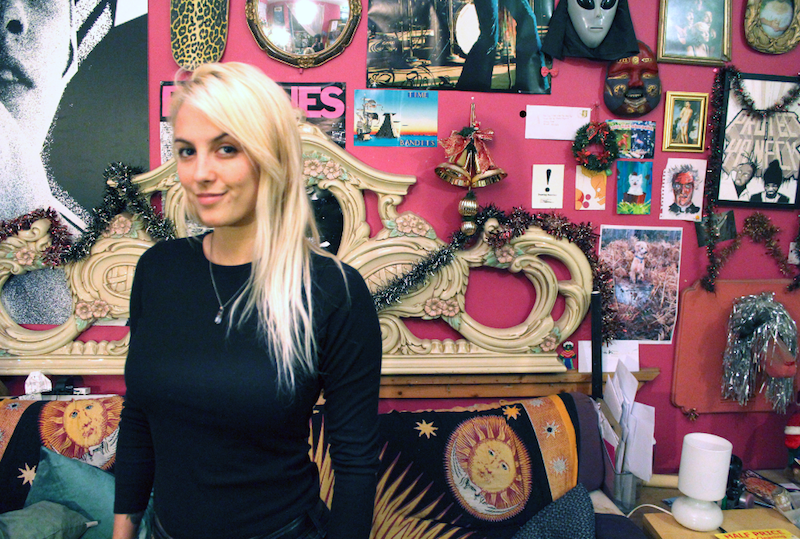 Each year, the Slamdance Film Festival, which emphasizes the creative force of emerging and independent filmmaking, enlists a featured artist to contribute their work to the showcase. For 2016, Slamdance chose to present the graphic art of Bristol, UK–based screenprinter and illustrator Rosie Lea. 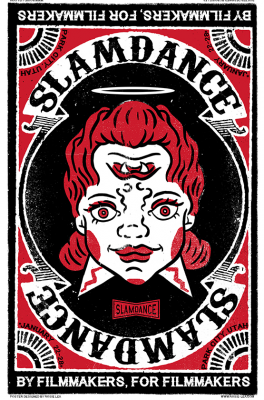 Slamdance is founded on a rebellious, unapologetic ethos as well as a mission that aims to showcase and foster alternative arts and culture. Like the spirit of Slamdance, much of Lea’s work, which consists largely of bold prints and gig posters, centers around the unexpected and subversive—as well as a bit of the diabolical. “It’s good to be involved with Slamdance,” says Lea. “I prefer the independent side of the arts, and the general DIY, punk and experimental nature of screenprinting—especially the carefully considered aspect of hand printing—is what initially drew me in.”

The 2016 festival’s “Saints and Sinners” theme was the ideal platform for Lea’s style, which traverses thick black lines, loud, flat colors, a punk-meets–pop art–meets-surrealist aesthetic, and a particular penchant for close-up faces bearing suggestive expressions. “In our showcase, you’ll always get plenty of surprising, offbeat characters,” says Peter Baxter, President and Co-founder of Slamdance. “Some are the best of the best, some the worst of the worst, and then there’s more holding duplicitous surprise. We wanted the new artwork to reflect these and also Slamdance as a whole: We’re not perfect—we get into trouble. Yet, Slamdance is bolstered by the saintly goodwill of its programmers, filmmakers and partners alike.”

With Baxter’s art direction, Lea’s completed Slamdance poster brings together angel and demon, conjoined into a single head with two faces: one smiling with short pigtails and long eyelashes, the other bearded and fanged. “The basis of good collaboration is trust and communication,” says Baxter. “Once you’ve communicated what you want, get out of the artist’s way and completely trust their work.” Referencing medieval manuscripts, vintage matchboxes and optical illusions, Lea added a mischievous and more digitally involved flair: The head spins back and forth between the two faces. “[Lea’s] work is playfully interactive and lets you decide whether you’re good, bad or both at the same time,” says Baxter. “Look one way, you see an angel. Look the other, a demon. Depending on how you see the image, or with one quick turn, you’ll go from saint to sinner and then back again.”

Despite having only been in the screenprinting business for a couple of years, Slamdance is but one of several impressive clients in Lea’s portfolio. Lea has created gig posters for the likes of Swans, Eagles of Death Metal and one of her personal favorites, L7, for which she drew an especially fierce rendition of the Hindu goddess of empowerment, Kali, replete with a snakelike tongue, unforgiving gaze and massive necklace of human skulls, all printed in hot pink and yellow ink. When prodded about her dream client, Lea doesn’t have anyone specific in mind—L7 was pretty high up there for her—but, she admits a little sheepishly, she’d like to do a poster for Aerosmith, “Though that would just be a fangirl thing,” she says. “It was always second nature to be doing something creative,” says Lea. “I’ve always been drawing and illustrating, but screenprinting has really been what I feel most comfortable doing, what I can most express myself through.” She recalls growing up with punk rock parents and having zines and graphic novels all throughout the house: “My dad was always in a band or drawing a comic, and my grandma—well, she wasn’t punk rock, but she was constantly getting me to make things,” says Lea.