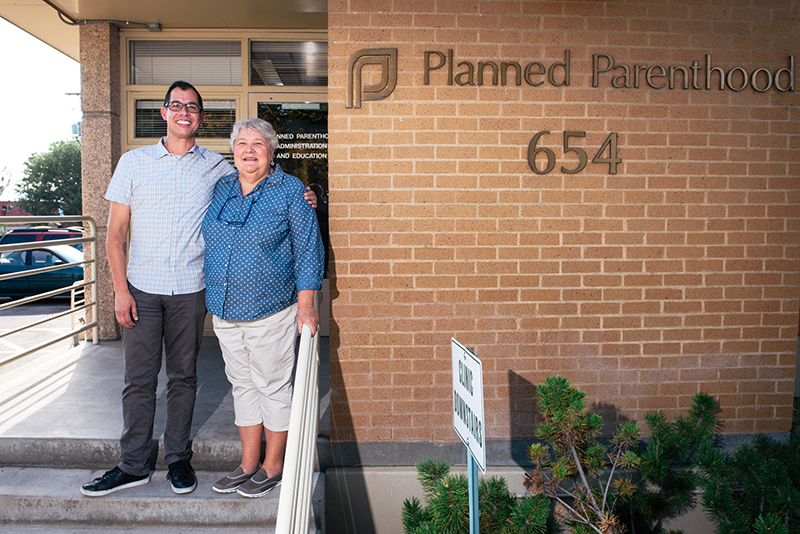 There’s been ample precedent for an art-and–Planned Parenthood alliance, what with runway shows featuring dresses fashioned out of condoms, IUDs-turned-jewelry and condom packages touting designs by famous artists. This month, the Planned Parenthood Association of Utah is forging its own art-making, action-taking collaboration for its upcoming signature fundraising event: The Art of Safe Sex.

The inaugural gala will take place on the evening of Oct. 24 at the Utah Museum of Fine Arts (UMFA), and it’s as fabulous as it sounds, with live music by the Joy String Quartet; heavy hors d’oeuvres and a signature cocktail; vignettes of period furniture by Mod a-go-go; the chance to explore the UMFA’s new exhibition, The British Passion for Landscape: Masterpieces from National Museum Wales; and, of course, an art auction. Planned Parenthood reached out to Jorge Rojas, artist, curator and the UMFA’s Director of Education and Engagement, to help identify and connect with other distinguished local artists about donating works of fine art for the fundraiser.

“My personal career has revolved around making art, teaching art and raising awareness about community issues,” says Rojas. “Those are the reasons I feel so compelled to contribute and participate in this event. Planned Parenthood does an incredible job of educating people—of empowering people about their own bodies, their own choices, their own responsibilities.”

There’s no question that plenty of other artists in the community will feel the same way about celebrating and supporting Planned Parenthood. “There will be something for everyone,” says Rojas about the auction, which will feature 40 local artists with works that will range in content and in price point, spanning mixed media, painting, photography, sculpture and more—Salt Lake Tribune cartoonist Pat Bagley will be bringing one of his signature cartoons to the mix, too.

Event organizers made sure that the gala would very much be a partnership, one that would respect local artists and their work while also involving them in the cause and community. “We want this to be a collaboration, because good, responsible sex should be celebrated, as well as beautiful, wonderful art,” says Karrie Galloway, Director of Planned Parenthood Association of Utah. Artists have the option to go for an extremely generous 60/40-percent split of the proceeds or to give an outright donation, and they’ll receive one or two complimentary gala tickets, respectively. The gala—which “will certainly be a very tastefully executed event,” says Rojas—will offer artists exposure as well as the chance to exhibit their works in a museum setting.

Additionally, in a fitting and certainly much-appreciated move, Planned Parenthood—keeping with the organization’s mission to make reproductive health services and education as accessible as possible—is offering various tiers of sponsorship levels for The Art of Safe Sex as well as individual ticket sales with young professional and student pricing.

Planned Parenthood hasn’t done a signature-type event in several years, but The Art of Safe Sex has been in the works since last spring—not, as some might think, as a response to the firestorm of controversy ignited last July by an anti-abortion group’s highly edited videos gone viral. As a result of the controversy, Governor Gary Herbert ordered all state agencies to stop funneling federal funds to Planned Parenthood—despite a “recent celebration of a decrease in teenage pregnancy and abortion,” says Galloway—most impacting funds for STD treatment and community-education programs. In response, thousands of bright-pink-clad Utahns showed their solidarity with Planned Parenthood, and that outpouring of support may continue to galvanize fellow artists and members of the community toward The Art of Safe Sex. “From my perspective, once I heard that media fiasco with all of this misinformation going around, I felt much more inclined to participate, to make sure that [The Art of Safe Sex] is a successful event and to support an important institution,” says Rojas.

Thankfully, Planned Parenthood has continued all of its services and programs. “We will be sharpening our pencils, thinking of ways to do as much as we have with less money, but we’re going to be right here, doing the same things for anyone who comes to Planned Parenthood,” says Galloway. Next year, they’ll be celebrating 45 years of service to well over 2 million citizens—many of whom are low-income and without health insurance. “We had 167 kids sign up for our education programs during the first week of school,” says Galloway. “We do over 17,000 chlamydia tests a year. We’re not changing any services. Planned Parenthood is not going anywhere.”

The Art of Safe Sex will make for a fresh, lively and elegant evening of celebrating and supporting Planned Parenthood—as well as local artists. Beyond rallying on the steps of the Capitol and donating funds, however, there are more ways to show your support for Planned Parenthood’s work as they continue to provide health care, education and empowerment throughout Utah. “Talk to people,” says Galloway. “Let people know that we’re still there for them, that we’re still providing care. Intersecting with the community, igniting conversations, talking about how the state of Utah should be—because we’re a pretty great state, but we’re not acting that way all the time. That, to me, is the most important part.”

The Art of Safe Sex will be held Oct. 24 at 6:30 p.m. at the UMFA. For more information about the gala and to purchase tickets, visit artofsafesexutah.com. To learn more about Planned Parenthood Association of Utah, visit plannedparenthood.org/planned-parenthood-utah and facebook.com/PPACofUtah.