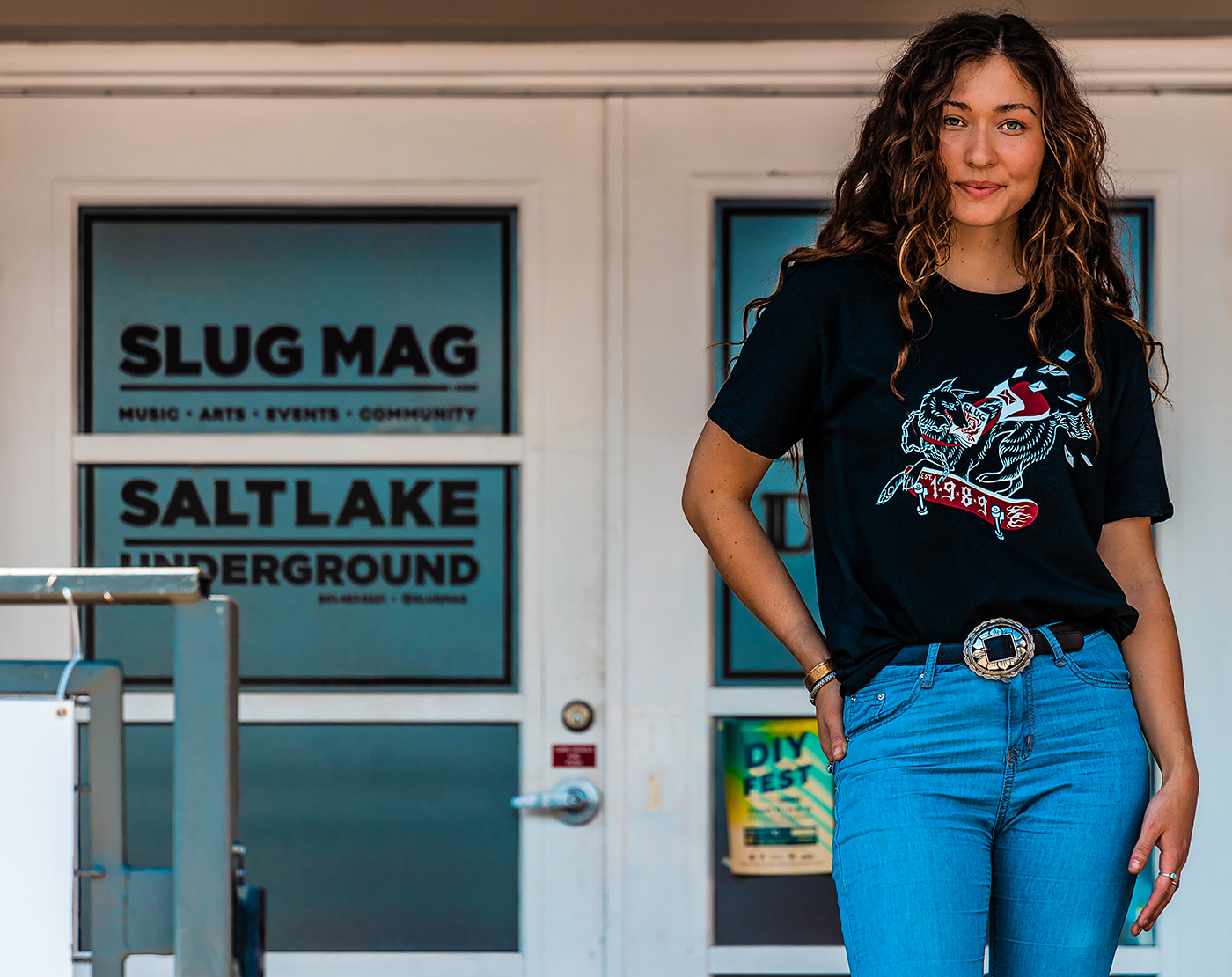 The Wolf Girl: A Look Inside Halley Bruno’s Art

Halley Bruno possesses the allure of a femme fatale akin to the likes of Salome and Cleopatra. An Artemis in her own right, she represents herself in her paintings enveloped by wolves and great cats alike. You can sense her warmth and free spirit spilling from her artwork, forming a sort of magic. “I can’t really remember a time when I fell in love with art, it always had a natural momentum to it,” says Bruno. “I started drawing when I was really little and being creative before I was even in preschool. My creative child was always loving murals on the wall. It’s an extension of my love for everything, my love for art, which is a really cheesy thing to say.”

Cheesy, but accurate. Bruno’s love of art grew from childhood to adulthood and is a representation of herself and her thoughts, a form of self-expression—a “manifestation tool” similar to her favorite artist, Frida Kahlo. “Her art was born through trauma. One of the first paintings she ever made was on her own body cast as she was in a hospital; from a disaster, like an accident,” says Bruno. “I love how self-reflective she is. She just paints herself throughout her life. Her paintings were almost like manifestation tools of power or ways to release emotions of sadness or anger.”

You can find Kahlo’s direction in Bruno’s own paintings. Her paintings elicit intensity, moodiness and wonder. They’re vulnerable but guarded. Much of her art depicts naked women surrounded by animals, similar to old myths. Moreover, mythology and symbolism are interwoven within her own work. “I went to Catholic school … and Catholicism has very heavy symbolism and mythology. And so I think my brain’s a little bit hardwired to it. I think everyone’s brain is to some extent, but I really love the myth[os] of them, of the great mother or like the sacrificial lamb, the dragon or the serpent,” explains Bruno. “Especially the dragon—it was kind of my entryway into mythologies of all different types. I think [mythology] plays out every day, all around us. And then if you really like to go down a rabbit hole, you can start seeing the patterns and everything.”

“I can’t really remember a time when I fell in love with art, it always had a natural momentum to it.”

Her paintings are not only inspired by mythology, but also of herself. In the repetitive presentations of wolves and snakes in her artwork, Bruno says that she is deeply inspired by snakes, but, identifies herself with the wolf. “I first started painting a lot of dragons and now it’s kind of changed or evolved into more snakes,” she says. “And for me, snakes represent wisdom, chaos and a little bit of danger. You know, a snake can bite you, right? But once it bites you, you have the wisdom of knowing snakes can bite you. They’ll hurt you. They make you more conscious because you have to be aware when you’re around them.”

She then explains that in different stages of her life she tends to identify with an animal, mainly one that she feels inspired by or wishes to emulate. “I wanted to identify with leadership and strength, but also a connection to natural cycles. So, in my art, the wolf kind of stands in for my own identity or how I wish my identity could evolve at this point. Now it’s kind of shifting a little bit.”

This shift between animals has also appeared in a new art form for Bruno: Burlesque dancing. “Right now, I’m in a bit of a big cat phase. I’ve been painting like a lot of tigers and panthers, and things like that,” says Bruno. “I’ve been very interested in the panther energy, and the new art form I’ve been doing a lot of is dancing, specifically burlesque dancing.” The persona that feels the safest and most authentic for Bruno is to express herself as a cat in her dancing, which usually entails cat ears and collars. “I’ve been kind of an evolution of my art. It has moved just from 2D to now embodying it. I paint a lot of wolves and cats, and now I act like a wolf and a cat in my life, which I love. It’s so silly and I love it.”

“In my art, the wolf kind of stands in for my own identity or how I wish my identity could evolve at this point.”

This reinvention of Bruno’s art and self through dancing has opened up ideas for ways to share her own and fellow artists’ work in the SLC community. “I’ve been more interested in creating my own spaces to show my art lately,” explains Bruno. “I’ve been kind of creating my own artistic community of dancers and musicians and painters, as well. I kind of want to expand my sense of art-making to include much more than what it was … Right now I’m in a stage of my life where I want to expand what I can do.”

One of those expansions is the release of her comic book, Skin and Bones, which currently has two chapters out on her website and follows a girl raised by dogs whose world is upturned by the arrival of a mysterious man. Told mainly through beautiful shades of yellow and blue and little dialogue, the story is gripping, but not overwhelming. “For my comic book, I just want it to be an expression of what I view freedom to be,” says Bruno. “I just want my art to feel real, to feel like it’s not being made for anyone else but myself—and for it to have integrity. I always want to be brave enough to express how I truly feel.”

Bruno’s art comes in many forms: paintings, drawings, dancing, comic books and now, t-shirts. For SLUG’s T-shirt design contest, Bruno’s design came out on top. It pictures a dog with a mail bag riding a skateboard, an idea that was spawned in the desert. “I was in the desert and Dylan [Bueche], the Circulation Coordinator for SLUG, texted me and was like, ‘Hey, there’s a T-shirt contest if you want to go for it,’ and I had three days to do it and I just knocked it out,” says Bruno. “I spent like, a full day and a half. Or maybe two days just working on that and only that, and then I sent it off. It was pretty spur of the moment. I was so happy when I found out I won. I was in the desert jumping up and down.”

The inspiration for the t-shirt came from years of being a dog walker and her perception of SLUG’s persona. “I was a dog walker for two years, so like, running dogs and wolves are kind of burned into my mind. I just wanted to put a dog in there because I love dogs and I’ve been learning how to skateboard, so I wanted to put a skateboard in there,” says Bruno. “And I just wanted it to be something that kind of represented how I view SLUG, which is kind of independent and slightly chaotic and a little subversive. So, like the dog stealing the postman’s bag, just skateboarding away with the new SLUG Mag, like something just kind of silly but honors myself and how I view SLUG.”

Bruno’s next adventure involves the release of the third chapter of her comic book, Skin and Bones, and finding a space for her and her fellow artists to share their art. Find her on Instagram @cinder.ash and catch up on her comic book at halleybruno.com. Preorder Bruno’s new SLUG T-shirt here.