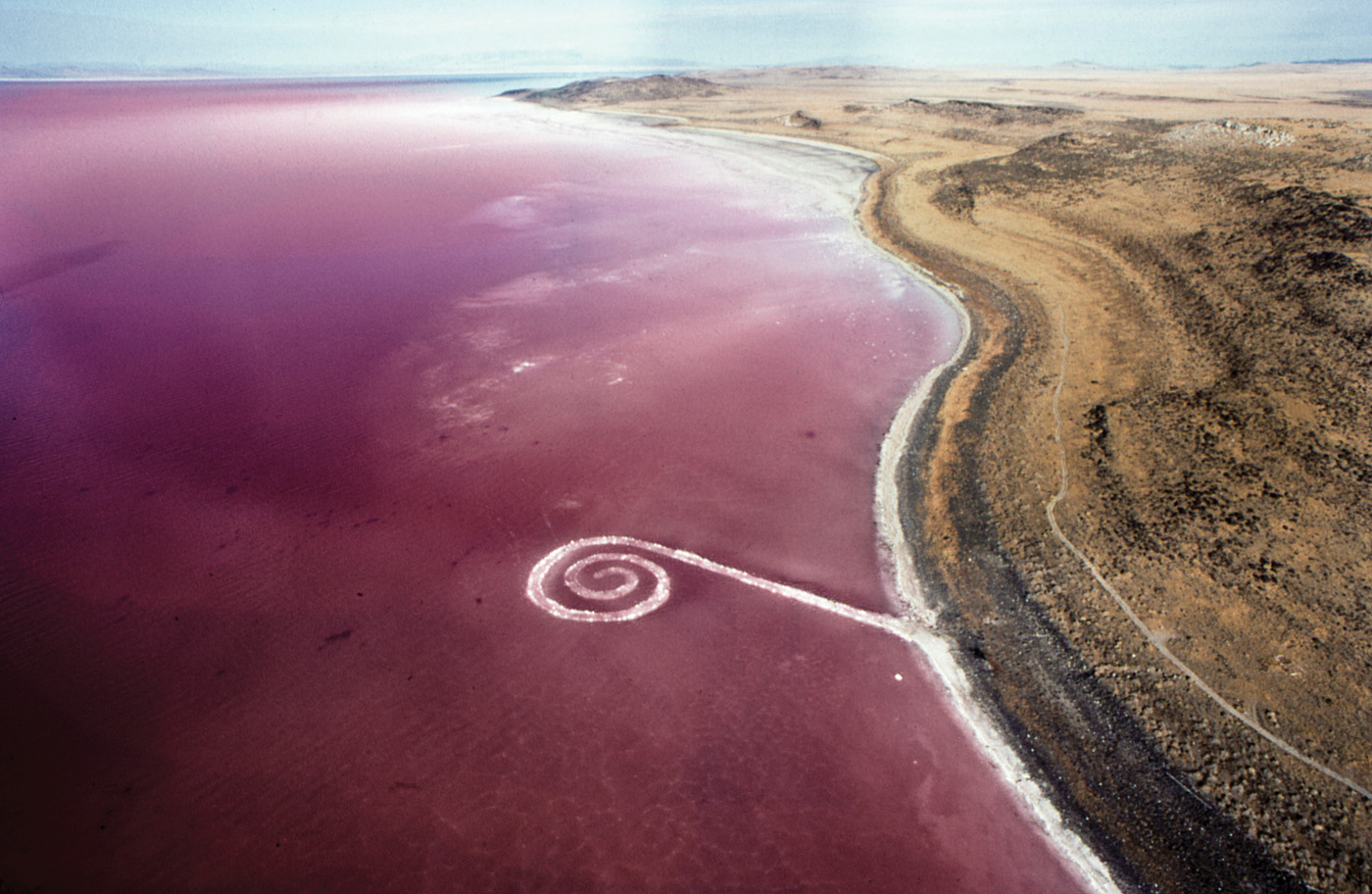 Located along the northeastern shore of the Great Salt Lake, Spiral Jetty is one of the most recognizable sites of public art in the country. In 2020, Utahns will celebrate the 50th anniversary of Robert Smithson’s monumental earthwork through exhibitions, programs, meet-ups through UMFA programming and more. On April 18, the museum will host a day-long birthday celebration full of art-making, tours, films and artist presentations. The day will also include a panel moderated by respected Spiral Jetty scholar Hikmet Loe.

Constructed in April of 1970, the Spiral Jetty is composed of rock and formed into a traversable coil extending toward the lake. After Smithson’s death in 1973, wife and fellow artist Nancy Holt managed his estate. In 1999, Holt donated the Spiral Jetty to Dia Art Foundation, which is now responsible for the ownership and stewardship of the land art. Dia works closely in collaboration with the Holt/Smithson Foundation, as well as the Utah Museum of Fine Arts (UMFA) and Great Salt Lake Institute (GSLI) at Westminster College to preserve, maintain and advocate for the Spiral Jetty. Part of that advocacy during the land art’s 50th anniversary is centered around celebrating through the aforementioned series of programs.

According to an informational pamphlet that Dia Foundation released about Spiral Jetty, Smithson often concerned his work with entropy, whose scientific definition Smithson identified as transformation due to “chance operations of nature.” When Smithson created Spiral Jetty, its visibility fundamentally depended on the rising and lowering water levels of the Great Salt Lake. Spiral Jetty thus responds to its surrounding landscape rather than “imposing itself upon it.” By and large, Spiral Jetty earned Smithson acclaim as a contemporary piece because of this and its other perceptual nuances.

“Spiral Jetty responds to its surrounding landscape rather ‘than imposing itself upon it.'”

Loe is an art historian and author of several publications about Spiral Jetty, including her most recent, award-winning book, The Spiral Jetty Encyclo: Exploring Robert Smithson’s Earthwork Through Time and Place. “As an art history instructor at Westminster College, I frequently fold in the development of the land arts movement into contemporary course content,” says Loe, “asking students to consider how our world has changed in the past 50 years.” Spiral Jetty has long been a source of inspiration to many artists—either through documentation, such as with photographer Gianfranco Gorgoni’s work, or through pursuit of transcendence, like writer Joel Long, who will be part of the panel. The panel, entitled “The Geopoetics of Robert Smithson’s Spiral Jetty: Local Artists and their Interpretations,” will ask several artists and writers to discuss the ways in which Smithson’s land art has impacted their own work.

Many people interested in land art around the world may never have the opportunity to experience Spiral Jetty in person, and even so may just experience the work once and never return. But Whitney Tassie, Curator of Modern and Contemporary Art at the UMFA, says it’s different for those of us living in Utah. “We’ve seen the work change with the environment, and we deeply understand the landscape—literally and figuratively—that grounds the work, and we are part of that landscape,” she says. “So, hopefully, our programs and exhibitions will emphasize this unique and integral relationship that we have with this internationally regarded artwork.”

“We’ve seen the work change with the environment, we are a part of that landscape.”

The many year-long celebrations planned by the UMFA include three exhibitions scheduled to open in the spring and fall of 2020. 50 Years of Spiral Jetty: Smithson and Gorgoni focuses on the late Italian photographer Gianfranco Gorgoni’s documentation of the construction of Spiral Jetty. The earthwork was submerged shortly after its construction and for a significant amount of time, so many have and continue to experience the work solely through Gorgoni’s photographs. Once it became visible again, Gorgoni returned to Spiral Jetty on his own accord, repeatedly making the pilgrimage to photograph the changes in the earthwork over time, a unique aspect that is central to the work.

In March 2020, the UMFA will highlight Smithson’s 1968 sculpture Nonsite, Site Uncertain, on loan for one year from the Detroit Institute of Arts. In conjunction with these exhibitions, the UMFA is hosting a series of interactive programs, including an open studio in which adults can make art inspired by the themes, ideas and materials of Spiral Jetty. A Spiral Jetty community meet-up and a number of high school programs are also in the mix.

Another exhibition will open in the fall of 2020 and speak almost directly to what Loe has asked her students to consider. The exhibition will aim to give a sense of the time and place in which Spiral Jetty was created. It hopes to use archival material to create a fuller picture of the local and global concerns permeating the University of Utah campus 50 years ago.

“The Spiral Jetty depends on the rise and fall of Salt Lake’s water levels, a unique aspect central to the work.”

“Have the calls to environmental action from the 1960s and 1970s been realized?” asks Loe. “Have we made progress understanding the multitude [of] ways that land use at these sites have been revealed, or ignored? Each earthwork or site-specific work lends itself to answer these and other questions, bringing the past to the present and making land art relevant today.”

With all of these celebrations, programs and exhibitions to look forward to, it doesn’t seem like relevance will be an issue, at least not for Smithson’s 1970 work. Exhibitions and programs celebrating the 50th anniversary of Spiral Jetty have already begun and will take place through winter of 2021. Visit umfa.utah.edu/spiral-jetty for more information about events.