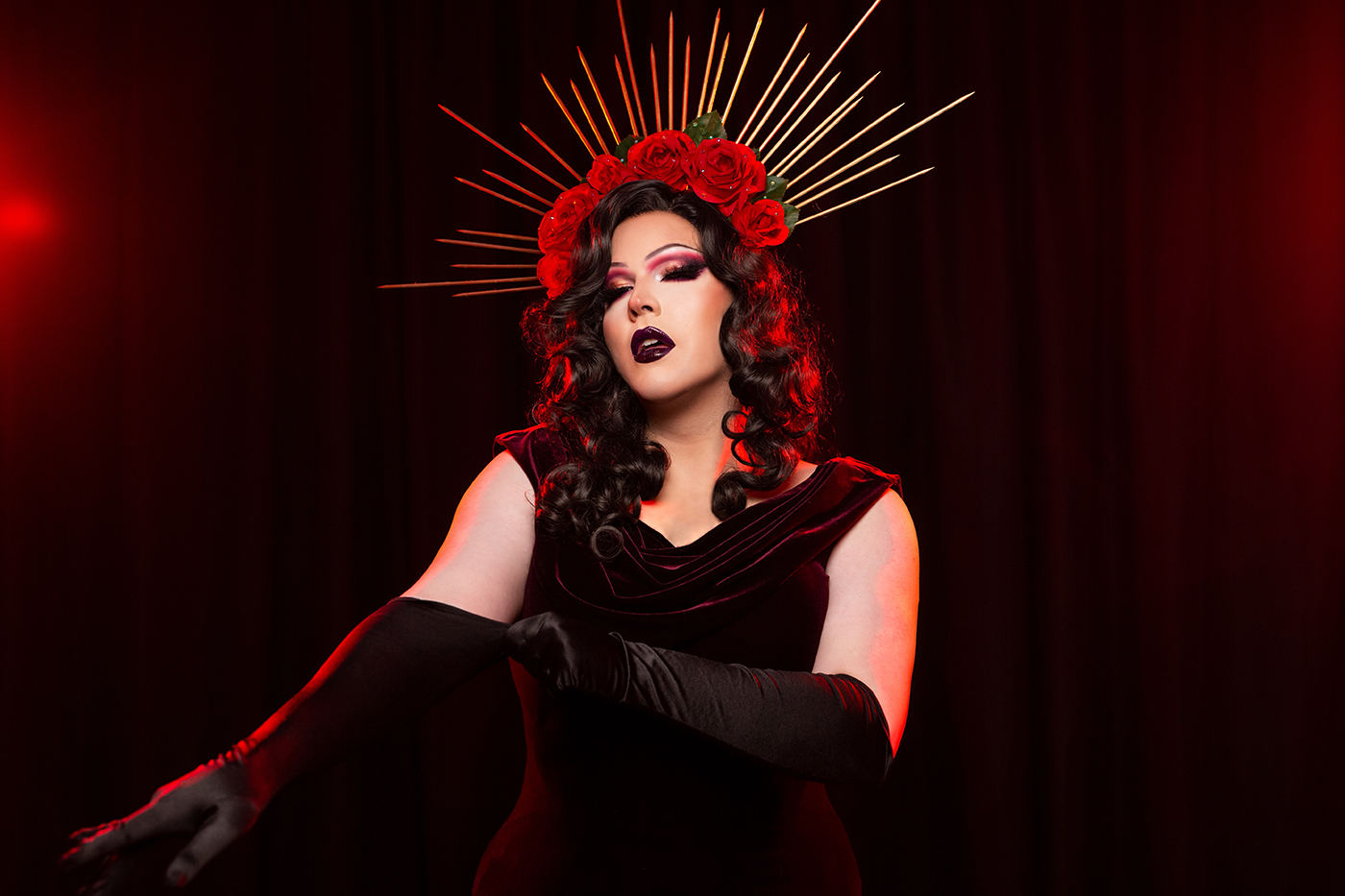 In a world where perfectly contoured creatures roam a landscape of glitter and glamour, Jordan Ruggeri is their dazzling monarch. This skilled makeup artist and captivating drag performer beautifies our world with every slaying look. Known onstage as Electra Jones, he explores themes of gender and identity through the art of transformation. As both Jordan and Electra, Ruggeri is a force to be reckoned with.

Ruggeri began courting the beauty community virtually, through video tutorials. Soon, what began as a hobby turned into a professional career and means of self-expression. Since early 2017, Ruggeri has worked in respected cosmetic spaces like Laura Mercier and Sephora. For years he mastered techniques elemental to classic, natural and glamorous looks. Painting the faces of others gave Ruggeri a glimpse into the realm of metamorphosis. “Life kind of pushed me in that direction,” he says. After long shifts creating masterpieces on clients, Ruggeri would return home only to surround himself with more makeup. Pouring over tutorials and learning the latest tips and tricks, he was hooked on the bewitching power of cosmetics. “I was always doing something makeup-related at all times,” says Ruggeri.

As his life became brimming with flawless cut creases and ruby-filled libs, one particular tutorial sparked a new flame in the young MUA. “I was watching a Miss Fame makeup tutorial, and it gave me new insight on how makeup could be,” he says. “I asked myself, ‘Are we going to take makeup seriously, or is this just a hobby?’” It would be an understatement to say that Ruggeri accepted the self-imposed challenge. His artistry eclipsed the boundaries of retail cosmetic stores to grace the faces of people throughout the country. He built a prolific freelance career working with models, brides-to-be and celebrities to enhance their existing elegance. “Painting others is about seeing the beauty in them and bringing out those features and qualities that makes them who they are,” says Ruggeri.

“I asked myself, ‘Are we going to take makeup seriously, or is this just a hobby?’”

Drawing inspiration from skilled drag queens pushed the limits of his makeup artistry, but as he peered into the window of glamorous gender play, Ruggeri felt another kind of calling.

All it took was a push from close friend Morgan Jones and the mentorship of drag mother Rose Nylon, and soon, a dazzling, young drag queen named Electra Jones was born. Built on a foundation of professional makeup artistry and authentic creativity, Electra hit Utah’s drag scene like a fallen star with a face beat for the gods.

Through the years, Ruggeri has explored the depths of Electra’s persona, and her aesthetic has undergone several revolutions. “In the beginning, I was going for a a housewife aesthetic and more of a vintage glamour,” he says. “But as I grow into [Electra] as a character, I think of her as a character that is living out my emo phase.” The current-day Electra is truly a gothic beauty, featuring makeup that is both sophisticated yet mysterious. An alluring, smoky eye and full-black lip are her go-to details, but her makeup is far from stationary. “It’s all about how I feel in the moment,” Rugggeri says. “Sometimes I look like a cute anime girl, or I do a dark-mistress vampira lady, so it kind of alternates between or somewhere in the middle.”

Electra Jones is certainly an enticing lady of the night, but behind that pretty face is a complex character acting as a conduit for Ruggeri’s self-exploration. “I started doing drag because, for a long time, I struggled with my identity not being the ideal man,” he says. Restricting expectations of masculinity offer little space for deviation, and as a queer person, Ruggeri experiences additional pressures of homophobia. Using drag to unapologetically explore gender expression is an empowering process, Ruggeri notes. Embodying Electra has paved a pathway to self-validation, and acts as a creative channel for expression. “She’s a visual diary of how Jordan feels and expressing the good and bad in my life,” says Ruggeri.

A powerful representation and stunning queen, Electra’s stage presence is equally poignant. Whether she’s lip-syncing to haunting requiems or bouncing around to Kingdom Hearts’ iconic intro theme, Electra’s energy is revival itself. The gothic queen has performed alongside drag legends like Tatiana and Nina West, as well as local icons including Rose Nylon and Silver Vom Blosh. More recently, Electra is featured in the digital drag series 8-B!TCH, where her unique performances grace the screens of hungry fans.

This gilded makeup artist and talented young queen is well on the way to greatness. Ruggeri’s flourishing brand is catching the eye of cosmetic kingpins, and Electra Jones wins the hearts of all who meet her. The next project on Ruggeri’s horizon is his upcoming YouTube channel, where he hopes to make tutorials for baby queens. Keep an eye out for updates on his Instagram @lolkthnxbabe, where he posts new showstopping looks every week. Support Electra by streaming virtual 8-B!TCH shows and tipping her on Venmo @JordanJMUA.