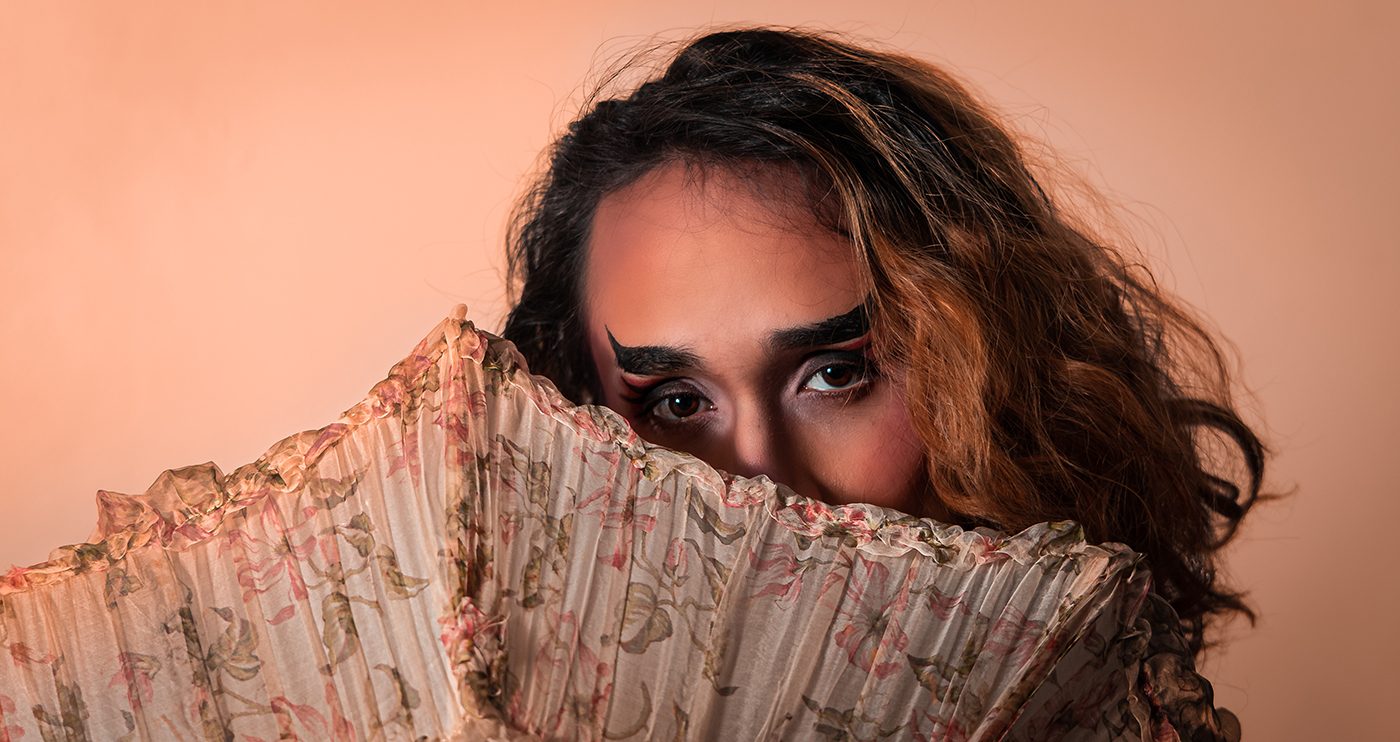 It takes a lot of pressure to make a diamond. Similarly, a lot of pressure and a hellofa lot of heat from the Las Vegas desert have created the coven mother of The Queer Cult and the self-proclaimed “time traveling drag thing from the 2070s”: the gem that is Lux St Diamond. This drag thing has taken the art of drag and transformed it into something magical, deep and visceral. It’s a performance that never ends because it exists on and offstage. Lux St Diamond is a drag performer and haus mother who has successfully provided families to those who needed one and safe spaces where there was once none.

Lux was born and raised in Las Vegas, Nevada, and grew up in a mixed-racial family. Surrounded by lots of family from Southeast Asia and the Pacific Islands, Lux grew up writing, dancing, playing piano, and playing video games. They began doing “drag” as a young 13-year-old. Lux says, “I started doing drag makeup because it made me feel comfortable and happy when I looked in the mirror, which wasn’t something I could genuinely say before that. I found out through [RuPaul’s] Drag Race that drag was an actual art form that could be practiced, and slapped some glue on my brows and began a journey of self-exploration towards a more authentic expression.”

Through drag, Lux was able to turn inward and learn about themself. “I’ve articulated parts of myself that I never had the emotional literacy to explain until I put it through movement and prose,” Lux says. “The ability to create a completely new persona not bound by the means of what you’ve been told you can be—whether that means flipping the binary switch on your gender or becoming a demon from the depths of the swamp—opens the mind and heart to grow further than you’ve ever expected. Drag is healing. Drag is strength. Drag is individuality.”

Through drag, Lux was able to turn inward and learn about themself.

Lux has been performing since they were 19 and got their start at Club Sound (or In The Venue, Bottoms Up or Kween, depending on the year) as a kicking, twirling, dancing drag queen. Since then, they have fallen in with “The Weirdos” who generally present a more alternative style of performances and focus more on emotion than movement.

“I’ve tried to put a focus more onto what the song makes me feel,” Lux says, “before how it makes me want to move. My drag still includes a lot of dance, because dance is a part of who I am, but I like to include a message behind every performance. I always like to try to have a story hidden behind every look, every song, every movement.” Lux also participated in theater when they were in school, “so I love starting a performance slow and steady, building up the emotion to the right hue, and then releasing it through more dynamic movements,” they say.

This installment of “Bold & Beautiful” runs in tandem with our February Local Leaders issue. In that spirit, Lux was asked what inspired them to create and lead The Queer Cult in SLC. Lux explains that they’ve been exposed to as a teen to some of the more extreme and dangerous parts of the queer lifestyle.

“From the age of 16, I was already engaging in sex work with people much older than me, having already been extremely sexually open on the internet for many, many years beforehand. I fell into circles that dealt with drugs that weren’t very kind. I came to realize how under-protected and underrepresented trans people and femmes were even in LGBTQ+ spaces. On top of all that, I’ve struggled with debilitating mental illness from a young age. And I knew someone had to do something to educate the youth about what there is out there.” In The Queer Cult, at The Queer Haven, Lux teaches their haus risk reduction, creating a judgment-free space to process trauma and to generally develop healthier lives.

“I knew someone had to do something to educate the youth about what there is out there.”

The Queer Haven, along with their sister collective The Haven of Hues, have been able to successfully create an all-ages space for queer youth to come together and safely express themselves as artists and individuals. This accomplishment is something that has brought great pride to Lux St Diamond. “During the pandemic, I’ve definitely taken more of the traditional mother role rather than the coven mother,” they say. “This time has been spent mainly tending to myself and the drag children. Performance art comes second to the human side of things. Take care of yourself before committing to performance, because nothing burns brighter than the fire inside.” That’s a powerful message that we all need to absorb and practice throughout our lives—not only during a pandemic.

This year has some exciting upcoming events Lux is planning for SLC to look forward to, particularly in the fall of 2021. Be sure to keep an eye out on Instagram @LuxStDiamond and @queercultslc for updates on shows and performances. And nothing helps support our local treasures like Lux St Diamond like a good tip! If you’d like to show them your support, you can find them on Venmo @lilylunara, Paypal at paypal.me/ladysaintdiamond and Cashapp at $WolfKit97.