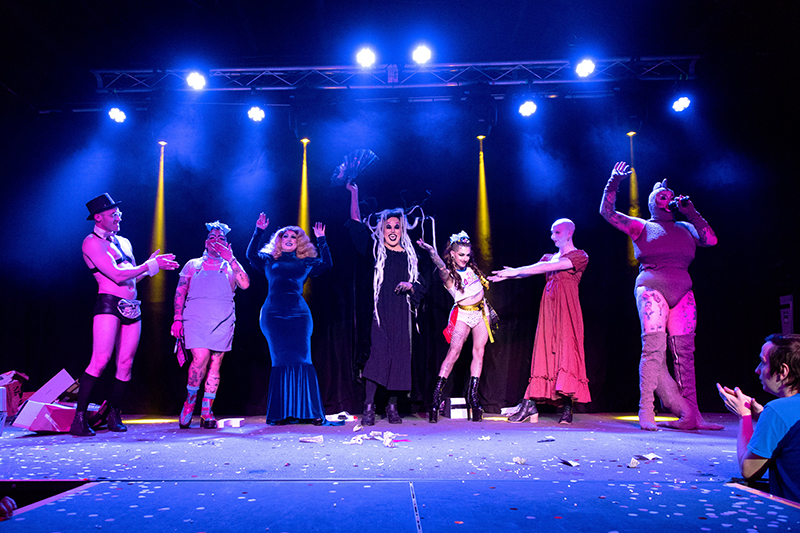 SLUG had the great displeasure of attending the vile Major’s Flavors event on January 16th, 2020. The event showcased some of the most grossly beautiful creatures we’ve ever had the honor of featuring. A combination of some of the greatest local talent and California’s finest monsters all came together at Metro Music Hall. The event only reaffirmed my love of our Salt Lake drag scene, as well as the influence our kings and queens have had around the world.

The evening was hosted by Ursula Major, who is an L.A.-based drag queen known for their terrifying presence in Season 1 of The Boulet Brothers’ DRAGULA. Ursula is a fierce queen whose intense looks are often accompanied by a gross sense of humor and a sharp wit—making them a perfect host for such an event. Although their time on DRAGULA came to an end way too fucking soon (eliminated in episode 2, the nerve), they’ve been working hard to further their drag career and it shows. The looks and performances Urusula curated that evening were fabulous. Be sure to follow them on IG @ifvckedursulamajor for some seriously killer cartoon-y faces on a sick BDSM bod.

Music for the evening was brought to us by M*SC, who SLUG had the immense pleasure of interviewing for a previous Creature Feature. There’s not much better than some bopping tunes presented by a big, hunky beefcake. It was a great time to shed some of the winter/inversion funk and shake some ass. Check him out on IG @chaunmike and show him some love.

The lineup for the night was pretty stellar (and the event started on time!), which made for an impressive weeknight show. Ursula brought several L.A.-based queens to share the spotlight with some local flavorites.

“Major’s Flavors brought together a rich collection of performers and artists from not only the Beehive State but threw in a few California nuts as well.”

Crystal Palace is a stunning, non-binary drag queen and drag king from Los Angeles, California. When female presenting, they’re known as Crystal Palace. As a drag king, they perform as Crys P. Tender. Crys the drag king initially came out, performing a stunning lip-sync to Bobby Darin’s “Mack The Knife”—in a killer sparkly tux coat, no less. They later transformed into the GORGEOUS Crystal for their closing number. How the hell they were able to do a full face redo from male to female in such a short amount of time only Satan knows. Follow them on IG @crystalpalacedrag for more gender-bending artistry.

Cherry Surbete dazzled the crowd with one of my favorite Roisin Murphy tracks, “Ramalama,” in a fit Mary Poppins would shank her for. They’re based in LA, so be sure to keep tabs on their IG @cherrysurbete for all the classic beauty looks this queen has to offer.

Spike PrinceOfCats is another L.A.-based performer and drag king of leather. Their look was one of my favorites of the night, featuring a head-to-toe leather/BDSM fit I wanted to take home to my own Daddy. Their show felt like something Dita Von Teese might do if she had a bigger package to show off. Check them out on Insta @spike7 to stay up to date on this sexy king’s artistry and future performances.

Lisa Dank aka Landon Orien, is a local queen who we all know and love. Her looks are always iconic, like your favorite Bratz doll with a perfect mustache. Plus, she never fails to look like the coolest mean girl in 8th grade. She’s a true pop princess and is always a pleasure to watch—sober or stoned. Support her by keeping track of her @landon_orien666 on Instagram.

“The event showcased some of the most grossly beautiful creatures we’ve ever had the honor of featuring.”

One Million Moths is a Salt Lake icon, artist and a pionqueer of drag. Their performances are truly spectacular and never something to miss. Combining costuming, makeup artistry, dance and music in each show, this queen figured out a way to actually take drag to another level. While performing legendary the Tori Amos’ “Professional Widow,” OMM literally oozed starfucker energy in a fiery, red wig and ethereal black robe. It was truly a bewitching performance. Later, they performed Imogen Heap’s “Hide and Seek,” switching gears from Amos’ fervor to Heap’s ardor. Both were truly beautiful expressions of artistry and both gave me full-body chills. Check out their plethora of talent on their IG @onemillionmoths.

Overall, this event was filled with colorful characters, glamor, horror and lots of goodass music and goodass vibes. We here at SLUG love our LGBTQIA+ family and local queens. Major’s Flavors brought together a rich collection of performers and artists from not only the Beehive State but threw in a few California nuts as well. The evening was well put together, well executed and inspiring. Y’all need to be sure to make it out the next time any of those kings and queens are performing—it’s our communal duty to show up for and support all our local and remote queer folx! Don’t forget to tip! –Kamryn Feigel