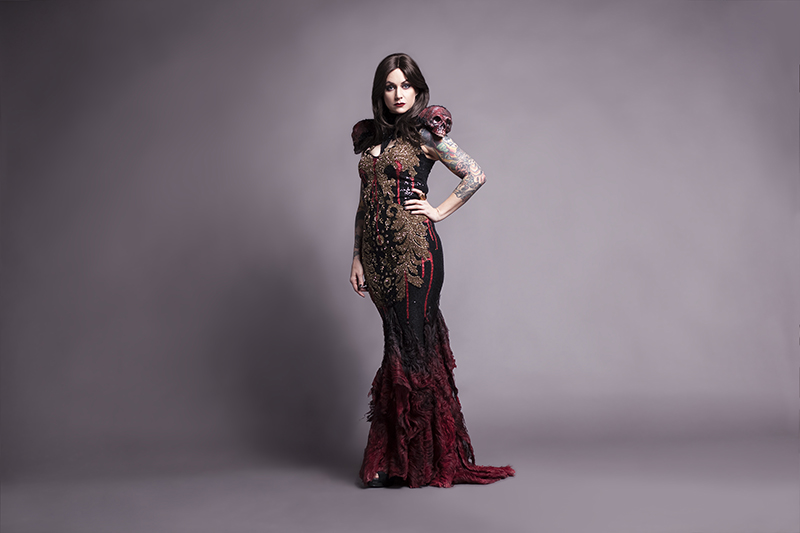 Andrea Hansen might easily be the most talented horror-couture designer in Salt Lake City. Not only is she a partner for the annual An October Evening, but she has also worked with various renowned photographers—including Yellow Bubbles—and has been published in numerous fashion magazines. Pretty Macabre is exactly what it sounds like—grotesque, horrific and high-fashion couture. “Since I was a kid, I’ve always been really fascinated with bloody, gory things,” says Hansen. “I went with the name Pretty Macabre because I love Victorian corsets, glitter, sparkle and the fanciest stuff—but I just want to drench it in blood.”

Hansen started her career creating beautiful yet morbid dance costumes in high school. While attending fashion school in California, she discovered that her passions lie with costuming. “I thought I wanted to be a fashion designer and do ready-wear,” she says, “but when I was designing in school, everything I drew was way costume-y. My teachers would tell me, ‘That’s too costume-y; no one is going to wear that.’ But I just wanted to make costumes and big, fancy gowns.” That’s exactly what she began doing.

When Hansen moved back to Salt Lake, she started bellydancing, aerial acrobatics, fire dancing and stilt performances—all of which required elaborate costumes. “I picked up random projects through friends who wanted costuming for performances or knew I could sew,” she says, “so they’d ask for bridesmaids dresses or something like that. I started getting busier and busier.” Hansen’s work is a mixture of performance costuming and walking works of art. One of her favorites is a rendition of the gut dress from the Alice: Madness Returns video game—she hand-sculpted realistic-looking intestines for a cosplayer, which was later showcased at An October Evening. Hansen is your go-to if you want a cosplay outfit for Salt Lake Comic Con, a high-fashion wedding dress, an elaborate steampunk outfit or an elegant dance costume. “As a designer, I want to be someone that people can contact to make unique costuming that we can create together,” she says, “something new, inspiring and interesting that plays off of the fantasy and horror realm—something that takes us out of reality.”

Pricing for a custom design starts at $100 and increases based on the fabrics used, but Hansen is happy to work out a payment plan for those who may not be able to immediately afford one of her killer outfits. Pretty Macabre also has a large costume shop with rentable items from iconic horror characters to dazzling ballgowns and more. Visit prettymacabre.com for details.