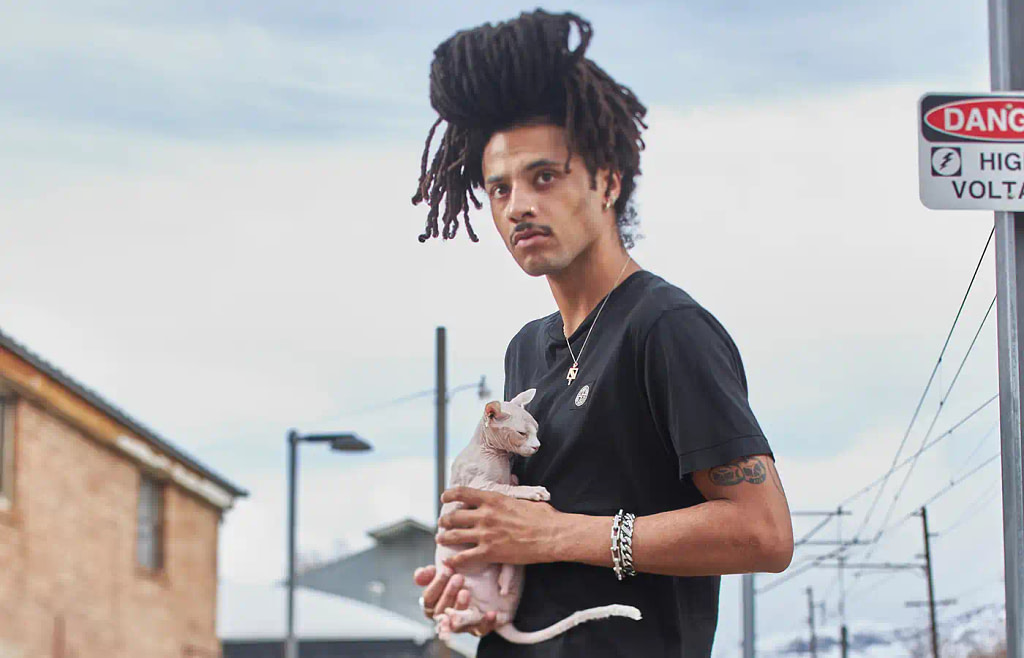 Lukas Mann is a Salt Lake–based model originally from Los Angeles who grew up skateboarding and snowboarding, which drew him to our outdoorsy state. Since moving to Utah, Mann adopted an 11-month-old sphinx cat named Laurel and later Reid. Mann, Laurel and Reid appear together in this Pets issue–themed SLUG Style photoshoot, and the results speak for themselves.

Every month, SLUG Style features a distinct member of the community and asks them why they do what they do. Exploring more than just clothing, SLUG Style is an attempt to feature the people who give Salt Lake City flavor through personality and panache.

What are your stylistic influences? This could be a band, designer, decade, fictional character—anything.

Lukas Mann: I am very heavily influenced by the fashion culture in Japan and their style of clothing. I grew up skateboarding, which has also impacted my personal style.

What has your experience in modeling been like? How do you bring your individuality into a shoot?

Mann: My experience modeling has been good overall. I’ve met a lot of kind and genuine people through modeling. I try to bring my individuality into a shoot by just being myself and how I personally would represent the brand.

What are your interests or hobbies? What is the hobby or interest that you have that no one would realize to ask you about?

Mann: Although I am not from Utah, I grew up snowboarding and have always been drawn to resorts Utah has to offer. I met my girlfriend here in Utah. Together we have three sphinx cats, which I love dearly. Growing up in Los Angeles, I have been influenced by car culture and spent time driving and racing cars as well as motorcycles. I love to travel—I’ve been to London, Paris, Mexico, Canada and several of the states. I am wanting to go to Australia in the near future.

Tell us about your pet family!

Mann: After meeting my girlfriend’s sphinx cat, I wanted one of my own. I have Laurel, [who] I got as a kitten [and] who is now 11 months old. I wanted Laurel to have a friend while I was at work and got Reid about two months ago. Both cats are very special to me and bring joy throughout my day. I love giving them baths and putting on their tiny shower caps. I love getting them new toys and training Reid to use the cat wheel. They are the most precious creatures. I look forward to coming home everyday and cuddling with them.

What has your experience been in moving from Los Angeles to Salt Lake City / Utah?

Mann: I originally moved to Utah for a change of pace, which I believe I have achieved. I adapt easily to new environments, and this move has been a positive experience. I have grown to appreciate Utah and met the love of my life here. My heart will always be in Los Angeles and I will be moving back with her after she finishes her last semester of school.

Are you always “on” or would someone see you at the grocery store, for example, with less elements of your style?

Mann: My girlfriend wanted to answer this one: ‘Lukas is always ‘on.’ Even at the grocery store or a gas station run, he is somehow effortlessly put together. His style is impeccable. It doesn’t matter if he is in a rush or we are running an errand. He always manages to look great. I may be biased but that’s what I see.’ –Faith

If you had to describe yourself in three words, what would those be?

How has your personal style evolved over time?

Mann: As I have gotten older I have come to appreciate the quality of clothing and not just how it looks. My style has definitely matured over the years, and I no longer DIY my wardrobe.