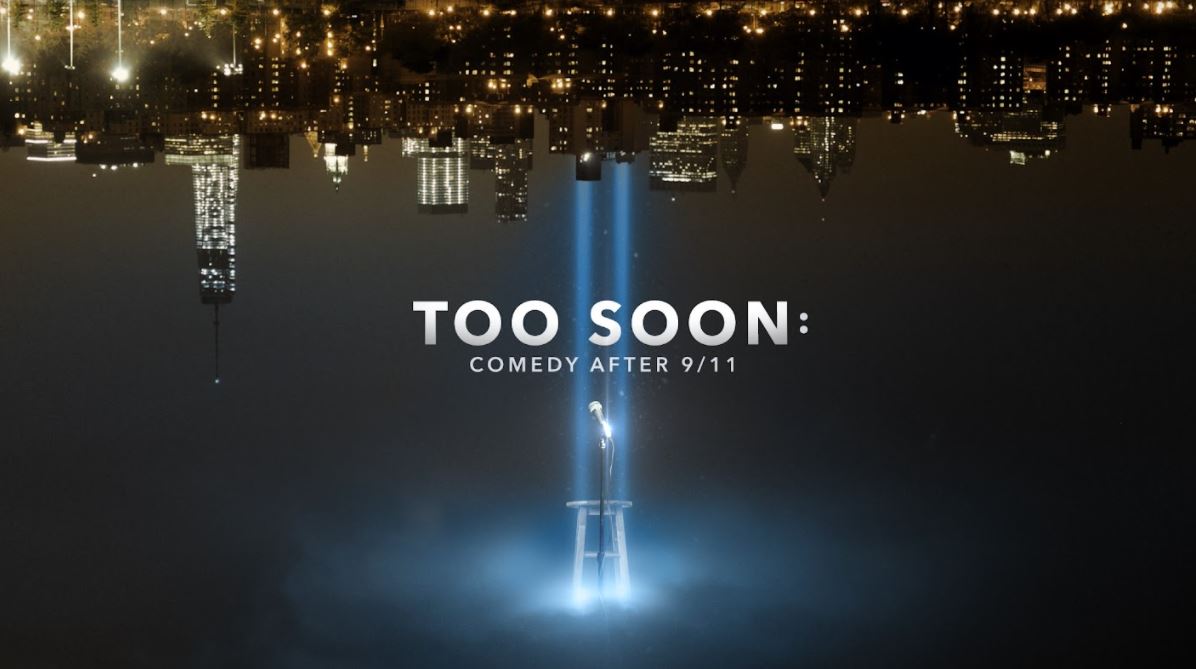 Filmmaker Nick Fituri Scown Takes on Laughter and Tears with Too Soon: Comedy After 9/11

Everyone remembers where they were when they heard the news that the Twin Towers of the World Trade Center came down. It’s indelibly etched into our collective consciousness. We remember the fear, the confusion and the sorrow. But do we remember when it was OK to laugh again? Too Soon: Comedy After 9/11 premieres on Wednesday, Sept. 8 at 10 p.m. MDST on VICE TV. It’s a new documentary from directors Nick Fituri Scown and Julie Seabaugh, who wanted to explore the sudden halt and the ultimate rebirth of comedy following the cataclysmic events of Sept. 11, 2001.

“I was actually in New York about a week-and-a-half or two weeks after the attacks because I was going to look at film schools,” Scown says. “Some of the still photos in the film are mine, and obviously, it left a mark on me.” Too Soon: Comedy After 9/11 mixes the controversial with the hilarious, and even the inspiring, exploring how stand-up comedians, Broadway performers, late-night hosts and others managed to help their audience laugh even in the darkest of days.

A few years later, Scown was watching a comedy documentary called The Aristocrats, which featured a sequence about comedian Gilbert Gottfried attempting to do a 9/11 joke at a Friars Club Roast, which was taped only weeks after the attacks. Gottfried’s joke was met with gasps and boos, and someone shouted the words “too soon” from the audience. “It reminded me that it was a really weird time,” Scown says, “where it seemed like: Are we gonna laugh again? Is humor dead? Is irony dead? So that kind of stuck in my brain.”

The idea of a documentary chronicling the state of comedy in a post-9/11 world was something that stuck in Scown’s mind for years, but when he didn’t know what to do with it. Scown read a book called The Four Hour Work Week, which contained the advice that if you have an idea that has been nagging at you for a long time, think of five people you could email who might be able to help you with it right now. Scown had met award-winning journalist, Julie Seabaugh at a friend’s wedding.

“She was a comedy journalist, and I thought, ‘Well, she’ll know if this is a good idea or not,’” Scown says. They had lunch together and both felt passionately about the concept, agreeing to make the film together. And so the process of making the film, which would take over five years, began.

“She was a comedy journalist, and I thought, ‘Well, she’ll know if this is a good idea or not,’”

“There’s the idea that tragedy plus time equals comedy,” Scown says, “and this was kind of the ultimate test of that. And what my co-director Julie and I found while making the film is that there’s more to the equation. Tragedy plus time plus comedy equals healing.” Scown points to the famous 9/11 issue of The Onion, the satirical paper that defined fake news back when the term meant something completely different, with the now iconic headline: “Holy Fucking Shit! America Under Attack!” which helped him to process how he was feeling at the time.

But the five-year process of making the film came with many challenges, not the least of which was trying to balance making sure they were comprehensive while, at the same time, recognizing that not every single joke was going to make the final cut. Scown says that everyone they spoke to for the documentary would have a strong memory of a comedic moment that meant something to them.

“It was a long process of finding clips,” Scown says, “and asking ourselves, ‘What are the touchstone moments for you?’ For a lot of people, it was Letterman coming back or Jon Stewart coming back.” The process of interviewing began, and when it was all over, comedians featured in the film included Gilbert Gottfried, David Cross, Janeane Garofalo, Marc Maron, Matthew Broderick, Aasif Mandvi, Rob Riggle, Nathan Lane, Cedric the Entertainer, Chris Kattan, Lewis Black, Doug Stanhope, Jimmy Carr, Russell Peters and more. In addition to its VICE TV premiere, Too Soon: Comedy After 9/11 will have a special commemorative theatrical screening at 2:30 p.m. PDST on Saturday, Sept. 11, at Hollywood Boulevard’s famed TCL Chinese Theatre.

“A lot of people are like, ‘I don’t know if I want to watch a 9/11 documentary right now,’” Scown admits. For him, the key was in leaving people with a reminder of the light that shone through in dark times. “We found a way through, and we even found a way through it laughing.”

Too Soon: Comedy After 9/11 offers a unique perspective on the first defining moment of the 21st century and it’s a poignant portrait of the resilience of the human spirit. It’s a fascinating chronicle of how America laughed, how we cried and how we thought for the first 20 years of a century unlike any other.