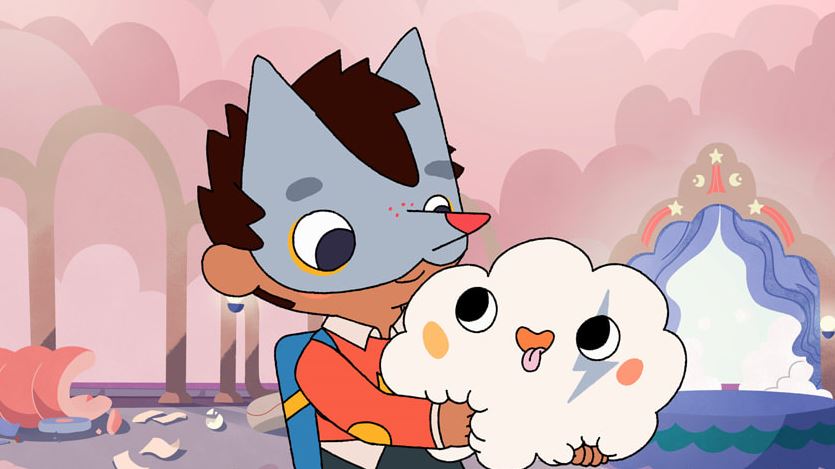 The world of television has gotten a little more whimsical and a little more magical this fall thanks to Toff Mazery and Joseph Gordon-Levitt, the respective Co-creator and Executive Producer of Wolfboy and the Everything Factory. The new series is a 10-episode animated fantasy series on AppleTV+ that follows an imaginative oddball known as “Wolfboy,” voiced by young actor Kassian Shae Akhtar.

Wolfboy and the Everything Factory is the story of a boy, William Wolfe, who likes to put on a wolf mask and call himself “Wolfboy.” Wolfboy doesn’t fit in at school, or much of anywhere, until he discovers a strange realm at the center of the earth where fantastical beings called Sprytes create things for the world up on the surface, including clouds, trees, rabbits, dreams, hiccups and literally everything else. Joining his newfound Spryte friends, Wolfboy learns that not only can he use the creative energy of the Everything Factory to make his wild imagination come to life, but that he is destined to play a central role in an age-old battle between the forces of creation and destruction.

“The show is all about creativity and imagination and fantasy and keeping that alive in your life,” says Mazery, who created the series along with Edward Jesse. “I think we tried hard to make sure we made it a slightly different kind of superhero story and not something that I’ve seen before where usually [there’s] a lot of fighting and stuff like that … We loved the idea of … ‘What would a superhero look like whose power is based on his creativity and imagination?’”

“The show is all about creativity and imagination and fantasy and keeping that alive in your life.”

Mazery and Gordon-Levitt met through the latter’s online collaborative media platform HitRecord, where Mazery goes by the username Wirrow. Gordon-Levitt, who rose through the Hollywood ranks starting out as a child star on 3rd Rock From The Sun before becoming known for films such as Inception, Looper and (500) Days of Summer, fell in love with Mazery’s work and believed that the talented artist and animator could create something that was more than the popular model of colorful, hyper-stimulating films that lack meaningful content. “This is a genuine work of art and something that’s coming so deeply from the heart of Toff,” Gordon-Levitt says, “And I think that anybody can feel that, whether they’re four years old or 40 years old.”

For Akhtar, who previously appeared in the Hulu miniseries Four Weddings and a Funeral, the fantastical story had a truth to it that appealed to him. “I can kind of relate to Wolfboy’s character,” he says. “In my old school … I didn’t really fit in and the school didn’t really accept me and my acting out of school. But now that I’ve joined my secondary school and I’ve been there for … nearly three years now … it’s like a new place where everyone is similar to me and the school accepts me and who I am. So it’s quite similar to Wolfboy and the human world and going to the Everything Factory.”

The 2D animation style goes against the norm for children’s television these days, which tend to heavily favor computer-generated animation, but Mazery and Gordon-Leavitt were enchanted by the idea of creating a child-like feeling. “One of the things that we first discussed is, ‘Wouldn’t it be great if this show looked like Wolfboy could have made it himself?’” says Mazery. “And that became a bit of a mantra in everything we were doing…  keeping it very organic and playful and a little imperfect.”

“This is a genuine work of art and something that’s coming so deeply from the heart of Toff.”

The casting process proved to be a pivotal time in the development of the series: just as important to fleshing out the characters as the artwork. Mazery and Gordon-Levitt agreed that there was only one right way to go about it. It was Mazery who first came forward with the idea of casting young actors as the voices of the kids, and it was far from a hard sell to his executive producer. “Because I grew up as a kid actor, I didn’t have to think twice about it,” Gordon-Levitt says. “There’s a stigma around young actors that I remember when I was a young actor [that] I think still persists today where people assume that … they’re kids, so they’re somehow … less-than as artists, but I think kids can be the greatest artists and the greatest actors.”

Wolfboy and the Everything Factory is a charming adventure that is sure to spark the imaginations of children and adults alike. For Mazery and Gordon-Levitt, inspiring people to sit down, draw and create stories of their own is the pinnacle of what they hope to accomplish with the series. Judging by early responses, their dreams may just come true.