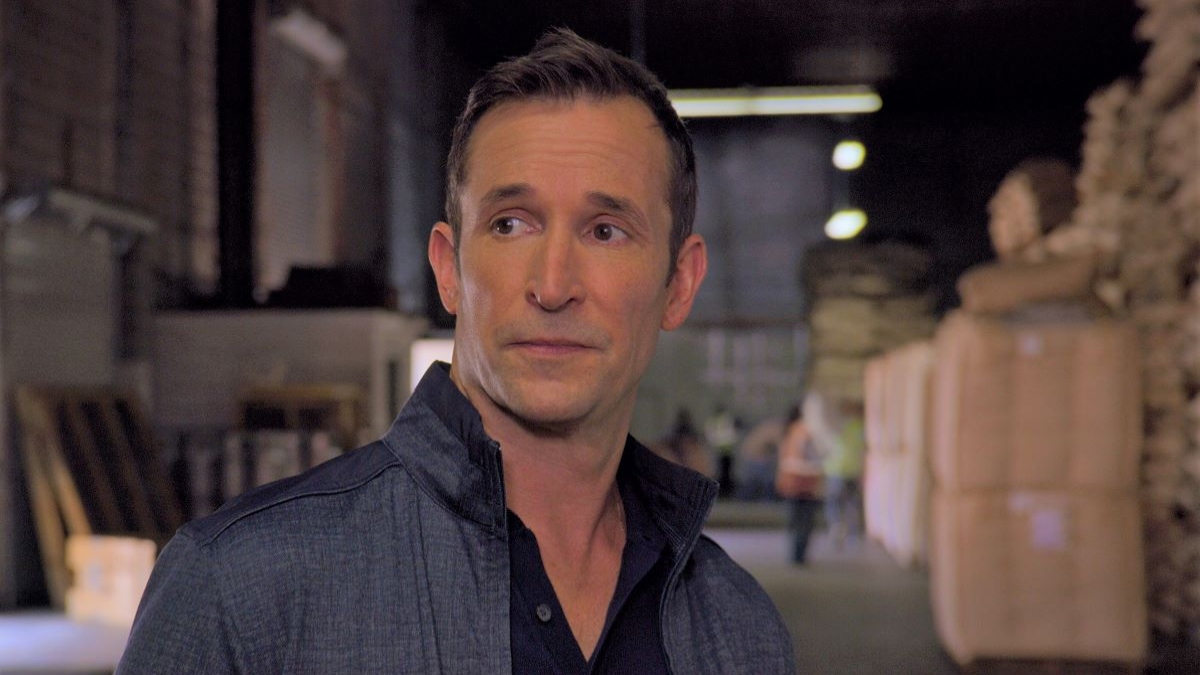 Noah Wyle Talks Pulling Off Cons With The Pros on Leverage: Redemption

It’s been almost 9 years since the hit series Leverage ended its successful run, but as Yogi Berra said, “it ain’t over till it’s over.” Executive Producer Dean Devlin (Independence Day) and series creators John Rogers and Chris Downey have brought The Grifter, The Hitter, The Hacker and The Thief back together for a revival of the beloved series, Leverage: Redemption, along with a new addition to the team: The Fixer. Harry Wilson, played by five-time Emmy nominee Noah Wyle of ER fame, is a corporate lawyer looking to atone for a career spent helping rich, powerful and unscrupulous clients get away with their misdeeds. But Harry does more than provide a new face and story element. For those of us who missed the original, Harry is our window pass into the world of Leverage.

“I like playing those characters. Not only are they the central focus of the narrative … But you also get to help inform the audience on how to feel about everything and everyone.”

“I like playing those characters,” Wyle says. “Not only are they the central focus of the narrative … But you also get to help inform the audience on how to feel about everything and everyone.” In the case of Leverage, that includes watching the characters’ spectacular displays of skill in each episode, whether it’s Hardison (Aldis Hodge) hacking into unhackable computer systems, Parker (Beth Riesgraf) performing dangerous acrobatic feats or Sophie Deveraux (Gina Bellman) constantly changing accents and personalities to pull off elaborate grifts. “I love John Rogers’ explanation,” Wyle says. “He calls it ‘expert porn’—tuning in to watch really, really talented people do really exciting things. But you have to have somebody that understands, in the relative world, how impressive these things are, and how rare they are, and Harry’s a perfect foil for that … He will tell the audience how impressive it all is by just how new it all is to him.”

Harry Wilson is where the titular redemption comes into play in the new series. “I was hoping I was the Redemption and not the colon,” Wyle says. It’s Harry’s desire to join this Robin Hood–like band of adventurous do gooders, and to acquire their skill set, that forms the arc of the first season.

Leverage: Redemption premiered on IMDb TV in July, becoming an instant hit with audiences, and eight, all-new episodes hit on October 8. “This is an unqualified success by any metric,” Wyle says. “And yet, I think we’re all waiting to see whether this is enough proof of concept to go and do another season. I’m hoping that everyone can get on board with it, because I think the second half of the episodes are stronger than the first—mostly because we fell into the rhythms and familiarity of the characters and the storytelling and figured out how to do it again. I would love to go back and pick up on that momentum with a season two.”

“This is an unqualified success by any metric, And yet, I think we’re all waiting to see whether this is enough proof of concept to go and do another season.”

While Wyle is new to this show, it was still a homecoming for him. Wyle starred in The Librarian, a trilogy of television films produced by Dean Devlin and his company, Electric Entertainment, and served as executive producer on the follow-up series, The Librarians, along with Devlin, Rogers, frequent episode director Marc Roskin and even Jonathan Frakes, Star Trek’s Commander Riker, who directed Wyle in two of the the Librarian films and returned for one episode of Leverage: Redemption.

“Dean has collected a group of people around him over the years that remain loyal to him because of his loyalty to them,” Wyle says. “We all go back to the well as often as we can, because it’s medicine for the other experiences we have when we work, where you don’t have a friend on set or it doesn’t feel very collegiate or you’re just a hired gun and there is no sense of family. Then you come back to an Electric Entertainment job and you feel like you’re coming home. You feel like you’re getting to play with your brothers and sisters again.”

For Noah Wyle, who also directed three episodes of the series, Leverage: Redemption was a delightful experience he won’t soon forget, and one that he and countless reviews are keeping fingers crossed that they can return to again in 2022. Only time will tell, but thanks to the work of the masterful teams assembled both on screen and off, time and fate definitely seem to be on Wyle’s side.