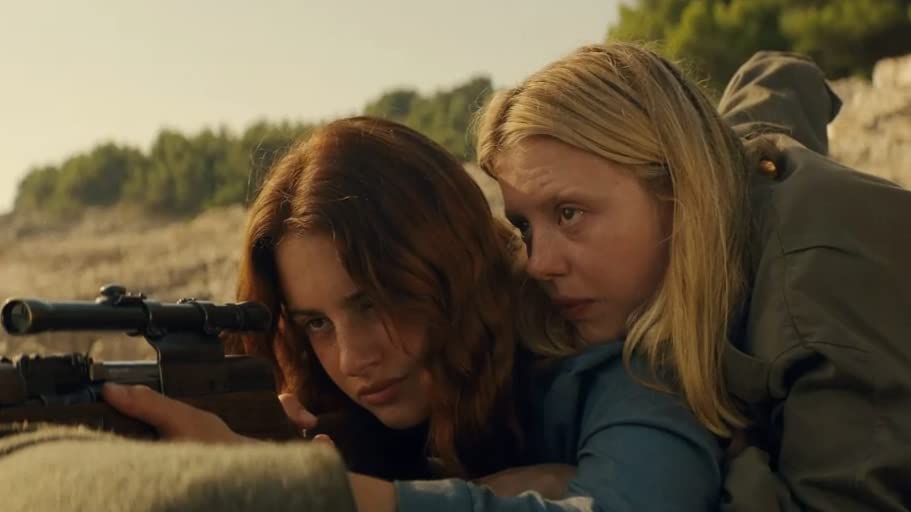 Cinematographer Sam Levy Talks Mayday, a Feminist Fantasy That is Calling Out To Audiences

The filmmaking process is nothing new for cinematographer Sam Levy. He’s been doing it since high school, when he started acting in a friend’s VHS movies. After falling in love with cinematography while studying at Brown University, Levy went on to shoot for an impressive list of directors including Kelly Reichardt, Spike Jonze, Noah Baumbach and Greta Gerwig. But Mayday, a surreal feminist action fantasy, marks Levy’s first feature with writer-director Karen Cinorre, his closest collaborator to date.

“Karen and I are life partners,” Levy says. “We live together; we work together. We have a shorthand. Usually, referencing photos or movies is a way to start building a shorthand with a director and start finding the visual language of a film. And a lot of the time, Karen I don’t necessarily have to do that … We’re living the work together.”

Mayday, which had its premiere at the 2021 Sundance Film Festival, is now playing in a limited theatrical run and on Video On Demand. Mayday follows Ana (Grace Van Patten, The Meyerowitz Stories, Nine Perfect Strangers), a young, overworked waitress working for an abusive boss at a seaside resort hotel. When a massive storm hits, Ana hears a mysterious voice begin to call out to her, spelling out “Mayday” in a phonetic alphabet. Ana follows the sound, which leads her to crawl into an oven, and she finds herself transported to a strange island ruled by a band of female warriors, living aboard a submarine and led by the tough-as-nails Marsha (Mia Goth, Suspiria).

“It’s an artistic story of transformation told through action. And that’s very satisfying to me as a film lover and as a filmmaker.”

These young women send radio transmissions to male soldiers to lure them to their deaths and launch preemptive attacks against any man they run across. Mayday is an audacious and creative film that plays out almost like a group therapy session between Peter Pan, Dorothy Gale, Gloria Steinem and Aileen Wuornos, all set inside an episode of Steven Spielberg’s Amazing Stories. Levy loves the analogy, and adds that The Wizard of Oz, Andrei Tarkovsky’s Stalker and the Greek siren mythology were all influences in one form or another. “But I really think Mayday presents a new kind of myth,” Levy says. “It harkens back to things we’re familiar with. It’s the young woman who’s finding her voice and becoming empowered, really learning how to live in the wake of very extreme physical abuse, and how abuse is processed by those who encounter it. But it’s done sort of metaphorically with this woman, who gets transported to another physical realm,” Levy remarks. Ultimately, he continues, “it’s an artistic story of transformation told through action. And that’s very satisfying to me as a film lover and as a filmmaker.”

After Cinorre laid out her concept for Mayday, the two discussed the possibility of making it as a short film. “I pushed to make it as a feature, right off the bat,” Levy says. “I really believed in her and this vision … It’s a very different kind of movie than anything else I’ve ever worked on … There’s lots of fights and motorcycle chases and explosions and underwater choreography, and there’s a dance number. It’s a lot of stuff that I’ve never gotten to do in feature films before … I thought, ‘This needs to be out there.’”

Mayday was shot digitally on the Alexa Mini with Cooke SF anamorphic lenses. This wasn’t an easy decision for Levy, who was excited by the opportunity to make an action-adventure film, which visually evokes some of the classic World War II movies of the ’60s and ’70s. He wanted to make sure it had the rich, cinematic texture that it deserved and was initially hoping to shoot on 35mm, particularly for the bright, daytime exterior sequences. “That’s where film is just superior,” Levy says. “There’s a lot of filmmakers, who, if they can afford it, they shoot film in the daytime, and then digital at nighttime. Digital is so much more sensitive; they can see infinitely more than our eyes can.”

The decision was ultimately a logistical one, in that there are no film labs in Croatia, where the film was shooting. The closest labs were in Rome and Berlin. Hence, Levy and Cirrone wouldn’t have actually seen any of their footage until 4–6 days later. But from the beginning, Cirrone had confidence that they could pull it off digitally and was interested in the ease that can come with the format, including the time that would be saved in not having to change out heavy film magazines.“I just sort of took all the pros and cons,” Levy says, “and I just thought that film might take away more than it would give us here. When it came down to it, I really couldn’t justify going to a lab out of the country, and we would have most likely had one day less in our shooting schedule. Once that became clear, [Cinorre] sort of took it off the table for us.”

“There’s lots of fights and motorcycle chases and explosions and underwater choreography, and there’s a dance number.”

While working so closely in a collaborative role with your significant other has strong advantages, does it lead to problems if creative visions don’t align? Not according to Sam Levy. “At the end of the day, she is the director,” Levy says. “I just love cinematography and everything that goes along with it. And part of that is deferring to a director, whether it’s Karen or anybody that I’ve worked with … I like to think I’m humble enough to say, ‘You know, they probably see something I don’t—and definitely [in] working with Karen. She’s brilliant, a very sensitive artist. And I know that if she’s saying something different from me, it’s something that she’s thought out very carefully.”

Mayday is a unique film and, hopefully, the first of many feature-length collaborations between Sam Levy and Karen Cinorre. They’re an exciting and gifted cinematic duo who bring with them a fresh perspective and a crackling creative energy. Whatever their next film together will be, it’s certainly something to look forward to with great enthusiasm.