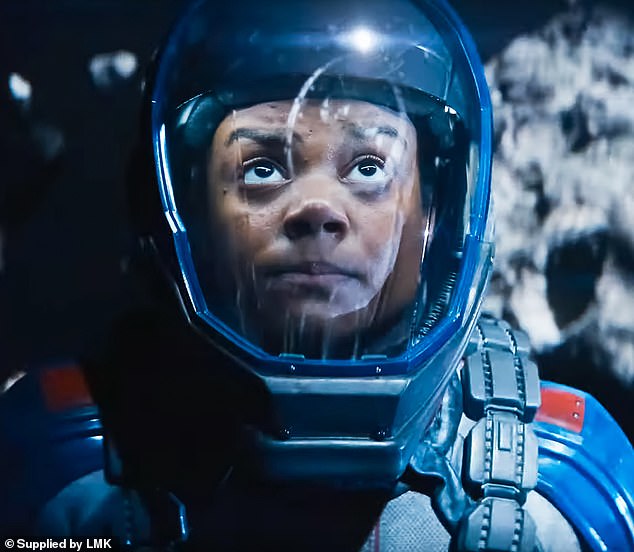 This fall is a big one for science fiction fans. The buzz for Denis Villeneuve’s epic take on Frank Herbert’s classic Dune has been building to a fever pitch, and waiting for October isn’t easy for many of us. But Dune isn’t the only thing that such fans are salivating over, nor the only literary masterpiece getting the big-budget treatment. Isaac Asimov’s Foundation, the Hugo Award–winner for All Time Best Series of science fiction novels, hits the screen for the first time ever on Sept. 24 in a bold new adaptation from Skydance Television and AppleTV+. And there’s one dyed-in-the-wool geek who got to watch it from the inside: actor Leah Harvey.

“I’ve always been a fan of sci-fi,” says Harvey. Their previous credits include Fighting with My Family and the 2018 miniseries version of Les Misérables. Harvey grew up in Newham, London, in a family of sci-fi enthusiasts, and Foundation was a favorite of Harvey’s grandmother.

Foundation begins thousands of years in the future on Earth, when the galaxy has become unified into a Galactic Empire. But when Dr. Hari Seldon (Jared Harris, Chernobyl)—an eminent “psychohistorian” who uses an algorithmic science that allows him to predict the future in probabilistic terms—sees the impending fall of the Empire, he and a band of loyal followers venture to the far reaches of the galaxy to establish The Foundation in an attempt to rebuild and preserve the future of civilization. The Foundation settles on a planet called Terminus, where Salvor Hardin (Harvey) serves as “Warden”: part Mayor, part Sheriff. It’s one of the most physically demanding roles on the series.

“I’d always wanted to be on wires and floating up in the sky and things like that.”

“Salvor’s the Warden of Terminus, which means that she has to look after everybody,” Harvey says. “She works outside a lot, and walks around the perimeter and makes sure everyone is safe. So I had to be ready for those kinds of things, walking a lot, running a lot, picking things up.” Harvey worked with a personal trainer to build endurance, and explains that the repetitive nature of shooting action sequences requires a lot of energy. “You run across a landscape, or you walk across a landscape—I actually did it ten times, but you only see it once.”

For Harvey, one of the most exciting parts was the opportunity to shoot sequences of flying through the stars in a space suit. “It was a quite dream come true, actually,” Harvey says. “I’d always wanted to be on wires and floating up in the sky and things like that. And then seeing the finished product was so exciting because it looks exactly how I imagined it would, which is always really satisfying. It means you’ve got people who are really good at their jobs.”

In the original novels, Salvor Hardin is a white male, but the vision of a futureworld in 1951 was quite a different one from what we now imagine in 2021. Series showrunner David S. Goyer, writer of Batman Begins and Man of Steel, chose to portray Salvor as a woman of color. Harvey believes that it’s a given that any show that’s trying to relate to people all over the world needs to include diversity in representation.

“Seeing the finished product was so exciting because it looks exactly how I imagined it would.”

“It’s really great to be involved in a show like this where that decision has been made,” Harvey says. “And the other lovely thing is that in the future, I would really like to think that we wouldn’t be dealing with these problems, where the fact that my character is a woman, the fact that she has brown skin, has absolutely nothing to do with her story. She’s just a human being dealing with problems, which is cool.”

Harvey is quick to praise the Foundation creative team. “David Goyer is an amazing showrunner,” Harvey says. “He really takes the time to talk to you about your character, to talk to you about the show as a whole, and to make sure that we understand what it is that we’re doing so that it all meshes together really well.” Harvey adds that developing the character was a collaborative process which included plenty of time talking with costume and prop designers. “I was made super aware of everything, and that really helped to create Salvor, the Salvor that you see onscreen,” they remark.

“The fact that my character is a woman, the fact that she has brown skin, has absolutely nothing to do with her story. She’s just a human being dealing with problems.”

Foundation, which also stars Lee Pace, Terrence Mann, Lou Llobell, Laura Birn and Alfred Enoch, is one of the major highlights of the fall television season and a great piece of storytelling. But for Harvey, it was also the opportunity of a lifetime, and a chance to make some unforgettable memories. “The day before I had found out that I got the role, I was asked to become the godmother to my friend’s child,” Harvey says with a wistful smile. “So that was a big week.”

Harvey is also a talented singer/songwriter, and their music can be found on the Leah Harvey YouTube Channel. Harvey hopes to record an album, though currently they are focusing on their acting career. Overall, with the first two episodes of Foundation set to premiere on AppleTV+ this Friday, showcasing the actor’s breakout-star charisma, it doesn’t take a psychohistorian to foresee a bright future ahead for Leah Harvey.