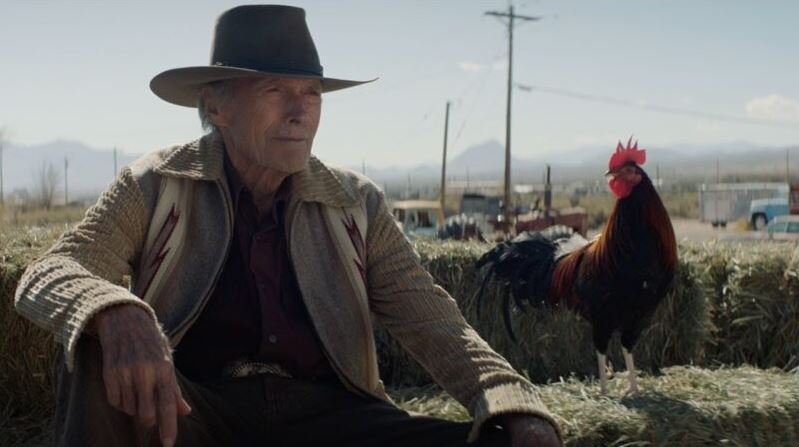 Malpaso Productions
In Theaters and Streaming on HBO Max 09.17

There definitely come times when expectations and baggage affect how one reacts to a film. I’m going to make it clear right off the bat that as longtime Clint Eastwood fan who has felt like he was testing my loyalty on every possible level for so many years now, I gave Cry Macho a lot of leeway for simply not being a total disaster.

Cry Macho stars Eastwood as Mike Milo, a one-time rodeo legend and washed-up horse breeder. In 1979, he takes a job from an ex-boss, Howard Polk (Dwight Yoakam, Sling Blade, Logan Lucky) to cross the border into Mexico and bring back his son, Rafael. It seems that the boy has grown up with his mother, whom Howard believes is abusing him, but Howard has legal troubles that make his leaving the country out of the question. In need of a tough, commanding person who can handle himself in any situation for a difficult job—wherein Polk hasn’t ruled out the possibility of kidnapping—he naturally turns to literally the oldest, frailest living human being he knows can still walk upright provided that a stiff breeze doesn’t take him out.

Mike reluctantly takes the job to settle a debt, and he sets off for Mexico. He meets the teenage “Rafo” (Eduardo Minnett), as he is known, a street-smart young man who ran away from home and is trying to make his way in the world through cockfighing with his rooster, Macho. On their way to Texas, the unlikely pair faces an unexpectedly challenging journey, during which the world-weary horseman finds unexpected connections and his own sense of redemption.

Cry Macho, adapted from the novel by N. Richard Nash, has been a long-gestating project that has gone through multiple possible lead actors. Both the biggest strength and the biggest weakness here is Eastwood himself. The selling point is watching the venerable screen legend in his third “final performance” since 2008, but he’s plainly passed the point where he is truly believable in the part.

Eastwood still wields a powerful screen presence, and the chemistry between the star and young Minett really works for me. But there are a lot of moments where Eastwood’s attempt to sell himself as this character, given his age and fragility, strain credibility past the breaking point. He may be a spry 91-year-old, but he’s still 91, and it really shows—almost no effort has been made to rewrite the character to fit that age.

This part would have been well suited to Kevin Costner or Tommy Lee Jones, both of whom could have added the gravitas that comes with age and weariness without coming across as Grandpa Simpson in the body of Mr. Burns, and certainly would have produced a lot less eye-rolling during any romantic sequences. Eastwood could have rocked this role back when he made Gran Torino, and I will argue with anyone that he still has some great moments even now, but it feels more than a little silly too much of the time. Still, I found myself enjoying watching him ride tall in the saddle again, though it’s hard not to notice that we never see him get on or off the horse by himself.

But the fact that I cared about the relationship between the old man and the boy counts for a lot, as does the picturesque cinematography from Ben Davis (Guardians of the Galaxy, Doctor Strange). Further, the sucker-for-westerns in me found myself enjoying the ride. After the utter disaster of The 15:17 to Paris and the disturbing and out-of-touch casual racism and sexism in The Mule and Richard Jewell, I found myself giving Cry Macho a pass a lot of the time for being Eastwood’s most goodhearted but least heavy-handed film since Sully.

Cry Macho should be the last ride for this icon, unless, perhaps, he finds a killer script that suits where he now is in life. No, this wouldn’t be the best swan song he could ever hope for, but it would be far from the worst. It’s strictly a film for those with a strong sentimental attachment to Clint Eastwood, and I guess I’m one of those people, because I can’t bring myself to praise it or bury it. –Patrick Gibbs