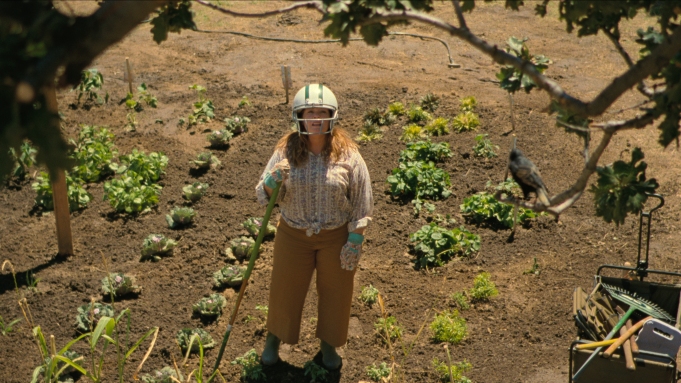 Photo courtesy of Limelight and Entertainment One

Limelight and Entertainment One
Streaming on Netflix 09.24

We’ve all been asked the question, “If you could be granted three wishes, what would they be?” The second wish is far too political in nature to share here, and the less you know about the third, the better, but my first wish would have to be “Can Melissa McCarthy please make two watchable movies in a row just once in her career?” The Starling is the latest example of why this is the number-one wish.

The Starling stars McCarthy as Lilly, a woman whose husband, Jack (Chris O’Dowd, Mascots, The Cloverfield Paradox), has been hospitalized for psychiatric after a suicide attempt, which followed the tragic death of the couple’s baby daughter. Lilly remains in the “real” world, dealing with her own guilt. As if Lilly’s troubles weren’t bad enough, a starling that has nested in her backyard begins to harass and attack her, and she becomes comically obsessed with killing it. Lilly eventually finds guidance from Larry (Kevin Kline, Silverado, A Fish Called Wanda), a psychologist-turned-veterinarian. The two form a unique and unlikely friendship as they each help the other to explore, acknowledge and confront their problems.

Director Theodore Melfi (Hidden Figures, St. Vincent), whose work I have enjoyed well enough in the past, is out of his element here. He makes a fatal mistake by shooting this film, which needs to be played as an intimate character study, in the widescreen 2.35:1 aspect ratio. This only succeeds to create a greater feeling of distance and an attempt to cover a weak script with Hollywood glossiness. The effects are also a huge problem, as the titular bird often looks like he belongs in a Peter Rabbit movie as opposed to what is ostensibly a serious drama.

But the biggest mistake that Melfi has made is championing an insipid, cloying and borderline incompetent script from Matt Harris, whose biggest credit to date is the television show Totally Outrageous Behavior. The story is filled with so many contrivances and so much on-the-nose symbolism that the dialogue occasionally feels the need to reference it. And while this intends to be charming or quirky, it more often comes across like an awkward attempt at an apology. The actors are doing their best, and all three leads are consummate professionals, but while I found it pleasant to see Kline again—even if he is playing an outrageously gimmicky character—I just felt sad to see McCarthy and O’Dowd putting so much effort into unsalvageable material.

The entire plot involving Lilly’s war with the bird is a misfire filled with slapstick that borders on imbecilic, and the moment when the metaphor is spoon-fed to the audience is insulting and clumsy. Harris’ script was on The Black List, an annual survey of the most well-liked unproduced scripts, and this film may well demonstrate the importance of remembering that the word “unproduced” is in there. Yes, you may sometimes find something great among the leftovers, but the best of what nobody wanted is still relative and unpredictable. For example, The Starling is still arguably McCarthy’ best film this year, but all that means is that the other one was Thunder Force.

The Starling isn’t entirely without merit. But it’s as artificial and weak as big-budget Hollywood dramedies get, from the stock supporting characters to the silly situations to the cornball dialogue. Its best hope for escaping The Golden Raspberry Awards is that it may not be memorable enough to be in anyone’s minds by March. –Patrick Gibbs