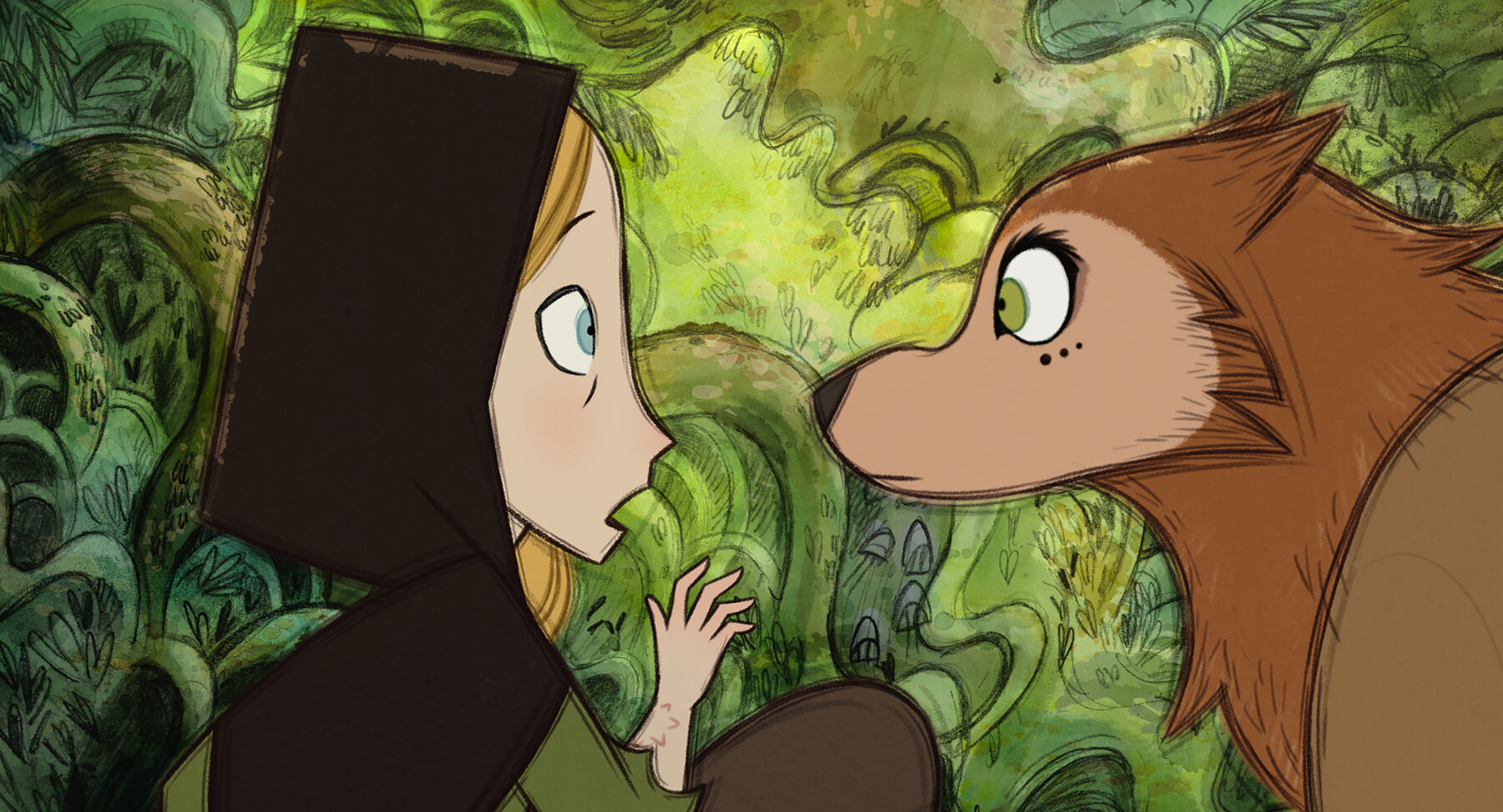 While so much of mainstream animation these days is dominated by CGI, Tomm Moore and Cartoon Saloon, the studio he co-founded in Kilkenny, Ireland, have been breathing magical life into the old-school world of hand-drawn animation since 1999. Moore’s two previous features films, The Secret of Kells and Song of the Sea, were both nominated for Academy Awards for Best Animated Feature, and all signs point to Moore and his co-director, Ross Stewart, continuing that streak with the highly acclaimed Wolfwalkers, which premiered on AppleTV+ on December 11.

This enchanting new film is set during the English colonization of Ireland, a time of superstition and magic. Bill Goodfellowe (voiced by Sean Bean of The Lord of the Rings Trilogy) is a hunter sent to a remote outpost to rid the surrounding woods of wolves, taking his young daughter, Robyn, with him. While she is exploring the forbidden lands outside the city walls, Robyn befriends a wild child named Mebh MacTíre, who belongs to a mysterious tribe of shapeshifters who appear in human form while they are awake, but inhabit a wolf form while their human bodies are asleep.

“It was something very consciously cooked up by Ross and myself about seven years ago,” Moore says. “We wanted to make a third film in this kind of triptych or trilogy of films that started with Secret of Kells.” Moore and Stewart sat down with a notebook and made a list of themes that they were passionate about, which included species extinction and habitat destruction. “And then we looked at the fact that there was folklore from the area here in Kilkenny where we grew up, called the Wolves of Ossory.” Moore says. “And that was about people that had been pagans and wouldn’t convert for St. Patrick, so they were kind of cursed to become wolves when they fell asleep. So we just thought there was the makings of a story there.”

“It’s a story of not just controlling society but also taming nature, destroying the forests.”

Wolfwalkers‘ heroine is a young girl named Robyn Goodfellowe, voiced by Honor Kneafsey. If the character’s name sounds familiar, that’s because it’s the moniker of one of the most famous magical characters in literary history: Puck from William Shakespeare‘s A Midsummer Night’s Dream.

According to Stewart, who worked as art director on The Secret of Kells before graduating to co-director on Wolfwalkers, the nod to Shakespeare’s woodland sprite is meant to remind us that there are two sides to the English colonization. The villainous Lord Protector, who commands Robyn’s father, represents a new form of control over the people. “But there is also an older English folk way of living, a fairy tale belief.” Stewart says. “So that you know there isn’t … They aren’t just put, like, one sided, that there is a deeper depth to that culture there, too.”

The Lord Protector was based on Oliver Cromwell, who led an invasion of Ireland from 1649 to 1653. Because the film is fiction, the filmmakers chose not to directly use Cromwell’s name, but to invoke him by using his infamous title. “He led a fairly ruthless campaign through Ireland, not just subjugating the Irish nation, but also had a determined effort to make wolves extinct,” Stewart says. “It’s a story of not just controlling society but also taming nature, destroying the forests.”

Against The Lord Protector’s tyranny, Screenwriter Will Collins says that one of the central themes of the film is finding balance between the wild elements of nature and the rigid confines of society “That’s a very universal message in regard to our relationship with nature, with regard to our relationship with ourselves and with our fellow human beings of all different nationalities,” Collins says, adding that this “boiling point” in Irish history was a perfect place in which to set the story “It was a catalyst for hundreds of years of trouble to come, really.” Collins says.

“You can use technology to make it more efficient and maybe more interesting, because you can try different things.”

Wolfwalkers uses traditional 2D animation, in an eye-popping, stylized approach that resembles soft watercolors. “I think in terms of the industry, like, we were told when we were leaving college that the 2D was dead and … if not dead, was dying,” Stewart says. “And there’s more and more 2D animated features coming out year on year.”

But while Moore and Stewart are very much proponents of hand-drawn animation, for them, it’s not an either-or issue. “I honestly don’t mind [modern animation styles]. I have a little grand-daughter and she’ll watch Frozen and then she’ll watch The Sword in the Stone,” Moore says “She just gets up into both of them. So I think the idea that kids will only accept Pixar-level CGI … has been proven wrong by more and more stop-motion and hand-drawn animation coming out. And it’s just as appealing or has its own place anyway within the industry, hopefully.”

While Wolfwalkers was hand drawn, it did make use of new technologies to push the envelope. “You can use technology to help you make more traditional animation faster, and you still do the full hand drawn primal look,” Moore says. “But you can use technology to make it more efficient and maybe more interesting, because you can try different things. So yeah, it’s a nice combo, I think.”

Wolfwalkers is a must see for fans of animation, and should be equally appealing to those who are fascinated by world history and those who just wanted to escape into the realm of the fantastical for a while. Wolfwalkers is available now on AppleTV+.