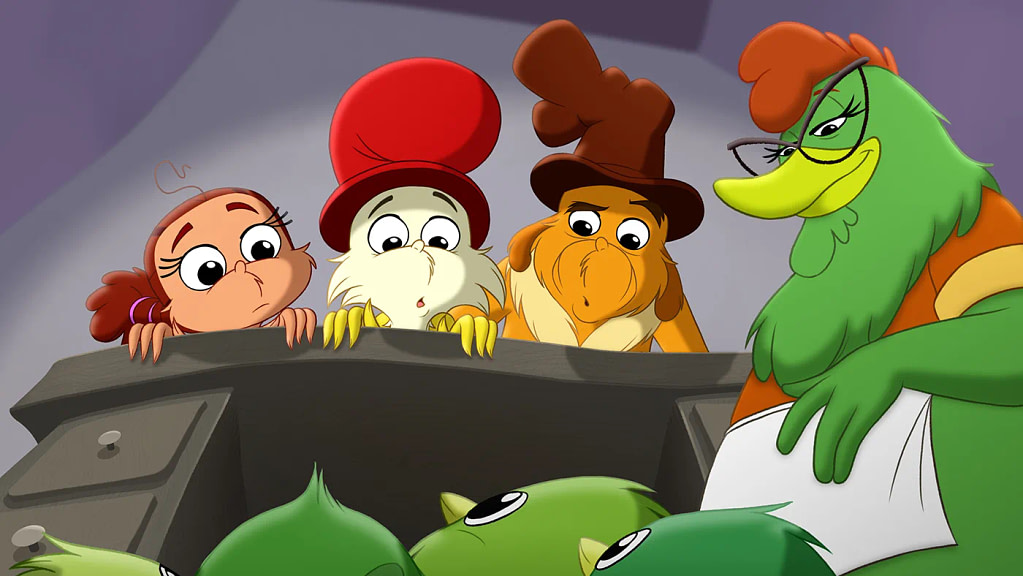 Jared Stern has so much to do now, with shows and movies to make. But 10 years spent on Green Eggs and Ham still takes the cake. Photo Courtesy of Netflix.

There once was a boy who was named Jared Stern. He was too young to read, but he wanted to learn. And what was the first book the boy ever read?  “It was Green Eggs and Ham,” Jared Stern said. The beloved old book, a Dr. Seuss story, held a place in Jared’s heart, and memories of glory. When Jared grew up, he wrote stories and scripts. Movies, cartoons and comedy quips. Then one day out in Hollywood, among the glitz and the glam, some people asked Jared to write a new Green Eggs and Ham.

Jared’s friends were producers, who worked with big stars. There was Jeff Kleeman, David Dobkin and a guy named Mike Karz. The plan was to turn the book into a series. But how? Jared thought, his head filled with queries. Jared knew Dr. Suess gave them great source material, but could a 50-word story be told as a serial?

“A modern-day bromance between two pals—Guy and Sam—was the perfect, fresh take on Green Eggs and Ham.”

“I had a strong memory from my childhood. It was my favorite book,” Jared said, and he gave it a look. As he flipped through the pages he long ago read, “The wheels started turning,” Jared Stern said. He was filled with ideas, concepts and feels. “It’s a mismatched buddy road trip,” Jared said. “It’s Planes, Trains and Automobiles!” A modern-day bromance between two pals—Guy and Sam—was the perfect, fresh take on Green Eggs and Ham.

Jared’s clever new angle had loads of potential, and a story was mapped out in order sequential. Creative minds went to work, like builders with bricks, and the result was a hit show that streamed on Netflix! The voice cast was perfect as perfect could be, with Michael Douglas, Diane Keaton and Keegan-Michael Key. There’s only one thing to do with a show this deserving—make Green Eggs and Ham: The Second Serving!  But wait; they needed a plot. Where would that come from? Well, Suess wrote more books, so Jared Stern read some. He studied and studied, whatever it took, and at last he found his answer in The Butter Battle Book.

“I loved it,”  Jared said, his eyes filled with a spark. “And I hated it, too, because it’s pretty dark.” Among the last books that Dr. Suess wrote was one of mutual destruction, a brilliant, sad story—in retrospect a clear Cold War allegory. The cautionary tale of the Yooks and the Zooks and their paranoid mindset mirrored modern-day kooks. The story had resonance, why, it had it all, from the mindset of “othering” to building a wall. Jared knew that the book would make a great second season, a story with equal parts rhyme, meaning and reason. The Geisel estate, who owns Dr. Suess’ writings, said Jared could use it, which was very exciting. The writing team molded it to fit their own vision. What else could they add? Then suddenly, they made a decision. How to lighten a story of war and the threat of the bomb? Why, with a touching reunion between Sam and his mom!

“The plan was to turn the book into a series. But how? Jared thought, his head filled with queries. Jared knew Dr. Suess gave them great source material, but could a 50-word story be told as a serial?”

Patricia Clarkson joined the voice cast as superspy Pam-I-Am, adding conflict and mystery, and action—hot damn! Greens Eggs and Ham, of which we all are so fond, found a new source of laughs poking fun at James Bond. Pam-I-Am comes with gadgets and sleek vessels to ride on, and her own comic foil, who is voiced by Rob Brydon. Phillip Trousers by name is a male superspy, who is quite debonair but not a very smart guy. Jared wrote this fun character with Brydon in mind, and when the actor said yes, the character shined.

Season two hit Netflix on Friday, April 8, and it isn’t just good, it’s genuinely great! Jared Stern and his colleagues have done it again—could season two mean another Daytime Emmy Award win? The future looks bright, as good as gets, and Jared’s next project is DC League of Super Pets. Jared co-wrote and directed the comic book feature, which gives super-powers to cats, dogs, and other cute creatures. But what about Suess and Green Eggs and Ham? Will we see more stories of Guy and his pal, Sam-I-Am?

“It’s always possible,” Jared said, glad to know that people care. “We’ll see how season two works out, and then we’ll go from there.” Jared Stern has so much to do now, with shows and movies to make. But 10 years spent on Green Eggs and Ham still takes the cake. Jared’s memories of childhood made it a labor of love, and he and the project fit like a glove. “When I told my Grandmother I was working on this,” Stern recalls, in a moment sublime, “Her response was ‘that was your favorite book when you were little. You used to read it to me all the time!”

Green Eggs and Ham: The Second Serving is on Netflix now, a great place for preserving the magical tale and the lessons we learn, from folks like Dr. Suess, and also Jared Stern.