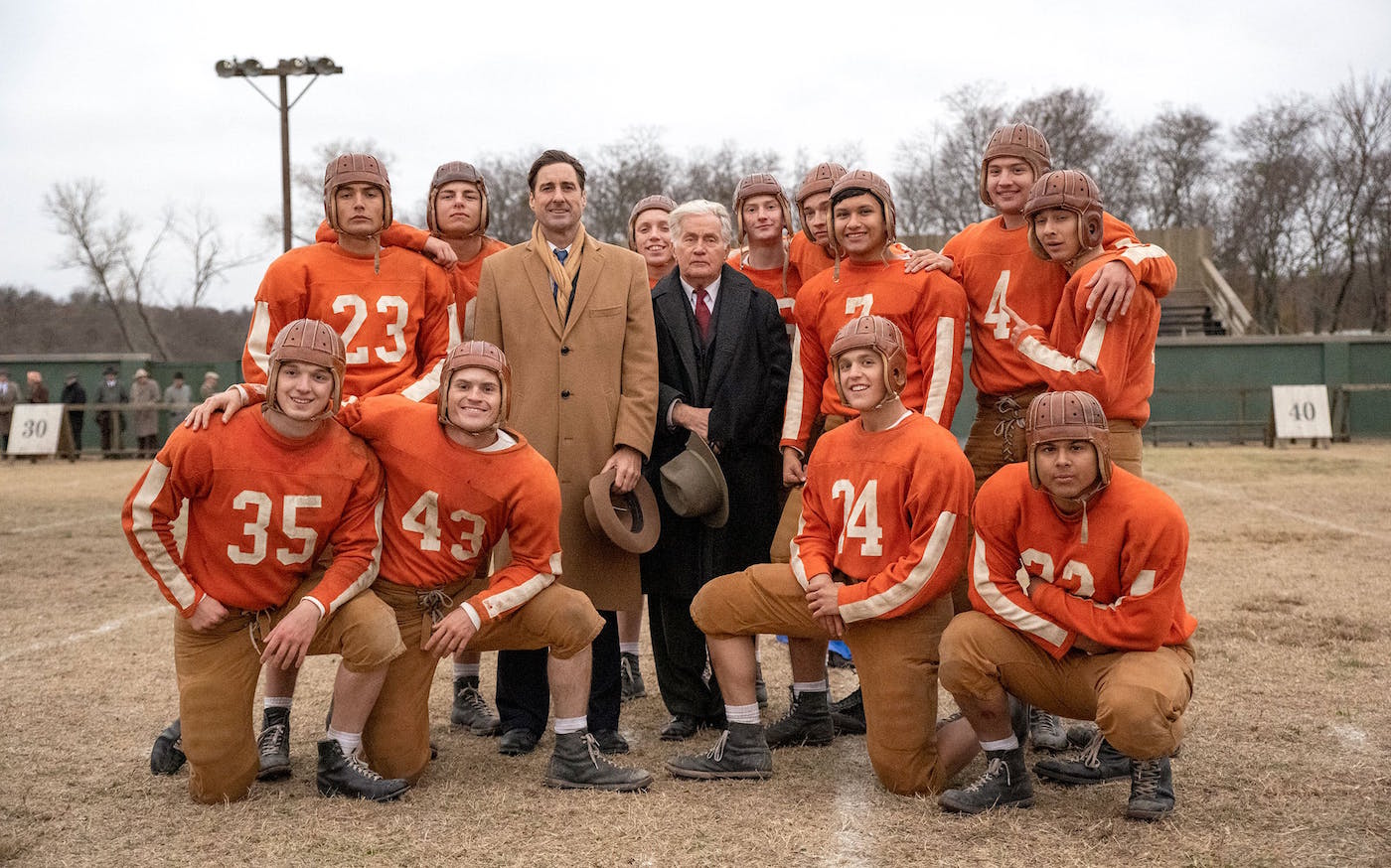 The formula for a sports movie is hard to get completely wrong. 12 Mighty Orphans, which is based on a true story, seems almost foolproof. But it fumbles an awful lot on its way to the goalpost.

During the Great Depression, Rusty Russell (Luke Wilson, Old School, The Royal Tenenbaums) a legendary high school football coach. He gives up a privileged position at a top school in order to coach at a Masonic Home for orphans in Fort Worth, Texas. The orphanage is run by Frank Wynn (Wayne Knight, Seinfeld, Jurassic Park), a corrupt and mean-spirited man who plays like Wackford Squeers from Nicholas Nickelby crossed with the villain in an old Rankin-Bass Christmas special.

The only support Rusty receives is from Doc Hall (Martin Sheen, The Departed), the facility’s resident aging alcoholic physician, who takes such an interest in the team whom he decides to help coach—he even narrates the movie. The Mighty Mites, as they are known, go from playing without shoes, or even a football, to playing for the Texas state championships. Over the course of their winning season, Rusty Russell develops plays and strategies that redefine the game, and these underdogs and their resilient spirit become an inspiration to their city, state and an entire nation in need of a rebound.

Director Ty Roberts (Iron Orchard) has an obvious passion for the material, and that certainly helps, but he makes a number of bad choices, including using a couple of very obvious stock-footage shots from the period and trying to pass them off as establishing shots. He also lets the first half of the film play at the speed of an asthmatic ant carrying heavy groceries. And the more antagonistic characters, including Knight’s headmaster and a rival football coach played by Lance Garrison (Shooter), are portrayed as such one-dimensional snarling beasts that it becomes insulting to the intelligence of the audience.

However, it must be said that Roberts stages the football sequences well, to the point where—as someone who has never cared about or understood football—I left this movie actually thinking “OK, I think I get this now.” Overall, his direction becomes more confident and capable as the movies plays out, and I found myself becoming engaged, even though the screenplay, by Roberts, Garrison and Kevin Meyer (A Smile Like Yours) is cheesy, predictable and, at times, just plain awkward. It doesn’t help that while the nature of the story makes it inherently male-centered, the total lack of effort to give the few women in the story a discernible personality or purpose beyond reference to sewing, baking and adoring their men is off-putting, to say the least.

Luke Wilson spends the first third as an almost deliberately dull presence, as if we are seeing him from the perspective of the boys who are not sure of him. But when we get to know the character, what drives him, and why this is all so personal to him … He’s still pretty dull. It’s not a terrible performance, but never for a moment did I buy him as having the ability to inspire anyone.

Sheen has a fair amount of folksy charm, even if his character is a walking cliché, and Jake Austin Walker, who is mostly known for one-shot appearances on a variety of television series, is really quite terrific as Hardy Brown, the star player of the Mites. It’s a performance the deserves to be seen. In general, the young actors playing the Mighty Mites give the strongest performances, and I did grow to care about them as individuals and as a team. The great Robert Duvall—who, of course, appeared with Sheen in Apocalypse Now—is being advertised as a cast member, but it’s a one-scene cameo that serves no purpose.

12 Mighty Orphans is a lackluster film, but it does have its moments, and it puts in a lot of effort. I can’t bring myself to go too hard on it, but it comes down to this: If you look at the advertising and think, “I really want to see that,” you’re probably going to feel it was worth your time, even if it’s no Remember the Titans. But if you are feeling skeptical or ambivalent, I would feel comfortable placing a sizable bet against it winning you over. –Patrick Gibbs