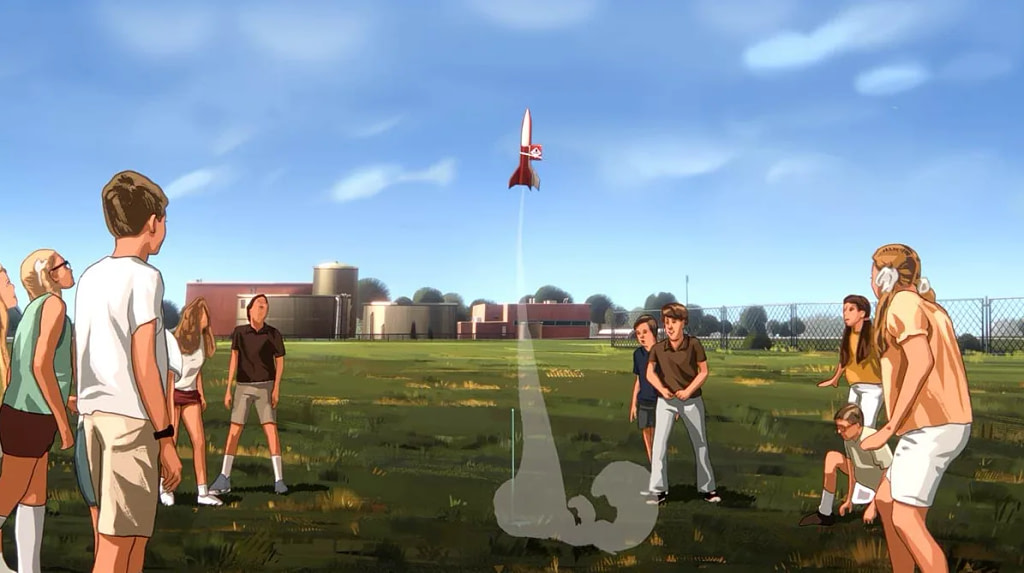 Apollo 10 ½: A Space Age Childhood is a snapshot that revels in the nostalgia of anyone who dreamed of flying into space alongside the original astronauts. Photo Courtesy of Minnow Mountain and Submarine.

The semi-autobiographical “nostalgia isn’t what it used to be” movie is really having a moment: Kenneth Branagh did it, Steven Spielberg is doing it later this year, and sandwiched in between them is Richard Linklater’s new animated feature, Apollo 10 ½: A Space Age Childhood.

It’s the summer of 1969 in Houston, Texas. A young boy named Stan (Milo Coy) is obsessed with the space program and is hardly alone. Stan’s father works for NASA in shipping and receiving, though the boy tells the other students at Ed White Middle School that his dad’s job is something far more exciting. As the historic mission to land on the moon approaches, Stan imagines himself being recruited by two NASA officials (Zachary Levi and Glen Powell), who explain that the lunar module was accidentally built too small for a full-sized adult and they need him to fly a secret test mission before the real thing.

Apollo 10 ½: A Space Age Childhood may alienate some viewers with its misleading trailers that overemphasize Stan’s daydream scenario. In fact the film chronicles an average kid in the late ’60s who comes from an average, middle-class family. Linklater used the whimsical fantasy scenario to pull people in with the illusion of a plot, but where we land is a mash-up of the director’s previous efforts, ranging from Dazed and Confused to Waking Life to Boyhood, with a heavy dose of Woody Allen‘s Radio Days. The rotoscope animation technique, similar to Waking Life, allows for some creative visuals, even outside of the daydream, but the Texas setting makes it hard not to think of King of the Hill.

There’s as much time spent loving looking back and the pop culture of the era, from 2001: A Space Odyssey to The Monkees, as there is on the space race. Linklater’s blastoff down memory lane is heartfelt and sweet, and those who don’t mind his leisurely sense of pacing or lack of any dramatic conflict will find a lot to love about the film. I found it to be overlong but satisfying. Boyhood ranks second only to Ari Aster’s Hereditary among movies that have lead people to become bizarrely hostile when they find out I’m a film critic, and in anticipation of dodging insults and very nearly having to dodge punches, I feel compelled to be very clear that if you’re going into Apollo 10 ½: A Space Age Childhood expecting Apollo 13 meets Mars Needs Moms and are excited by that prospect, that’s not the movie you’ll get.

It did bother me, however, that Apollo 10 ½ fumbles in a big way by acknowledging but backhandedly minimizing, the disillusionment felt by many Black Americans, who resented the massive amount of money being spent on space flight while the rampant poverty and oppression on Earth was all but completely ignored. We see a quick news snippet on the subject, only to have Stan’s father let out a harrumph as we go back watching yet another chronicle of the space race told from a middle-class, white perspective. While Linklater is hardly the right filmmaker to direct a movie that delves deeper into this particular cultural schism, part of me doesn’t want any more films about the awe and wonder of the era made by white guys until we see even one that really portrays the other point of view with more than just an outsider’s shrug.

Wholly, Apollo 10 ½: A Space Age Childhood is an enjoyable snapshot that does very well at reveling in the nostalgia of anyone who ever dreamed of flying into space alongside the original astronauts, went to a drive-in movie or collected vinyl LPs. As a piece of storytelling and human drama, it’s a bit lacking, and I suspect that many Netflix viewers won’t even finish watching it. I’m fine with that, but if any of them want somebody to lash out with their feelings, I for one will be putting on my headphones and listening to Daydream Believer as I close my eyes and take a stroll through the sea of tranquility while they foam at the mouth.  –Patrick Gibbs