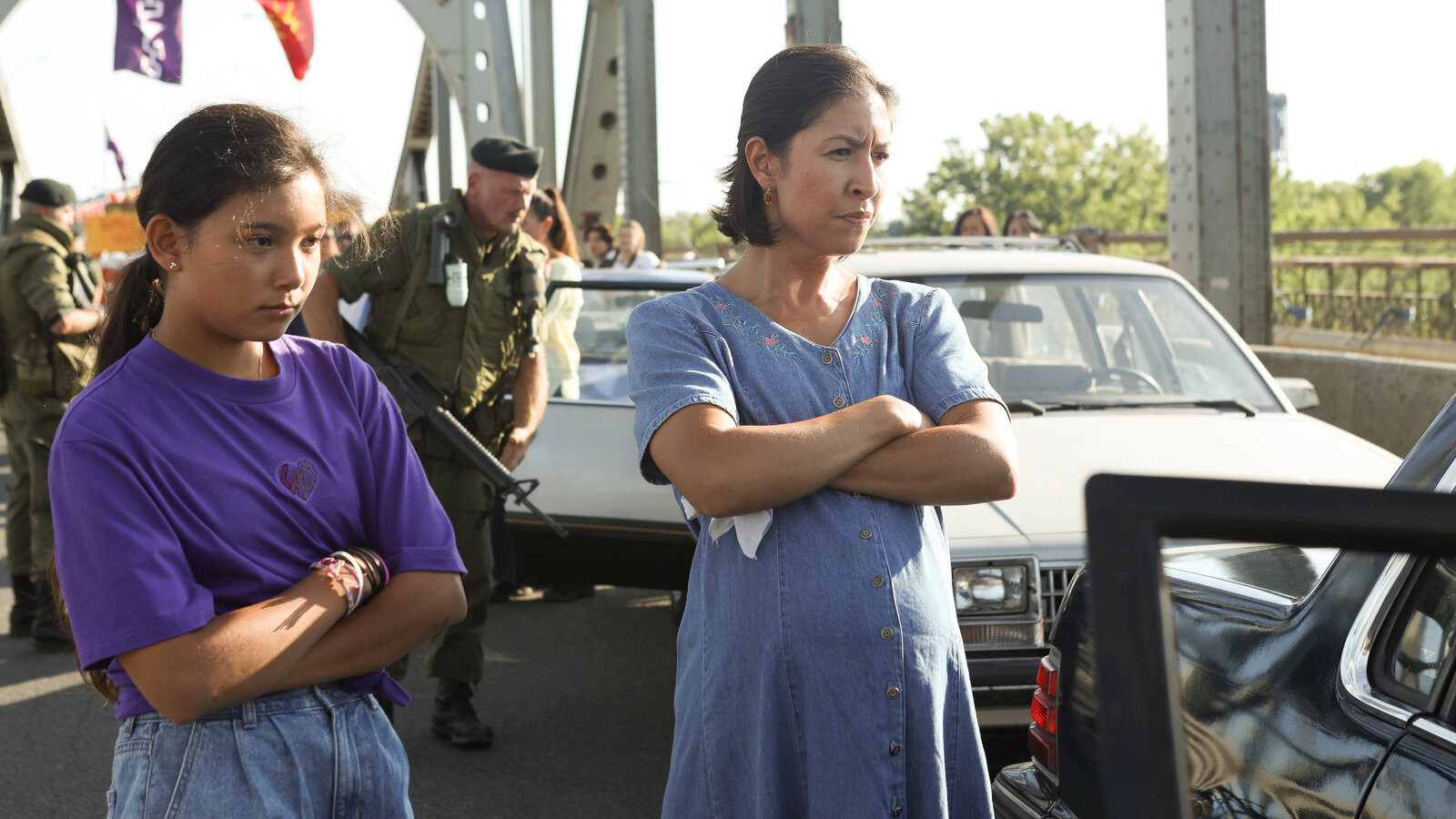 The coming-of-age genre is a cinematic staple, but rarely is it told with this level of intensity. The trials of the transition to adulthood, the loss of innocence to the spinning wheels of change—these are deeply personal movements. For a storyteller to share these unique experiences can require terrifying vulnerability. BEANS, directed by Tracey Deer, seems to come from this vulnerable space with the story crafting a beautifully intimate portrait of Deer’s own experiences as a child. In her hands the coming-of-age story is recontextualized and expanded, capturing the larger story of the 1990 Indigenous uprising known as the Oka Crisis through the intimate gaze of a budding young woman.

Our main character is named Tekehentahkhwa (Kiawentiio), but she shortens it to Beans. Everyone else does, too. Wrestling with the everyday struggles of fitting in and growing up, the breakout of the Oka Crisis escalates her situation to a fever pitch. Based on real life events, Beans’ community must rally together when the town of Oka, Quebec tries to appropriate the Mohawk’s land and turn it into a golf course. Barricades are built, standoffs ensue and soon the small Mohawk nation is cut off from the rest of the world. With tensions rising, both sides must fight to keep the peace while trying to hold onto their rights. The ripples of Beans’ actions are now felt throughout her small community, her margin for error that much tighter. Beans is forced to grow up quickly and decide what kind of warrior she wants to become, meanwhile her people fight off police, armies and mobs to protect their sacred land from the indifference of golf course–obsessed capitalists.

Not just a story of growing up, Deer gives us a complex and violent political drama while framing it within the perspective of a young woman’s fragile life. Small moments of normality like experimenting with makeup, kissing boys and learning fun new swears are all interwoven within this larger picture of tension and hate. These everyday moments are that much more urgent and terrifying when set to a backdrop of barricades and tear gas.

Forced to face harsh realities, Beans searches for strength among the women around her, mimicking their actions and trying on different personalities as if they were hairstyles. Beans struggles between the calm strength that her mother (Rainbow Dickerson) radiates, and the tough facade that her new best friend April (Paulina Jewel Alexis) evokes. Her hopeful future and healthy development somehow seem trivial in the face of the struggles of her community and the contempt from those outside.

As the crisis evolves, she grows angry and spiteful, a mirror to the world around her. This inner-turmoil is brought to life by Kiawentiio’s stunning performance. She is charming and engaging—everything a leading lady needs to be—while also managing to capture all the multi-dimensional emotions one experiences as a teen. Violah Beauvais also does an impressive job as Beans’ younger sister Ruby. The trifecta of acting talent is topped off with Dickerson’s performance, which oozes strength and wisdom in every scene, leading the young actresses into battle whenever they share the screen. Combine the three of them with the authentic dialogue from co-writers, Deer and Meredith Vuchnich, and you get an honest portrayal of family.

BEANS was thought provoking and heartbreakingly sweet. The story was heroically vulnerable and radically tense, everything a good coming-of-age story should be. –Morgan Keller