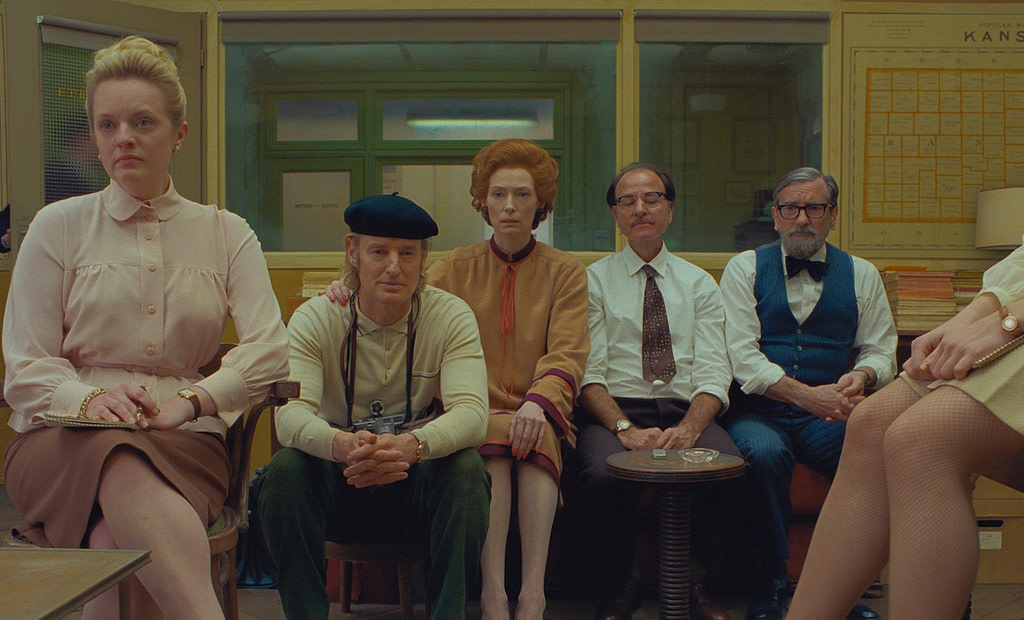 The French Dispatch is a satellite publication of the Liberty, Kansas, Evening Sun based in the fictional city of Ennui-sur-Blasé in France. The journal is run by an eccentric editor, Arthur Howitzer, Jr. (Bill Murray), whose oft spoken journalistic credo is, “Try to make it sound like you wrote it that way on purpose.” As the film opens, Howitzer has just passed on to that great big office in the sky, and he long ago made the declaration that The French Dispatch will cease all operations upon his passing. The film then follows an anthology of stories narrated by writers for the Dispatch: “The Concrete Masterpiece” by J.K.L Berensen (Tilda Swinton, Michael Clayton), “Revisions to a Manifesto” by Lucinda Krementz (Frances McDormand, Nomadland) and “The Private Dining Room of the Police Commissioner” by Roebuck Wright (Jeffrey Wright, Westworld).

The French Dispatch shifts through multiple aspect ratios, goes from color to black-and-white and back and features an extended animated sequence—it may be Anderson at his most self-indulgent. It works because the more pretentious the auteur gets, the more fun he has with mercilessly yet lovingly mocking pretentious auteurs as a whole. It’s such a wholly remarkable niche that the more Anderson starts to lose me, the more he has me hooked.

Benicio Del Toro (Traffic, Sicario), and Léa Seydoux, (No Time to Die) are bewitching in the first segment about an imprisoned killer who paints great works of avant garde-art with a female prison guard serving as his muse. That segment could have been an entire movie of its own. Less successful is the middle story about a student rebellion. Through Timothée Chalamet (Dune) and McDormand shine, the story is unfocused and it doesn’t really go anywhere very interesting The final segment thrives thanks to the performance of Wright as the pompous but deeply lonely Roebuck Wright—rather than choosing between caricature and character, he makes Roebuck work as both, and he deserves long overdue Oscar attention. The highlight of the film has to be the 2D, minimalist animated chase scene in that sequence, which may be one of the most bizarrely amusing things I’ve ever experienced in my life.

The French Dispatch benefited from the thought that this was probably the closest thing we’ll ever see to a SLUG Magazine movie, but on the whole I had a great time. It’s jumbled and it often struggles to find a through line, as is so often the case with anthology films, and it’s certainly not Anderson’s best work. But it offers plenty of wonderful elements and a unique artistic voice that is likely to please most fans. While it may be for current subscribers only, The French Dispatch still delivers. –Patrick Gibbs