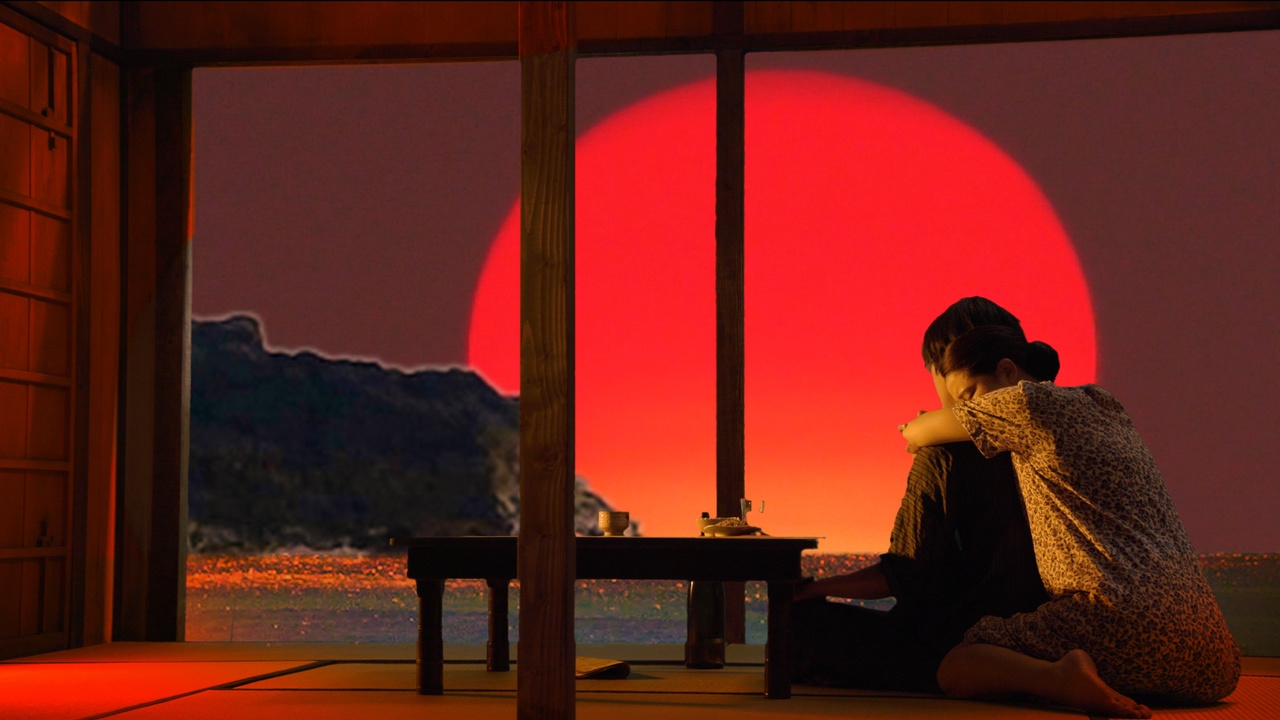 Nobuhiko Obayashi’s final film is his magnum opus, a triumphant statement about the power of cinema’s escapism in the face of a brutal reality. No one can say that Labyrinth of Cinema doesn’t deliver exactly what the title promises: It is a flashy and unique experience that balances good-natured fun with terrifyingly visceral themes of human brutality and the cost of war.

A plot summary for this film would be doing the experience an injustice as it should really be enjoyed moment by moment, with each scene proceeding masterfully into the next. Plus, I’m not sure I even could … Explaining the solution to a maze is no simple task—better to experience the twists and turns firsthand and try to solve it yourself.

But fret not, our guide Fanta G (played by Yukihiro Takahashi), provides both the sword and the thread to carry us through. As he lands his spaceship and visits the local theater to catch its final show before its closure, both audiences are swept up in the tale. Shortly, reality and fiction fuse. Our main protagonists—Hosuke (Takahito Hosoyamada), Mario (Takuro Atsuki) and Shigeru (Yoshihiko Hosoda)—all get swept up in the magic of cinema and the horrors of war in an attempt to save their damsel in distress, Noriko (Rei Yoshida) from her ever-looming doom.

The structure of this three-hour theme park is guided by tropes and cliches from multiple war-film genres. Obayashi gives each of our leading men a chance to be the hero, having them star as samurais, soldiers and actors—in every case, trying to prevent disaster. These characters are film buffs themselves, screaming desperately for Romeo to realize his folly. But it’s too late: These things have happened. The only time the script can be re-written is now.

I’m barely scratching the surface of what this film is able to achieve. Chronicling the endless push and pull of the human experience, the striking visual imagery and erratic rhythm at times feel like an Adult Swim fever dream with surprising heart. Through repetition, much is conveyed in terms of symbolism and action, culminating in the film’s argument on behalf of film itself: As we dream the movies, the movies dream us. Cinematic reality is more authentic and more immersive than the banal, everyday world would have us believe; sometimes the melodramatic line delivery you find in a movie is true to the genuine human expression of our “real” world. The painstakingly manufactured lies of history and cinema can reflect a greater human truth when projected within the silver-screened chapel of your local theater.

Obayashi uses every medium at his disposal to share his anti-war sentiments with his audience, capturing the terrifying trauma of generations of wartime while also weaving in real-life events and how they correspond to Japan’s cinematic history. Even the language of film itself is eschewed. The fourth wall is broken, and continuity is thrown to the wayside; it was holding us back. Make no mistake though—the film is so much more than its dizzying aesthetic, cutting deep with sometimes sappy but always earnest dialogue and intercut with poetry and song.

Taking on this film is a daring, three-hour journey—definitely not one for the faint of heart—but I highly recommend this film for any and all movie lovers. I am walking out of this picture a changed woman with an ignited gratitude for the escape that film can provide in a brutal world, and perhaps its potential to change us. –Morgan Keller