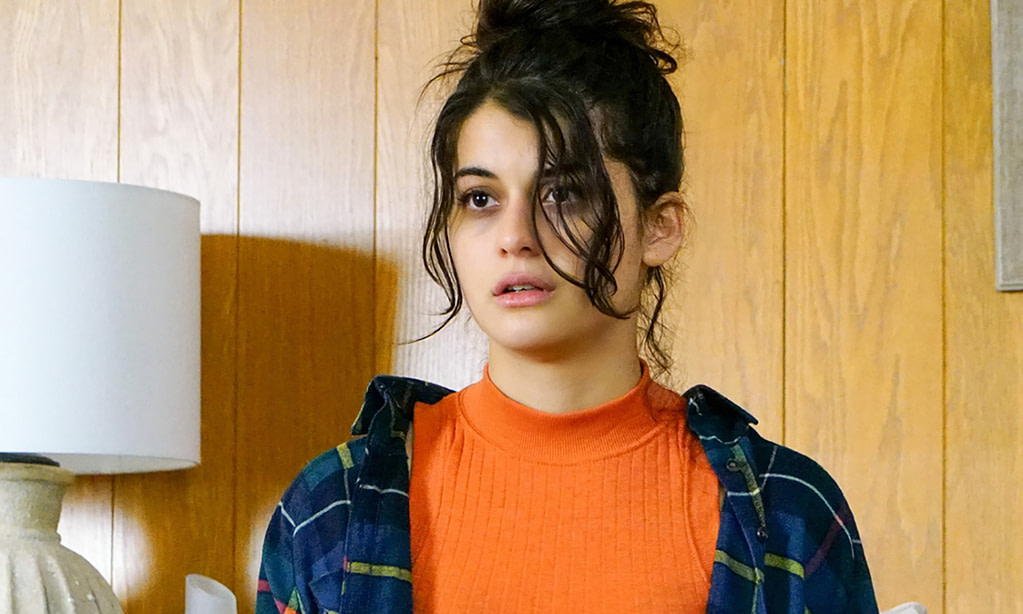 We’re one month into 2020 II, er, 2022—not that anyone cares. I’m over the linear measurement of time, too. The only way I know that a new month is starting is when I receive an email from SLUG asking “Where’s the Content Shifter column? We checked the analytics, and it gets at least a dozen views quarterly—WE CAN’T LOSE THOSE CLICKS!!!”

Here are 11 click-worthy series that premiered over the past couple of months that you might have missed despite being perpetually housebound. What are you doing, still making sourdough bread? 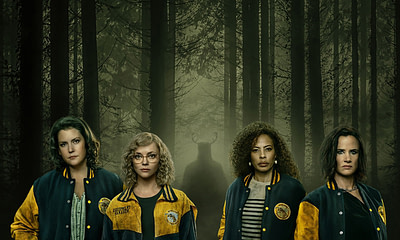 Juliette Lewis and Christina Ricci star in this dual-timeline hyper-drama about a ’90s high school girls’ soccer team that survives a plane crash deep in the Canadian wilderness and the trauma that continues 25 years later. Following the crash, the Yellowjackets team devolved from a tight-knit group into violent, cannibalistic(!) factions. Needless to say, relations between the women present-day are strained and weird, and Lewis and Ricci are more than up to the challenge of playing strained and weird here. The teen cast is also frighteningly fantastic, as is the ’90s AF soundtrack. 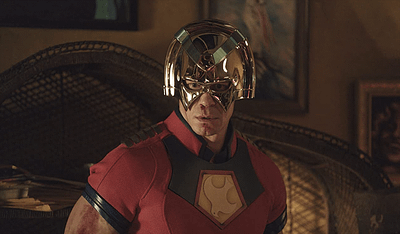 John Cena reprises his The Suicide Squad role as Peacemaker, the most erroneously named “hero” in the DC Universe—Shitshowmaker would be more accurate. Writer/director James Gunn is also back, penning all eight episodes of this action-comedy that delves into the origin story of Peacemaker, the man who “loves peace, no matter how many men, women, and children I need to kill to get it.” As with Yellowjackets, the ultra-profane Peacemaker’s music is practically a costar, cranking out hair-metal deep cuts like Cobra Kai on a coke bender. 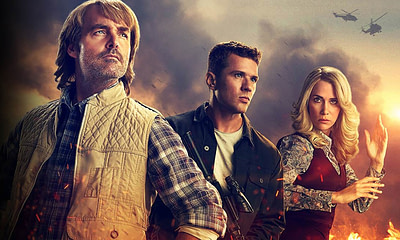 Will Forte launched his gloriously stupid MacGyver knockoff as a Saturday Night Live bit in the early 2000s, culminating with the 2010 cult classic movie MacGruber (which is also available on Peacock, BTW). MacGruber the series picks up a decade later, with MacGruber (Forte) being released from prison to help the government take down supervillain Enos McQeeth (Billy Zane). Sidekicks Vicki (Kristen Wiig) and Dixon (Ryan Phillipe) are also back, and Forte takes this iteration of MacGruber into batshit free-jazz territory like it’s the last ride (which it probably is). 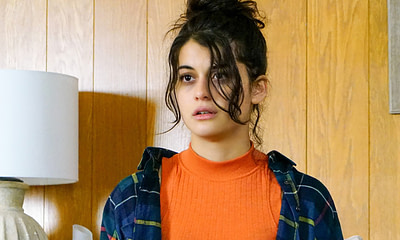 And the show title of the month award goes to … Single Drunk Female! This dark dramedy stars Sophia Black-D’Elia (Your Honor, The Mick) as 20-something alcoholic Samantha who’s forced to sober up after drunkenly assaulting her boss (to be fair, he was asking for it—what’s wrong with a little day drinking?). Adding insult to injury, Samantha also has to move back in with her mother (Ally Sheedy, adding some unexpected comic relief). Single Drunk Female occasionally veers into the sad-core lane, but you can’t help but root for Samantha (sober or wasted). 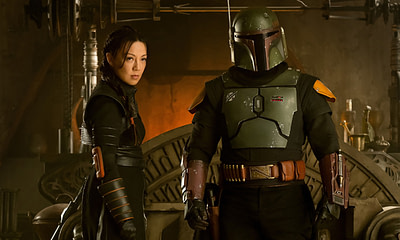 The Book of Boba Fett (Disney+)

Have you seen the meme stating that “Boba Fett’s full name is Robert Fettuccini”? It may or may not be true, but it’s fucking funny. Anyway: The Book of Boba Fett is Disney+’s latest Star Wars adventure series, starring Temuera Morrison as fan-favorite Fett and Ming-Na Wen as his assassin cohort Fennec Shand. The series follows the pair’s return to Tatooine and their plan to take over the late Jabba the Hutt’s criminal enterprise and, like The Mandalorian, the side-players are often more compelling than the titular star. Maybe step it up, Mr. Fettuccini. 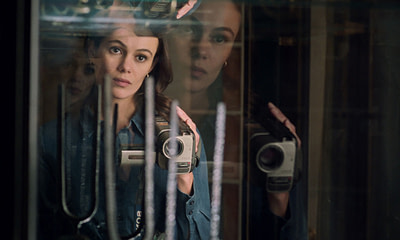 “Based on the hit podcast” is becoming more of a thing all the time—Netflix series Archive 81 is just the latest. The story: Dan Turner (Mamoudou Athie) is hired to restore and archive the videotapes of ’90s documentary filmmaker Melody Pendras (Dina Shihabi), whose final work was an investigation of a demonic cult. In true found-footage form, the tapes are full of bizarre, terrifying imagery, and soon Dan becomes obsessed with the mystery and Melody. Yes, psychological thriller Archive 81 is also a time-spanning romance that can’t possibly end well. 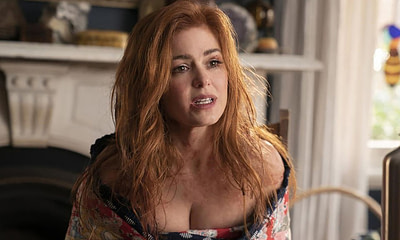 No, it’s not a documentary about Brooklyn band TV on the Radio, but trivia props for remembering their lone hit. This Wolf Like Me stars Josh Gad as widowed father Gary, whose sad-dad life is brightened when he meets Mary (Isla Fisher), a cheery woman with a dark, closely-held secret. Thanks to the show’s title, the implication here is that Mary’s a werewolf (spoiler: she totally is—she ate her ex-husband, too), making Wolf Like Me a supernatural rom-com where “baggage” takes on a whole new meaning. A light, fluffy and short watch. 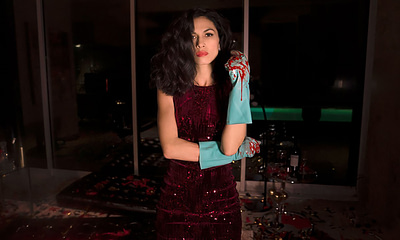 Cambodian doctor Thony De La Rosa (Elodie Yung, Netflix’s Daredevil) came to the U.S. to find medical attention for her ill son, only to be failed by the system like a real American. Then, when she accidentally witnesses a mob hit, she offers to clean the crime scene to stay alive—instant new side hustle. The Cleaning Lady, an adaptation of an Argentinian series, is a Las Vegas crime drama that also tackles immigration issues and U.S. medical system shortcomings while flirting with telenovela diversions. It’s a bit of a mess, but still better than CSI: Vegas. 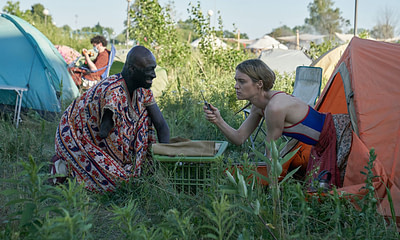 This time-tripping drama about an international flu pandemic began production months prior to the real thing sweeping the planet—naturally, there’s some “too soon?” trepidation about Station Eleven (see also: South Park: Post Covid). But Station Eleven’s pandemic is far more deadly and uncontainable than what we’ve experienced in reality over the past two years, so… relax and enjoy? Station Eleven’s post-apocalyptic ensemble (including Mackenzie Davis, Himesh Patel and Lori Petty) are basically performing a stage play for pandemic shut-ins. 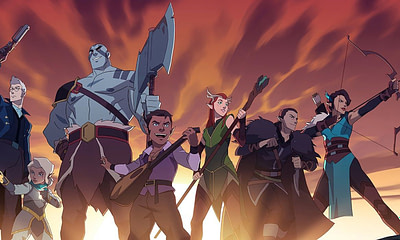 You don’t necessarily need to know or understand the Critical Role RPG (role-playing game) campaign origins of The Legend of Vox Machina to get into this new animated series—but it certainly helps. Vox Machina, a ragtag gang of good-looking misfits, fall into a quest to save the Exandria realm from sinister dark forces in order to pay off their exorbitant bar tab (The Legend isn’t all serious Dungeons & Dragons business). Like Prime Video’s Invincible, The Legend of Vox Machina is a way-adult cartoon that’s not for kiddies. Or maybe it is, I don’t know your kids. 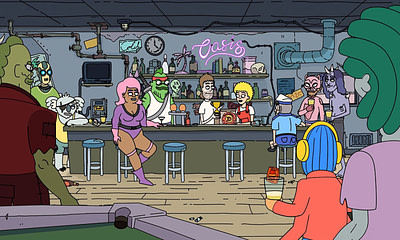 In other fantasy ‘toons for adults news, Doomlands has completed its journey from college animation project to a Quibi-sourced series on The Roku Channel, that lonely purple app you keep scrolling by. In Doomlands, Danny Doom (voiced by Mark Little) and Lhandi (Kayla Lorette) travel the post-apocalyptic wasteland in their mobile bar, The Oasis, dispensing beer to the mutated masses. Doomlands borrows lightly from Rick & Morty, leaving out the crushing existential dread—too bad Adult Swim’s midnight stoners can’t find The Roku Channel.