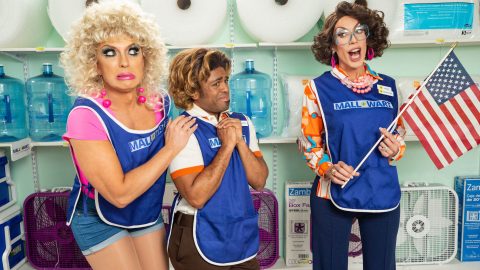 Ruthlessly campy and insurmountably queer, Shit & Champagne is the type of film begging to be billed at midnight screenings for a nocturnal crowd of weirdos, creeps and freaks. This indulgent homage to the exploitation films of the ’70s overflows with character, thanks in no small part to the vibrance of Writer, Director, Producer and star D’Arcy Drollinger, who single-handedly ties together this glamorous shitshow.

The film follows exotic dancer Champagne (Drollinger) who, after losing her fiancé to a group of knucklehead thugs, ventures on a quest to find out who was behind his murder. Enlisting the help of Detective Jack Hammer (Seton Brown), the two uncover a much larger plot by the evil mastermind Dixie Stampede (Matthew Martin), who’s planning a global takeover of prostitution and pant-shitting through her corporate empire, Mall-Wart. Between kung-fu dance battles, toilet-plunger-forward action sequences, overplayed gags and an endless stream of innuendos, Shit & Champagne leaves no avenue for you not to be entertained.

The proper environment for this cinematic experience is a packed theatre with booze and other intoxicating accoutrements. Given a couple years of viewings, Shit & Champagne could easily garner a cult following as it’s full of characters who make for easily-thrown-together costumes, antics ripe for drinking games and quotables such as Champagne’s catchphrase, “So I’ve been married a couple of times! It’s none of your fucking business!”

As far as recreating the aesthetics of its ’70s inspirations, the film does little beyond sound effects, costuming and the overuse of zooming to capture that feeling of films from Pam Grier, John Waters and others. This makes it feel largely contemporary, especially with its small nods to current events and “woke culture”—which is not a dealbreaker, but it does make the film feel stuck between two artistic visions at best and lazy at worst. The saving grace of the film is just how much fun the cast is clearly having. Who wouldn’t want to dress up in a ’70s getup, put on a funny voice and fight off baddies in drag? In that way, Shit & Champagne feels very much like a piece of community theatre with a cast full of your friends.

Shit & Champagne is not good, nor does it want to be, nor does it care what you think. It’s the type of film that, come hell or high water, will keep on pushing through until you either laugh or leave. –Aidan Croft

Editor’s Note: Correction for misnaming Detective Jack Hammer as Detective Tony Hammer and crediting the role to Adam Roy instead of Seton Brown.