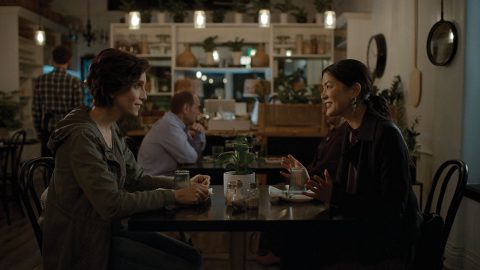 Damn These Heels! Film Review: See You Then

See You Then
Director: Mari Walker

See You Then unravels through a relationship post mortem, following romantic exes Kris (Pooya Mohseni) and Naomi (Lynn Chen) as they reconnect over one long night of drinks 13 years after Kris left Naomi without a word. It’s bottled setting and measured, dialogue-driven style give the film a casual smallness, and See You Then works best when it leans into this interiority. Mohseni and Chen play through the initial awkwardness and hesitant warming back toward friendship with unease and relatability, and all of the film’s best moments occur when they’re locked in a true tête-à-tête. Whether they’re giggling about obnoxious old classmates, reminiscing about college nightlife or regaling each other with tales from their wayward life paths, the duo pinpoint that fluid post-breakup precipice of resentment and love.

The film stumbles a bit when it forgoes this conversational intimacy and reaches for profundity. Rather than circle around the inherent interest of these two individuals’ diverging lives, writer-director Mari Walker uses Kris and Naomi’s internal conflicts as a springboard for Big Conversations about gender roles/identity, dating life, parenting and more. Within the film’s slim (~75 minute) runtime, these flashes of heated, important dialogue feel at odds with the unhurriedness surrounding them. There’s not much breathing room between jokey conversations and extended segments of Kris lambasting Naomi for not understanding the trans experience in fiery, over-enunciated monologues.

That gravity with which Mohseni plays Kris marks some of the film’s weaker moments. Chen approaches her role with hesitance, diving headfirst into the film’s grim, quiet mise-en-scene. Even when she’s erupting at Kris and finally dismantling the picture-perfect vision of their relationship, Chen’s delivery—full of voice quivers, pleading sighs and pregnant pauses—feels of that moment. In contrast, Kris often feels overwritten and over-prepared, with her sometimes languorous speeches full of terminally online snatches of dialogue and extrapolating blanket statements about life as a trans person sticking out like a Laurence Olivier sermon in a home movie. The film’s inconclusive conclusion subverts this righteous sense of purpose and reaches for some type of deflated reckoning, with both characters’ flaws being laid out in messy, bloody detail. The lack of (inter)personal resolve lands like a dull punch, reorienting the story back to the gilded core of each character’s extreme subjectivity.

In painting a picture of two deeply flawed individuals trying to heal, forgive and make themselves heard, See You Then paints hyperreal portraits of the mistrusts and disappointments littering these real-world messes. In the moments where it breaks away from its singularity and reaches out toward peanut-gallery discourse, the film loses its defining focus: the ever-varying greyness of working through a breakup and becoming your own person. –Audrey Lockie