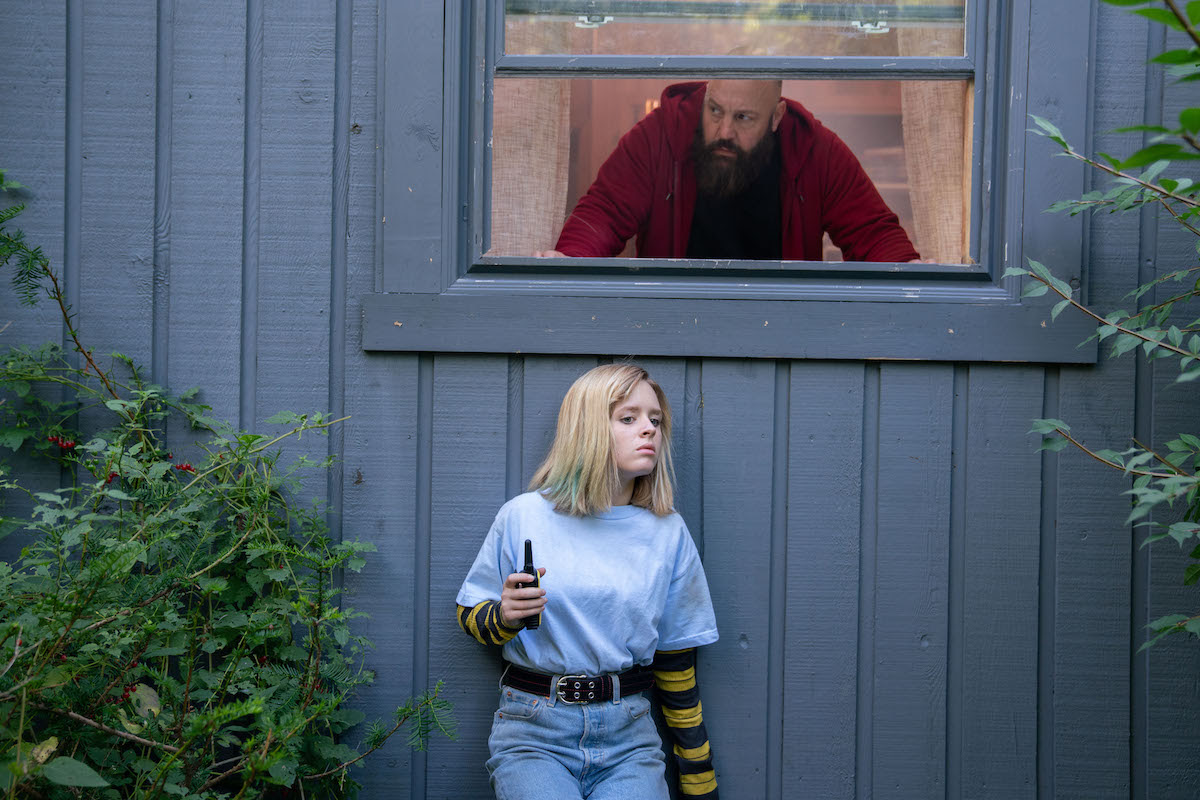 In the 1988 action classic Die Hard, last minute choice Bruce Willis brought so much presence and commitment to his performance that it catapulted him to a level of superstardom that allows him to now make obscene amounts of money by appearing in approximately eighty straight-to-Video On Demand movies per year, at an average of two working days on set per film. Sometimes, if it’s a project he feels especially passionate about, he will learn both the first and last name of the character. Willis’ career has come full circle in being the perfect personification of the merits of casting an up-and-coming actor over a boring star. Enter talented young actress Lulu Wilson as Becky.

If Die Hard was High Noon—and it was—then the ambitiously crazy new thriller Becky is an attempt to make the Unforgiven of “wrong guy in the wrong place at the wrong time” action flicks. Becky is a troubled girl who has become distant and angry after losing her mother to cancer. She goes on a weekend getaway to the old  lake house with her father (Joel McHale), only to go ballistic when she finds out that he has invited his girlfriend and her young son. After a fight with Dad, Becky goes off by herself into the woods just in time to miss the arrival of a group of escaped convicts led by a bald  Kevin James with a swastika tattoo. The group take over the lake house while looking for  something they left behind years ago, taking everyone inside hostage. It’s up to Becky to fight these guys off—when her anger issues rise to the surface—watch out.

This movie is aspiring to be a lot more than just a gender-swapped Die Hard. It’s a subversively twisted, dark-horror comedy which explores the long overdue question: At what point does the good guy start enjoying all this killing a bit too much? The level of violence and gore is closer to horror territory than you might be expecting, but Wilson (Sharp Objects, The Haunting of Hill House and Star Trek: Picard)  smolders as the complex title character, and she is the primary reason why the film works. The descent of this troubled, young kid into a creative and methodical killer is a riveting thing to see.

That’s not to say that everything about the movie is as successful. It’s formulaic to a fault, and Kevin James as the heavy only kind of works. Try as he might to play it deadly serious, there is a particular sequence that goes for Tarantino-esque, shock-value humor with its use of extreme gore that backfires a bit because of the sudden feeling you are watching The King of Queens episode from hell.

Becky is an imperfect but self-aware B-movie that tries to comment on the damage that violence does on those who commit it, while at the same time reveling in exploiting the entertainment value of it all. It’s probably the guiltiest I have felt about thoroughly enjoying a movie since Coralie Fargeat’s payback thriller Revenge. It’s not nearly as exquisitely made as that film, but it’s arguably more thoughtful, and  the enthusiastic directorial team of Jonathan Milott and Cary Murnion (Cooties) is a good match to the material. This film is not for all tastes, but it has all the makings of the next big cult favorite. Becky is certainly one of the most unique action movies to come around in quite a while. –Patrick Gibbs