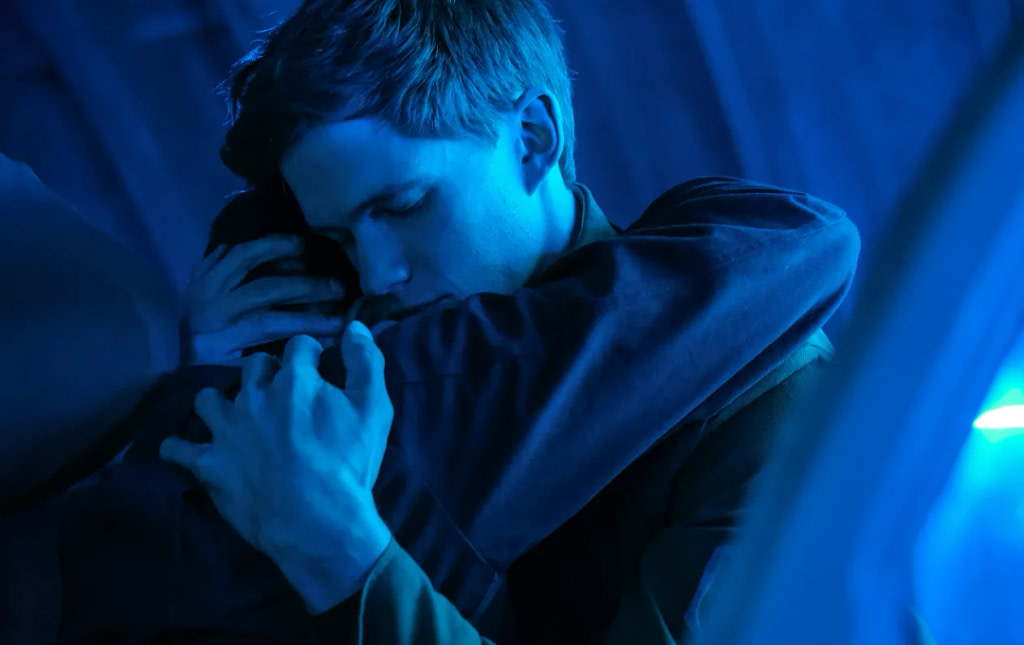 There's something important to be said in Firebird, and hopefully a story on its subject will be put in more skilled hands and inspired minds next time around. Photo Courtesy of The Factory.

The Factory and Film Estonia
In Theaters 04.28

The subject of authoritarian governments with laws prohibiting same-sex relationships is a timely one indeed, and a good story on the subject is entirely welcome Sadly, Firebird, the feature debut from music video and documentary director, Peeter Rebane, only demonstrates the difference between having a good story and telling it well.

Firebird follows Sergey (Tom Prior, Kingsman: The Secret Service), a private stationed at the Haapsalu Air Base in Estonia, who is looking forward to the end of his mandatory service in the Soviet military. Sergey’s closest friend is Luisa (Diana Pozharskaya), a local girl who works for the commanding officer, Colonel Kuznetsov (Nicholas Woodeson, Skyfall, The Death of Stalin). Luisa is smitten with Sergey, but while she’s looking for a husband, Sergey’s mind is focused on dreams of moving to Moscow to become an actor. When Sergey meets Roman (Oleg Zagorodnii), a dashing fighter pilot, the two find common ground in a mutual interest in photography.

Sergey and Roman attend a ballet together—Stravinsky’s Firebird—and on the way through the forest back to the base, the obvious sparks between them catch fire and they end up sharing a passionate kiss in the rain. As the romance blossoms, the danger of being discovered becomes a serious concern. Complicating matters for Sergey is Luisa’s growing interest in Roman, who is under suspicion of engaging in secret homosexual activity, and must do whatever it takes to maintain the image of a model Soviet officer, which will include taking a wife.

As I describe the plot, I find myself thinking “that sounds pretty interesting,” and yet as I watched Firebird, my mind spent more time wandering than a wizard in a Tolkien novel. Based on the memoir The Story of Roman by Sergey Fetisov, Firebird has a compelling, true story at its core, but the film plays out as a disappointingly conventional melodrama full of flat characterizations and stock sequences that we’ve all seen many times before. The screenplay, by Rebane and Prior, doesn’t give us characters so much as character types: the young romantic, the aloof and pained handsome soldier, the sweet but naive country girl, the lurking KGB agent, the jealous friend, etc., and the film never lets us get to know or care about any of them as people. In fact, when Roman shouts at Sergey, “You know nothing about me!” during an argument, it’s hard not to shout back, “None of us do!”

Worst of all, that includes Zagorodnii, whose dull, distracted performance isn’t entirely his fault but does a disservice to the real Roman. There are long sections of the film that feel like it’s just one “let’s go around the corner, shut the door and make out” sequence after another, to the point of becoming infuriatingly repetitive. Still, this is better than the laughably heavy-handed symbolism of a sex scene that, just at the point of climax, cuts to a shot of two jets flying side by side—afterburners blazing.

While Prior gives the strongest performance, that’s a big part of the problem: as a screenwriter, his primary concern seems to be providing plenty of speeches and awards clip moments for Sergey at the expense of ever giving a moment to what anyone else is feeling. Luisa in particular is woefully short-changed when she should have been an interesting and sympathetic character. The story is presented simply enough that I felt that I should be caring about it on some level, but there’s just such a distant feeling to the proceedings that I never felt invested.. It’s not that Firebird is a terrible film—it does move swiftly enough, and it’s competently executed—but the sense of gravity just isn’t there. A great love story should have the audience falling for both characters. While I cared in principle about the inalienable right of Roman and Sergey to be together, I didn’t feel any attachment to either of them and as such didn’t much care if their love worked out or not.

Firebird is an important film in terms of its subject matter, and it gets its message across by literally spelling it out with a closing crawl and a plea to visit its website. But this is a movie of other movies. It owes more to the filmmakers having seen every doomed love affair story from The English Patient to Brokeback Mountain than to any  connection to honest human emotion. There’s something important to be said here, and I hope that a story on the subject will be put in more skilled hands and inspired minds next time around. –Patrick Gibbs