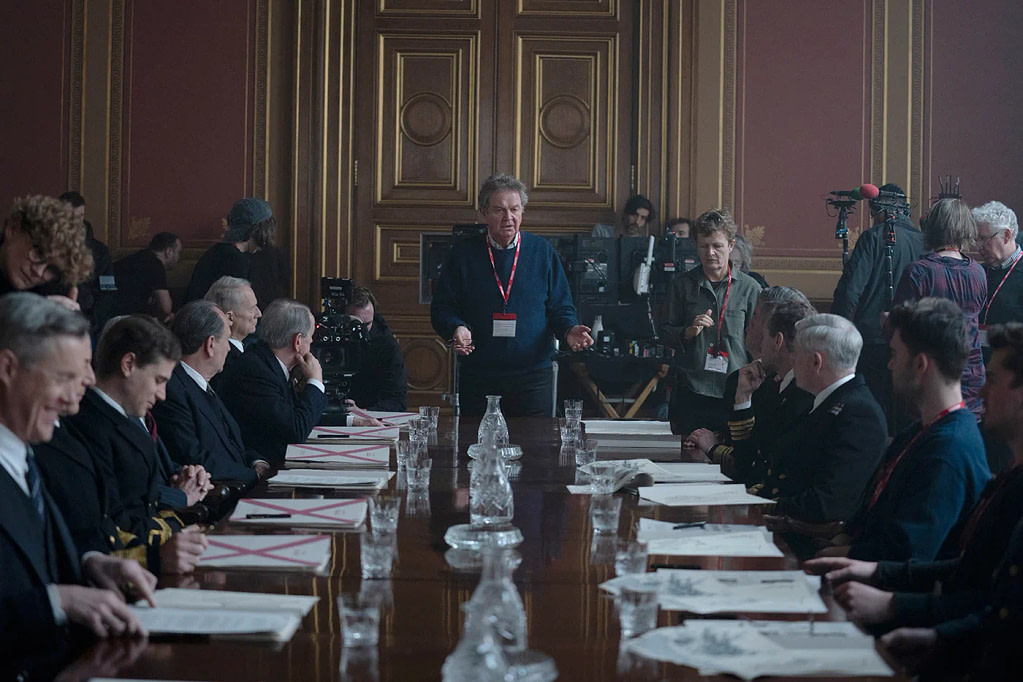 It was nearly 24 years ago that John Madden gave us Shakespeare in Love, the Oscar winning dramedy set during the writing and performing of Romeo and Juliet. The celebrated director’s new film, Operation Mincemeat, is also about the lasting impact of a great story, although the setting and circumstances are quite different.

“It’s such an extraordinary tale, from its minutest granular level right up to the highest zones of the corridors of power,” Madden says of Ben MacIntire’s nonfiction book, which served as the inspiration for the film. The book was brought to Madden by a friend, Michelle Ashford, creator and executive producer of the acclaimed Showtime series Masters of Sex. As they were working together on developing that series, with Madden directing the pilot episode, Ashford came across Operation Mincemeat, and proposed to Madden that they collaborate, with Ashford writing and Madden directing.

“Cholmondeley’s attraction to Jean soon takes a backseat to the sparks between William and his beloved Pam, a fabricated love story between two people who never existed.”

In 1943, Hitler had a firm grip on Europe during the second World War. The Allies were planning an assault on the Axis stronghold in Sicily, but it was vital that Hitler’s forces be concentrated elsewhere. Operation Mincemeat was the codename given to a plan headed by two intelligence officers, Ewen Montagu and Charles Cholmondeley, who plotted to leak false information to the Germans through Major William Martin. The plan was for Martin to be found dead, washed up on the shore off the coast of Spain. He would be carrying correspondence between Generals, indicating that an attack on Sicily was merely a ruse to turn the enemy away from planned invasions of Greece and Sardinia. He would also be entirely fictional, a made-up character played by a body taken from the morgue.

Martin would live only in the realm of imagination, carefully crafted by Montagu and Cholmondeley, who are portrayed in the film by Colin Firth and Matthew MacFadyen. If those two names conjure similarly romantic images in your mind, it is with good reason. It wasn’t until Madden was telling Firth’s agent about casting McFadyen as Cholmondeley that the director made the connection. “He said, ‘Good Lord, that’s two Darcys!’” Madden says with a hearty laugh. Firth famously played the iconic Mr. Darcy in the 1995 BBC adaptation of Jane Austen’s Pride and Prejudice, while McFadyen would later play the role in Joe Wright’s 2005 film adaptation. While the connection had never even occurred to Madden when casting them, he does admit that it adds a sublime grace note to the unconventional romantic story at the center of Operation Mincemeat.

In order to make Major Martin a fully believable person with an intricate history and backstory, Montagu and Cholmondeley decided to include a love letter to a sweetheart back home, to be placed on the body. In the film, the writing of the letter and the detailed creation of the relationship between William and his beloved falls to Montagu and Leslie Jean (Kelly McDonald), a widowed government employee who is first recruited to supply her picture for use in the letter, but she works her way to a seat at the table planning the operation. Cholmondeley’s attraction to Jean soon takes a backseat to the sparks between William and his beloved Pam, a fabricated love story between two people who never existed.

“They can’t tear themselves out of each other’s company because of the intensity of what they’re trying to do.”

Montagu and Jean, however, are lonely and real, and they find their emotional investment starting to spill over into their work. “The people who have fallen in love are not aware that they have,” Madden says. “They can’t see that clearly. They just know that they hugely enjoy filling out this fiction. They can’t tear themselves out of each other’s company because of the intensity of what they’re trying to do.” Madden admits that perhaps there may be a small echo of Shakespeare in Love, in which Will Shakespeare and Viola de Lesseps’ feelings for each other are so deeply rooted in those of the characters of Romeo and Juliet.

Madden has gotten used to working with the cream of the crop when it comes to casting his films, whether it’s guiding Gwyneth Paltrow and Dame Judi Dench to Academy Award wins or casting Jessica Chastain in one of her first lead roles in The Debt. But when it comes to the question of what type of actor he’s drawn to working with, Madden is uncertain he has one. “Boldness in an actor is an absolutely invaluable quality,” Madden says. “One of the things that was wonderful about this film [was that] it has some very small incidental characters who take the movie in their hands and hold it for a while—I point to as an example, an incredibly gifted actress, Gabrielle Creevy.”  Creevy is a Welsh actress who has a very small role as Doris Michael, the sister of Glyndwr Michael, the homeless man whose body was used to play the part of Major Martin. “She’s quite brilliant, and she stops the movie dead. And she’s surrounded by Colin Firth, Mathhew McFadyen, Johnny Flynn and the late, great Paul Ritter, and just totally commands the scene  … That’s just talent, is what that is. And a gift. So that’s what I would say you hope to find.”

For John Madden, who is in his fourth decade directing for the screen, Operation Mincemeat, which comes to select theaters on May 6 and Netflix on May 11, is a noteworthy entry in a magnificent career. For audiences, it promises to be one of the most satisfying experiences of the summer moviegoing season. –Patrick Gibbs

Read more interviews with filmmakers by Patrick Gibbs:
LDS History Meets Murder Mystery in Under The Banner of Heaven
Simchas and Sorrows Finds Comedy In Relationships and Religion