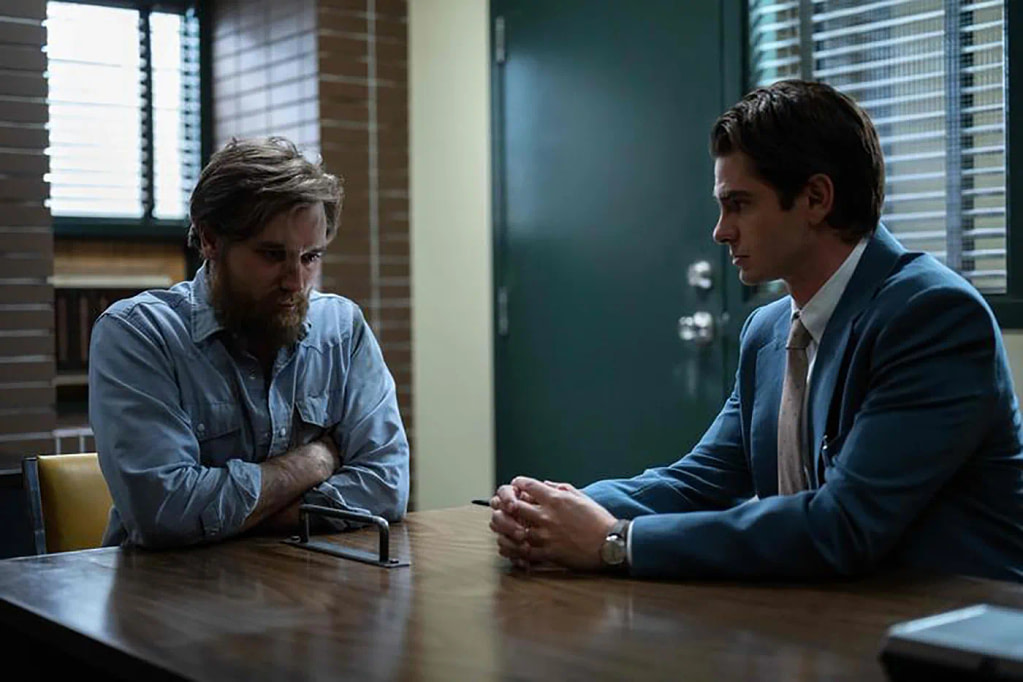 Under The Banner of Heaven serves as a sobering reminder that, 38 years later, wounds left by the series-inspiring Lafferty case are not likely to go away any time soon. Photo Courtesy of FX and Imagine Entertainment.

LDS History Meets Murder Mystery in Under The Banner of Heaven

In the early morning hours of July 24, 1984, Brenda Wright Lafferty and her 15-month-old daughter, Erica, were brutally murdered inside their home in American Fork, Utah. The violent tragedy was made all the more disturbing when Brenda’s brothers-in-law, Ron and Dan Lafferty, were arrested and charged with committing the heinous crime. Their motive? God told them to do it—or so they said. The Lafferty case, and its wider implications for Utah and the complex history of The Church of Jesus Christ of Latter-day Saints, are the subject of Jon Krakauer’s book Under The Banner of Heaven, and the new miniseries adaptation, created, written and produced by Oscar winner Dustin Lance Black and starring Andrew Garfield and Daisy Edgar-Jones.

Under The Banner of Heaven follows the story through the eyes of Detective Jeb Pyre (Garfield), a fictionalized version of the detectives who worked on the case. Pyre’s investigation leads him to the Lafferty brothers’ involvement in Fundamentalist Mormonism, and secrets about Church history will cause him to question his own beliefs.

First published in 2003, Krakauker’s book mixes the Lafferty case with an account of the early days of the religion, including details that weren’t widely known at the time, such as more information on the beginnings of the practice of polygamy, including founder Joseph Smith’s own secret, multiple marriages. For Dustin Lance Black, who grew up in a staunch Mormon home in San Antonio, Texas, the book was a must-read. “I’d had many questions about the faith that I knew I wasn’t supposed to ask,” Black says. “And here were these answers … It was starting to make sense why certain men felt like it was okay to treat my mother as less-than-equal because of her gender.” Black left the church when he came out as a gay man in his senior year of college, but the majority of his family is still active in the religion. As a former member who still had questions, Black found Krakauer’s book to be both informative and cathartic.

“Understanding, ‘oh, that probably didn’t come from God. That probably came from men’s desires.’ That’s very helpful. It’s liberating.” Black says. However, Black wants to be clear that that the mindset that “women are lesser than men” in a religious context is far from an exclusively Mormon issue, one that should concern people of faith everywhere. “I would say, if you accept that without question, you are knowingly praying to a misogynist,” Black says. “Is that what you want to do? Is that what you want to teach your children to do? A misogynist God isn’t worth my prayers.”

“I’d had many questions about the faith that I knew I wasn’t supposed to ask,” Black says. “And here were these answers … It was starting to make sense why certain men felt like it was okay to treat my mother as less-than-equal because of her gender.”

The book demonstrates how the doctrine and practice of polygamy, as well as emphasis on a male priesthood authority governing both the church and the home, created a culture of subjugation for women in the church. Black was passionate about exploring this theme in his version of Under The Banner of Heaven, in part because it was at the root of Brenda Lafferty’s experience. “Brenda was a mainstream, active Mormon,” Black says, noting that Brenda came from a relatively progressive upbringing, contrasting the toxic masculinity and zealotry of the male-dominated Lafferty clan.

“She wanted to ask questions because it didn’t square with how she was raised,” Black says.  Brenda’s father, James Wright, served as a bishop but raised his daughters to be strong and independent. “I adore him,” Black says of Wright, whom he met while researching the story.  “Do we agree on everything? No. But he accepted me. He knew I was a gay guy, we talked about it, and he accepted me. That’s the kind of Mormon—that’s the kind of Christian, and frankly the kind of religious person—that I’m excited to meet. Who understands that ‘yeah, there’s good to be found in these created systems. But if we go back 2000 or 200 years, to the original rules and we start to follow them, that’s dangerous.”

For Daisy-Edgar Jones, the actress portraying Brenda, this wasn’t just a great role, it was a chance to honor the memory of Brenda. “I really felt, when I read the scripts, that this was a real chance to celebrate the person and her life,” Jones says. “The Brenda that I came to know was one that was so full of joy, first and foremost, but also incredibly intelligent and empathetic.”

Andrew Garfield is no stranger to portraying religious characters. He’s been a young Jesuit Priest in Martin Scorsese’s Silence, a Seventh Day Adventist serving in World War II in Hacksaw Ridge, and most recently, televangelist Jim Bakker in The Eyes of Tammy Faye. But for his first Mormon character, Garfield wanted to be certain that he got it right, and flew to Salt Lake for a figurative baptism by immersion.

“I spent some time there with some amazing people,” Garfield says.  “Mormons, ex-Mormons, gay Mormons, detective Mormons, Bishop Mormons—the whole gamut… I wanted to be as immersed as possible so that I could just show up on set and feel like I could live as the character,” Garfield says, “and then of course the story is about the kind of crumbling of the psyche of that religion in my character, and it was really a fascinating journey to go on.”

Under The Banner of Heaven premieres exclusively on Hulu on April 28, The bold, new series serves as a sobering reminder that, 38 years later, the wounds left by the Lafferty case, as well as the struggles of people of faith looking for answers, are not likely to go away any time soon.