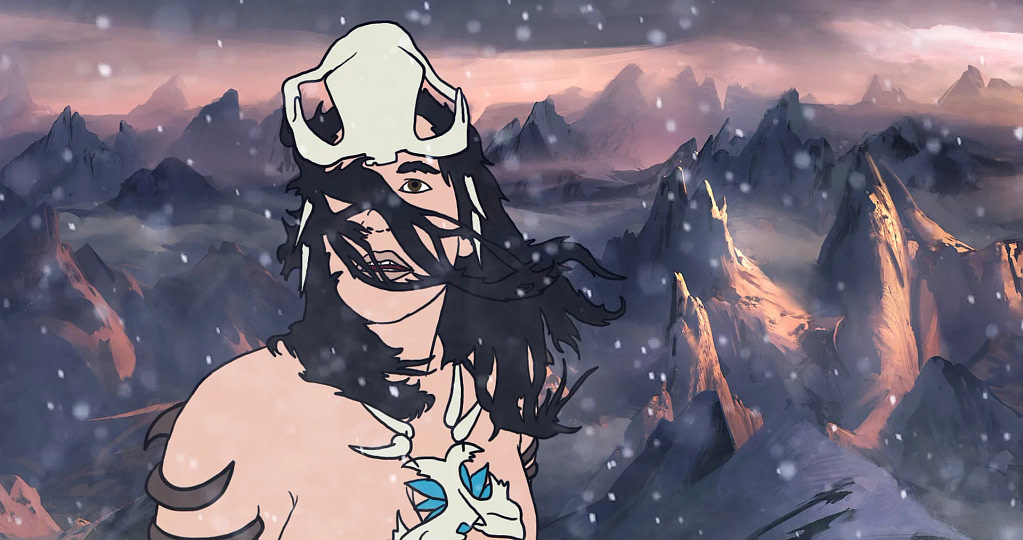 Film Review: The Spine of Night

It is clear from the beginning of The Spine of Night that it is a movie that isn’t trying to make any friends. The animated feature, written and directed by Philip Gelatt and Morgan Galen King, opens with a nearly naked, bone-clad woman named Tzod (Lucy Lawless) ascending a storm-battered mountain under the light of the cosmos. What she finds at the summit is The Guardian (Richard E. Grant), the last in an ancient line of sentinels tasked with protecting The Bloom, a sacred flower with magical properties. If that sounds like a lot, allow me to reassert that this is how the movie begins.

The bulk of what follows is a hand-drawn animation spectacle that is indebted to a great deal of influences. It is as if the worlds of Masters of the Universe and Mad Max had a grotesque baby that was raised solely on the literary work Beowulf, the philosophy of Friedrich Nietzsche and the music of Behemoth. There are shots that bring to mind the entrance of King Xerxes in Zack Snyder’s 300 and the siege of Gondor in Peter Jackson’s The Lord of the Rings: The Return of the King. If you’re not particularly into any of the above, then I would probably steer clear of this movie. It is as gruesome and ambitious as any animation I’ve seen, almost to a fault.

One of the film’s strengths is its beautiful, hand-drawn animation, a technique that has largely gone out of style in mainstream Western animation, which has favored computer animation since Pixar revolutionized the style in the ’90s. Not only is it refreshing to see an animated feature that is such a contrast to the Disney-dominated landscape of the last 30 years, but it is surprising to see one that is the antithesis of everything popular Western animation has done in that time as well.

The Spine of Night is as impenetrable as it is excessively violent—plenty of village-razing, immolation and evisceration for the whole family. It is overly-ambitious, trying to tackle topics ranging from nihilism to religious tyranny. Lofty ideas take precedence over a compelling narrative, so there is very little for the viewer to latch on to as far as characters go. There is a clear protagonist and antagonist, but the rest is left to conjecture. The world of the movie is rich, introducing entire civilizations and religious orders, but the filmmakers take no time to explore any of it. If not for the visual embodiment of psychedelic, blackened death metal shown on-screen, the overstuffed plot would easily collapse under this ambition. With few exceptions—Lawless, Grant and Betty Gabriel among them—the voice performances also leave quite a bit to be desired.

Despite The Spine of Night’s shortcomings, it is an undeniable feast for the eyes. Its less-than 90-minute runtime is a huge benefit, as the film likely couldn’t bear to be extended much beyond that. If the filmmakers stuck with one of the two (or three) movie ideas that are contained within the movie, we may have had a cult classic on our hands. Regardless, there are those who will find much to love here—fans of heavy metal, blood-soaked hand-drawn animation and psychedelic visuals will likely find a home in the world of The Spine of Night. For the faint of heart and those who cannot stomach 90 minutes of style over substance, your feet are best rooted in our world. –Brandon Ermer