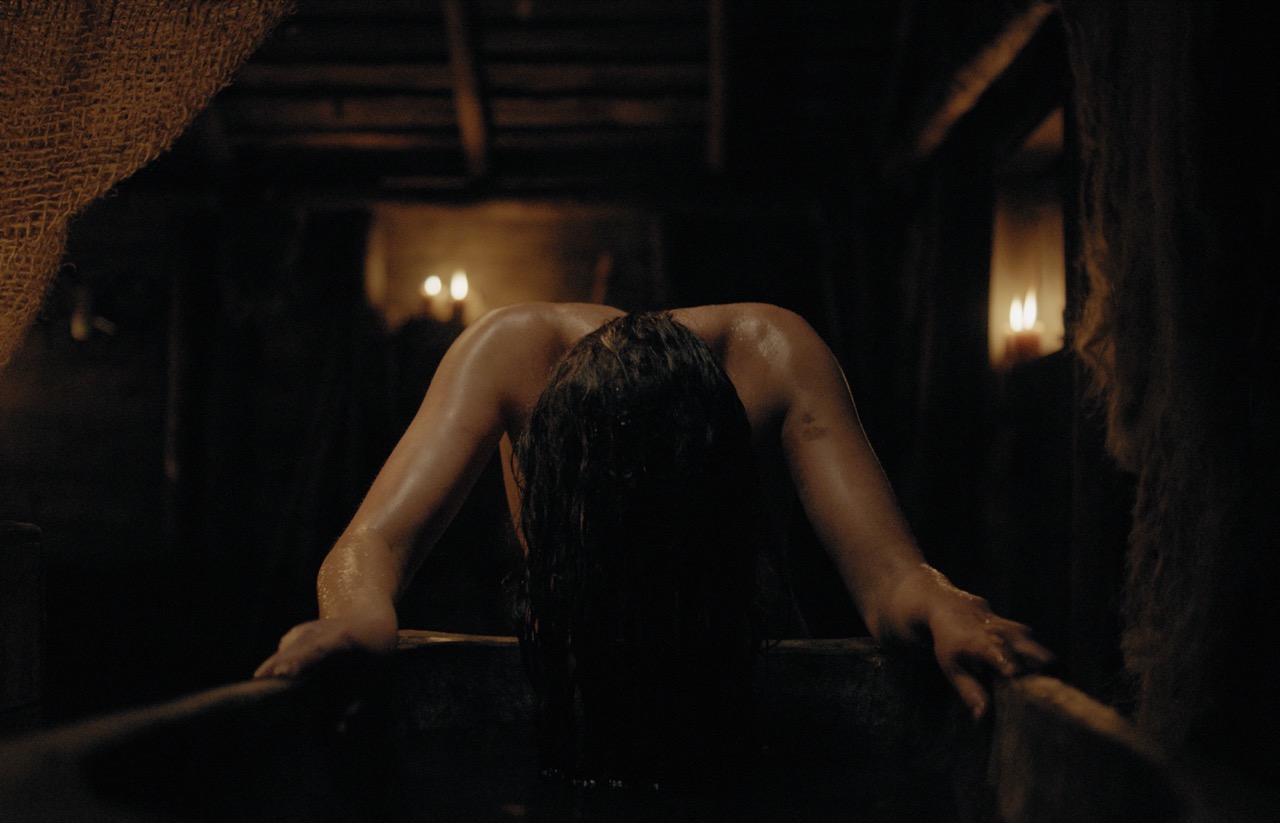 Film Initiative Africa and KykNET Films
In Theaters 06.18 and Streaming on Video on Demand 06.25

When I review children’s films, I watch them with my 5-year-old nephew, Timmy. I like getting the perspective of the target audience. There are times when I feel like that’s more needed with horror films, since they tend to really not be aimed at me, but it turns out that for Gaîa, a cerebral yet visceral art house horror film from South Africa, I didn’t need backup.

Gaîa opens with a pair of forest rangers, Gabi (Monique Rockman, Number 37) and Winston (Antony Oseyemi, The Congo Murders), on a routine surveillance mission in a primordial forest. When they encounter unexpected danger and are split up, Gabi is saved by two off-the-grid survivalists, Berend (Carel Nel, Raised by Wolves) and his son, Stefan (Alex van Dyk, The Harvesters), living a post-apocalyptic lifestyle. What is initially a welcome rescue grows more suspicious, as the boy and his philosophical father seem to have their own religion and a mysterious relationship to nature.There are many suspicious aspects to their existence, but when the cabin is attacked by strange beings one night, she learns that there is a greater threat in this unrelenting wilderness.

Director Jaco Bouwer (Die Spreeus) casts a visually intoxicating spell, creating some deliberate confusion as to what is real and happening now, and what is an almost hallucinatory vision. Gaîa, which gets its name from the Greek Primordial Earth Goddess, is the kind of film that you have to give your full attention to, or it can easily seem like it’s purely weirdness for weirdness’ sake. But screenwriter Tertius Kapp (Griekwastad) has created a mesmerizing allegorical tale, one that is disturbing but quite intriguing.

The cinematography by Jorrie van der Walt is stunning in the way it creates beauty out of ugliness and vice versa. There’s a hypnotic quality at work here that’s hard to define, except to say that it will either work for you or it won’t. I’m not saying that absolutely everything about Gaîa works perfectly, but it held me glued to the screen and engaged my mind and my senses. It has almost everything I wanted from In The Earth, which completely failed to deliver.

Rockman makes for a strong protagonist. For my money, the importance of actually caring about the characters in horror is often forgotten but cannot be overstated. But the performance that Gaîa is going to be remembered for is Nel’s spellbinding portrayal on the fanatical Berend, one of the scariest but most sadly believable heavies I’ve seen in a movie in years.

Gaîa is very much the kind of horror film that horror fans yell at me over, demanding to know why critics liked it. The answer is both that it’s art and actually means something. I’m not necessarily saying that it’s the greatest film, but it’s a fascinating one that’s impeccably executed, and aspires to something beyond boo scares and cheap exploitation.

That’s not to say that things that go bump in the dark are without value. I enjoyed A Quiet Place Part II as much as anyone, and in fact, more than I did this film—but there’s a level immaturity and even stupidity to, say, The Conjuring and so many of the fluffy fright flicks that are so popular these days that that tries my patience. Fans have to assign a certain gravity to them in order to justify being so terrified by this twaddle, as opposed to just embracing the silliness as part of the fun.

While there’s a strong element of the supernatural at play, Gaîa is about psychological horrors more than anything else, because there is nothing more frightening than the places that our minds and our actions can take us when our beliefs point us in the wrong direction. So if you’re looking for an excuse to jump and scream a lot and spill popcorn, move along—this is not the horror movie you’re looking for. But if you want something with actual substance to discuss after you’ve left the theater, this fantastical foliage-and-fungus fest may be just the kind of weird movie that starts to grow on you. –Patrick Gibbs