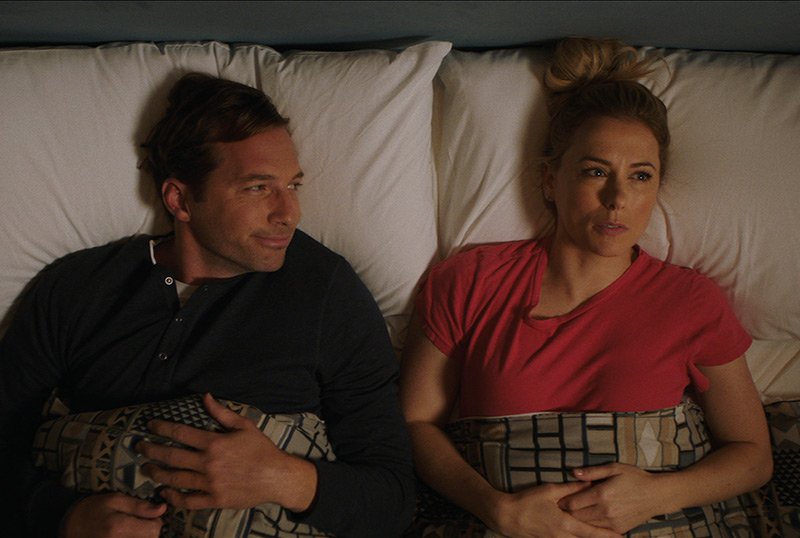 Sometimes the reason to hate a film is because it is badly done, obnoxious or painfully derivative. But sometimes, that’s not that at all. Sometimes you hate a movie because something about it hits close to home and makes it excruciating to watch. But in the case of Good on Paper, either reason will do, and I will mourn the 92 minutes of my life that was lost to this awkward and deeply uncomfortable mess for years to come.

Andrea Singer (Iliza Shlesinger, Spenser Confidential) has always put her stand-up career first, and while dating came easy, love has never been a priority … That is, until she meets Dennis (Ryan Hansen, 2 Broke Girls) a quirky nerd with a disarming charm, who coaxes her into letting her guard down. Her best friend, Margot (Margaret Cho, Face/Off), isn’t convinced that Dennis is all he seems, and she urges Andrea to embark on a wild goose chase to uncover answers as to who he really is. Andrea questions whether she is being a fool for believing Dennis, or a fool for doubting him.

The movie, which is written by Shlesinger, is billed as a “mostly” true story. According to the conclusions I’ve jumped to, that basically means that the bulk of the situation in regard to the relationship dynamic between Andrea and Dennis happened, but the actions that Andrea takes and their outcome are wildly embellished, to say the least. There may be those who claim that Good on Paper is an angry, anti-male rant, and I would argue that it has a right to be angry, and that it’s not anti-men, and—if anything—it’s kinder to the type that it portrays than they really deserve.

I’m behind Shlesinger completely on the point she’s trying to make, and as an actress, she comes out of this nicely. But Good on Paper is still a poorly constructed script that tries to get away with not only shamelessly stealing the iconic Seinfeld structure of cutting away to sequences of the main character incorporating the topics going on in the story in standup comedy routines, but it seems to make the decision to commit to this stolen idea at a random point in the movie. If they’d managed to make this bit feel like an homage invoking a classic, it might have worked, but the tentative commitment to the bit makes it just feel like creative theft.

Director Kimmy Gatewood is a comedian and actress known for GLOW, and Good on Paper marks her major directorial debut. Unfortunately, it’s a weak one. The movie is sluggish in its pacing, and then chooses to get far too broad in its final third, which is primarily a failure of the writing. But Cho’s obnoxious and absolutely never funny mugging is insufferable, and both Shlesinger and Gatewood deserve partial blame for the fact that her character doesn’t work at all.

Honestly, it’s tempting to say that in terms of comedy, Good on Paper fails completely, but Shlesinger does have the occasional wisecrack that really zings because of her delivery, and there is one bit about her desire to direct someday that I could watch over and over again. By the end of the movie I found myself really wanting to be able to say it was good because I found myself wanting to see her star in something better, but the wrap-up is so preposterous that it becomes insulting. I have to believe there was a better approach to this story than making it a “Lucy and Ethel and their crazy schemes” comedy, but instead of comedic freshness, it lapses to resorting to tired and degrading stereotypes about the way women behave.

Good on Paper proves to be aptly titled because regardless of how it looked on the page to the people who decided to produce the film, it doesn’t translate to the screen. It’s an unfortunate misfire that gets some props for trying to address an important subject in shedding light on an all-too-real brand of misogyny, but it doesn’t work on any other level, and it’s neither entertaining nor empowering. I found it so difficult to get through that I could only watch for 10 or 12 minutes at a time without taking breaks, and it’s my hope that it lands Shlesinger more work in front of the camera, but I’m fine if it doesn’t get her much behind it. –Patrick Gibbs