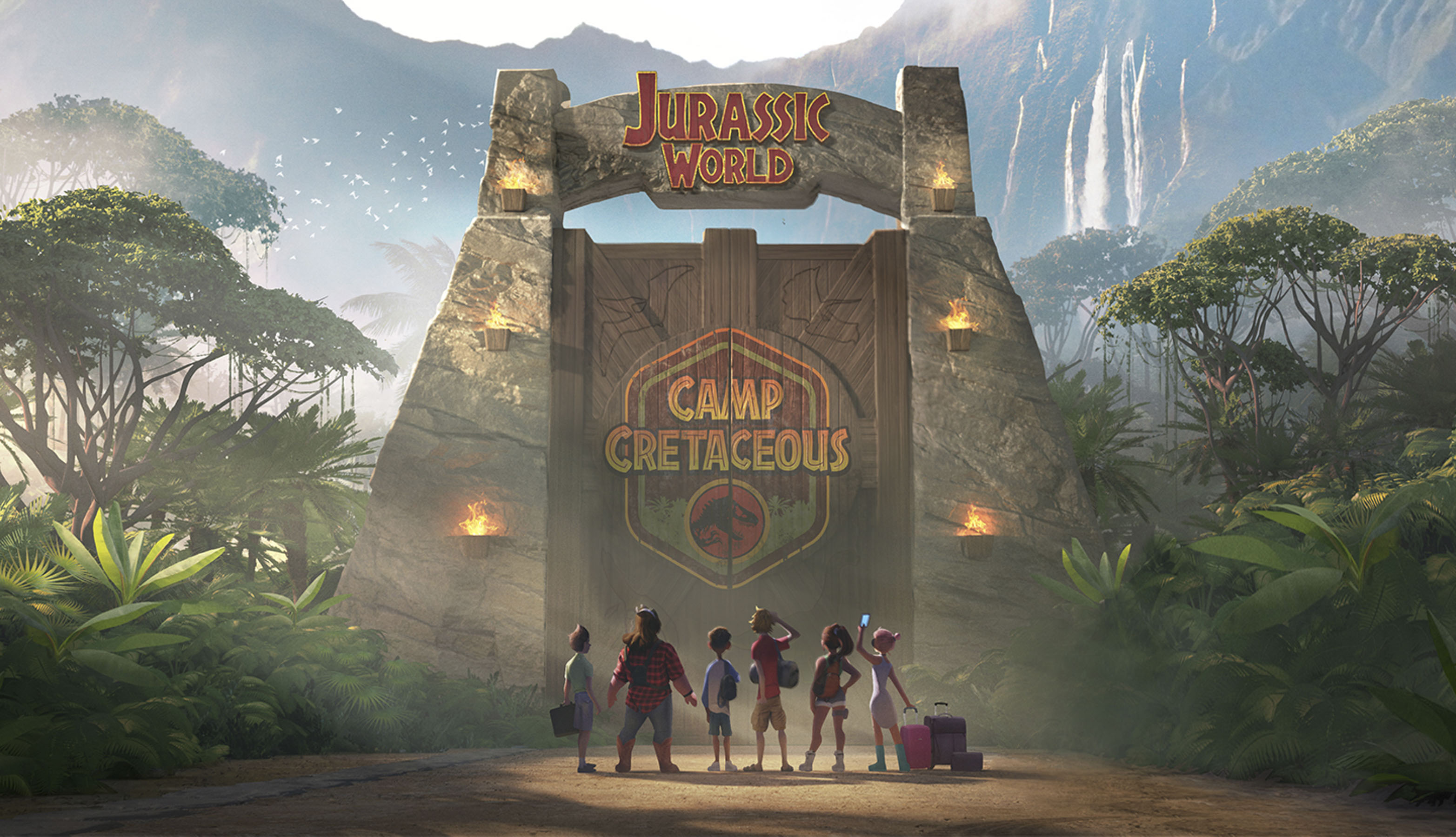 When reviewing films and television, you have to grade on a curve. If I’m reviewing Bumblebee, I’m not holding it to the same standard as Three Billboards Outside Ebbing, Missouri. So it might surprise you to see me give a good review to a cartoon spinoff of Jurassic World in the same week that I gave a bad one to a serious Oscar bait flick like The Devil All The Time, but the reason couldn’t be more simple: One of them is just diverting entertainment that knows exactly what it’s trying to accomplish and does so very well, and the other is pretentiously grubbing for awards and acclaim but fails to deliver anything substantive.

Jurassic World: Camp Cretaceous is an eight-part animated series that takes place simultaneously with the first Jurassic World movie (it’s the Rosencrantz & Guildenstern Are Dead of running and screaming), and it follows a group of six middle school-aged kids trapped at a new adventure camp on the opposite side of Isla Nublar. When dinosaurs are unleashed across the island, each kid realizes survival rests on their shoulders and those of their fellow campers. Unable to reach the outside world, they go from strangers to friends as they band together to survive the dinosaurs and uncover hidden secrets that are darker than they can imagine.

If you’re a Star Wars fan who won’t lower yourself to watch Clone Wars or Rebels, this is not for you. And if you’re one of those people who complains about the fact that there always has to be a kid worked into the Jurassic movies, well, first off, you’re ignoring the rudimentary fact that author Michael Crichton was adamant that a fundamental element of his vision was always about seeing real-life dinosaurs through the eyes of kids. But also, yeah, you’re not going to enjoy this. It’s aimed at older kids, as well as those who are still in touch with their inner child enough to unashamedly watch a cartoon and still get chills at seeing a dinosaur on screen. The series has the feel and structure of the films, but it’s divided up into eight installments that are around 24 minutes in length on average. It’s also rated TV-PG, which makes it tame by Jurassic standards, but with eight years of age and above as a good general viewing guideline.

The main characters are diverse and pretty likable, particularly the protagonist, Darius Bowman (voiced by Paul-Mikél Williams), a socially awkward dinosaur fanatic who becomes something of a leader to the group. Darius wins a VR game, and the prize is being one of the first guests at Camp Cretaceous, which plays like a nice little reference to Ready Player One, and that’s not the only Amblin movie that gets a shout out. Disney’s Channel’s Jenna Ortega is also endearing as Brooklyn, a young social media influencer in search of validation.

The musical score integrates plenty of classic themes from both John Williams and Michael Giacchino, and much like the films, it’s less about story than about setting up a basic structure for plenty of action and suspense set pieces—and it’s got several good ones.

The fact of the matter is that I have a few select fictional happy places, and Isla Nublar is probably number one. For me, an escape to even a completely CGI version was a very welcome diversion, and I’m not the slightest bit embarrassed by that. But I also want to reiterate that if you’re not feeling excited about another entry in the franchise—and a cartoon one at that—it’s not likely to win you over. It’s made for a specific target audience, and they’ll eat it up like it was a lawyer sitting on a toilet. Camp Cretaceous is what it is, nothing more and nothing less. It’s a slight but enjoyable mix of popcorn movie and chocolate-cereal cartoon. It’s not in the same league as DreamWorks’ Tales of Arcadia series, but it’s good fun, and at the time of this writing, I’m already well into my second viewing. –Patrick Gibbs