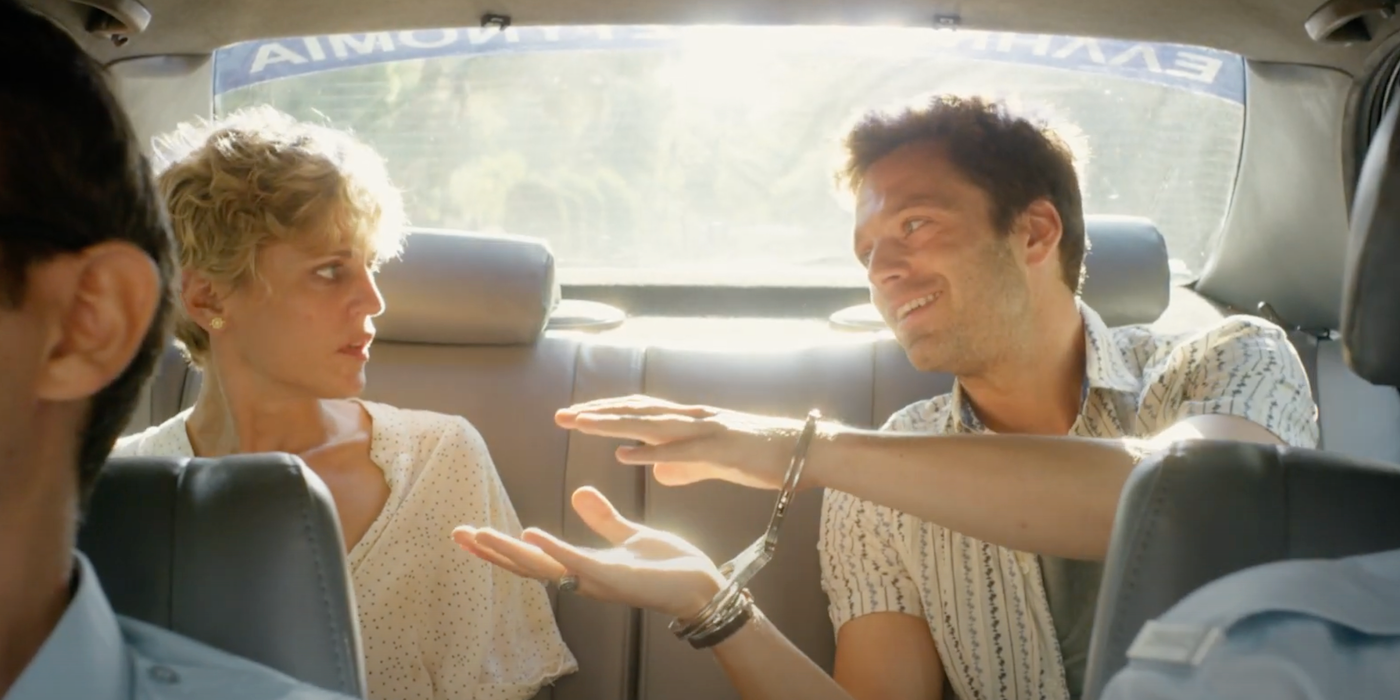 Protagonist Pictures
In Theaters and Streaming on Video on Demand 04.16

I’m not going to say that we’ve all had a relationship like the one portrayed in Monday, the new film from Argyris Papadimitropoulos, but I think a lot of us have. Maybe not as wild and international as portrayed here—some of us did it at home and on a budget, and a lot more PG-13, but I’m talking about the basic concept of that impulsive relationship that sparks out of nowhere and feels so exciting that you get swept away in it, but is ultimately a more of prolonged weekend romp that something that can possible work in real-world, Monday through Friday life. It’s something most of us go through on one level or another. It’s part of life, but so is irritable bowel syndrome. That doesn’t mean I want to watch that captures the essence of it.

Monday stars Denise Gough (Juliet, Naked) as Chloe and Sebastian Stan (the Captain America films, The Falcon and the Winter Soldier) as Mickey. These two Americans, in their mid-30s are both living in Athens—because a movie like this never takes place in Dubuque—and meet in the heat of summer one whirlwind weekend. The chemistry between them is undeniable. When Chloe’s time in Greece is drawing to a close, she decides to give up her high-flying job back home and explore whether one weekend’s passion can blossom into something more.

It’s always a bad thing when a movie is a full hour longer than it needs to be, but when the runtime is only an hour and 56 minutes to begin with, including credits, that’s pretty deadly. The first half follows a steady beat of party-sex scene, party-sex-scene talk, with the occasional, additional sex scene thrown in for spontaneity. The word “Friday” appears on screen at the beginning of each individual section of the movie, though it’s unclear as to whether that’s meant literally or metaphorically, or whether anyone cares. The second half is sex scene, fight scene, sex scene, sad party-sex-scene fight, pretentious introspection, self-destructive behavior, sad party-sex scene, public-nudity fight…until it finally puts itself out of our misery.

Papadimitropoulos (Suntan) has a certain flair for picturesque, atmospheric style. Gough gives a strong if less-than-charismatic performance, and Stan is quite charming playing a character who isn’t tortured by demons. But the movie is an aimless, self-involved slog that’s neither entertaining or artistically ambitious; it’s just there. I honestly believe that most of us spend less of our lives naked than the Gough and Stan do over the course of an interminable hour-56—check the clock minutes. I’m far from a prude, but I really didn’t need to ever see Bucky’s “Winter Soldier.”

The fact that these characters aren’t likable enough to be the leads in a movie seems almost immaterial because they aren’t necessarily supposed to be. They are more likable separately than they are together, and if the movie has a point, that’s probably it. But it’s just so excruciatingly done that it made me want to scream, and while it earns some minor points for ending differently than I expected, that ending is so abrupt that it almost feels accidental.

Still, I can’t deny that there’s a level of truth to the film, even if it’s a Hollywood-ized version of it. As a cautionary tale against getting swept up in a relationship simply for the sake of being in one, or defining yourself by the need to be with someone, it makes its point fairly effectively in the same way that those driver’s ed videos do about wearing your seatbelt or not driving drunk, which is to say that the feeling of “I’m glad I never have to watch that again” may well overpower any lasting lessons. No one who’s young, stupid and lonely is going to watch Monday and say “Gosh, yes, Batman, when you put it that way …” And no one who has ever been this stupid wants to spend this much time being reminded of it.

To call Monday a disposable film would be hyperbole, because it implies that it serves its purpose once. The last time I was this happy that something was over, it was followed by Lady Gaga performing the National Anthem. –Patrick Gibbs