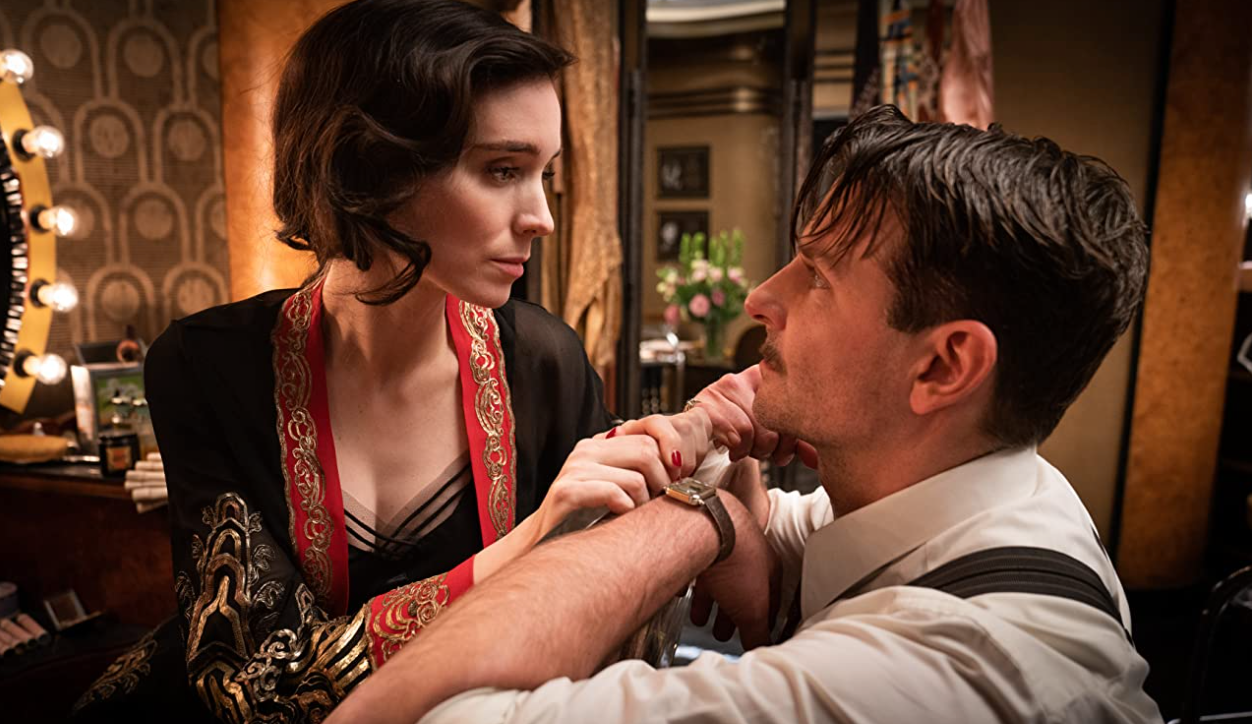 TSG Entertainment and Double Dare You Productions
In Theaters: 12.17

The yuletide season is here at last, and there’s even snow on the ground. But if you’re one of those people who just can’t get enough of the mysterious and spooky and are already looking forward to next Halloween, Nightmare Alley may be just the trick—and the treat—for you.

Nightmare Alley stars Bradley Cooper (A Star is Born) as Stanton Carlisle, a 1940s drifter who wanders into a traveling carnival. He starts out doing manual labor but gets taken under the wings of a mentalist, Pete (David Strathairn, Nomadland) and Pete’s wife, the resident clairvoyant, Zeena (Toni Collete, Dream Horse), who school him in the trade—he takes to it like a fish to water. Stan combines these skills with his smoldering charisma, allowing him to take his act and his girlfriend, Molly (Rooney Mara, The Girl with the Dragon Tattoo), to New York City, where Stan finds great success duping the upper crust of society. But when Stan meets the clever and seductive psychiatrist Dr. Lilith Ritter (Cate Blanchett), the two hatch a scheme that takes greed and deceit to new and dangerous levels.

Guilliermo del Toro, the Oscar-winning director of The Shape of Water, knows how to create a beguiling visual feast as well as any filmmaker who ever lived, and Nightmare Alley, based on the novel by William Lindsay Gresham and the 1947 film by Edmund Goulding, is a dark and titillating journey into a deeply unsettling world. Cooper gives a tour-de-force performance as the roguish protagonist, and Blanchett is deliciously devious as his partner in crime. But Richard Jenkins outdoes them both as their mysterious and obscenely wealthy mark, Ezra Grindle.

There’s no question that Nightmare Alley is an expertly crafted cinematic experience, but it’s also dark to the point of being genuinely morbid and at times a bit too graphic. The director’s newfound clout allows him to push for a bloated runtime and leisurely pacing. While I’m a big fan of Collette, I couldn’t escape the feeling that much of her character’s screen time was superfluous, and there’s a good 15 minutes or so worth of judicious trimming to be done here and there throughout the film.

The production design by Tamara Deverell (Star Trek: Discovery) and the cinematography by Dan Laustsen (Crimson Peak) combine with a spellbinding score by Nathan Johnson (Knives Out) to make for a pulpy noir thriller that is a magnificently transportive experience, even if a part of you is always on the verge of screaming “transport me to hell out of here!”

As pulp noir, it’s quite effective, but there’s a lot to be said for leaving something to the imagination. Too often, Del Toro chooses to go for shock value at the expense of leaving a more lingering impression.

Nightmare Alley should please most of its target audience and has so much old-fashioned popcorn atmosphere that it’s crying out to be seen in the kind of one-screen, run-down old movie house we don’t have anymore, the dingier the better. But I still wouldn’t mind seeing some of the gentle sweetness that mixes with the macabre in Hellboy, The Shape of Water and Pan’s Labyrinth  featured in whatever the great director makes next. –Patrick Gibbs