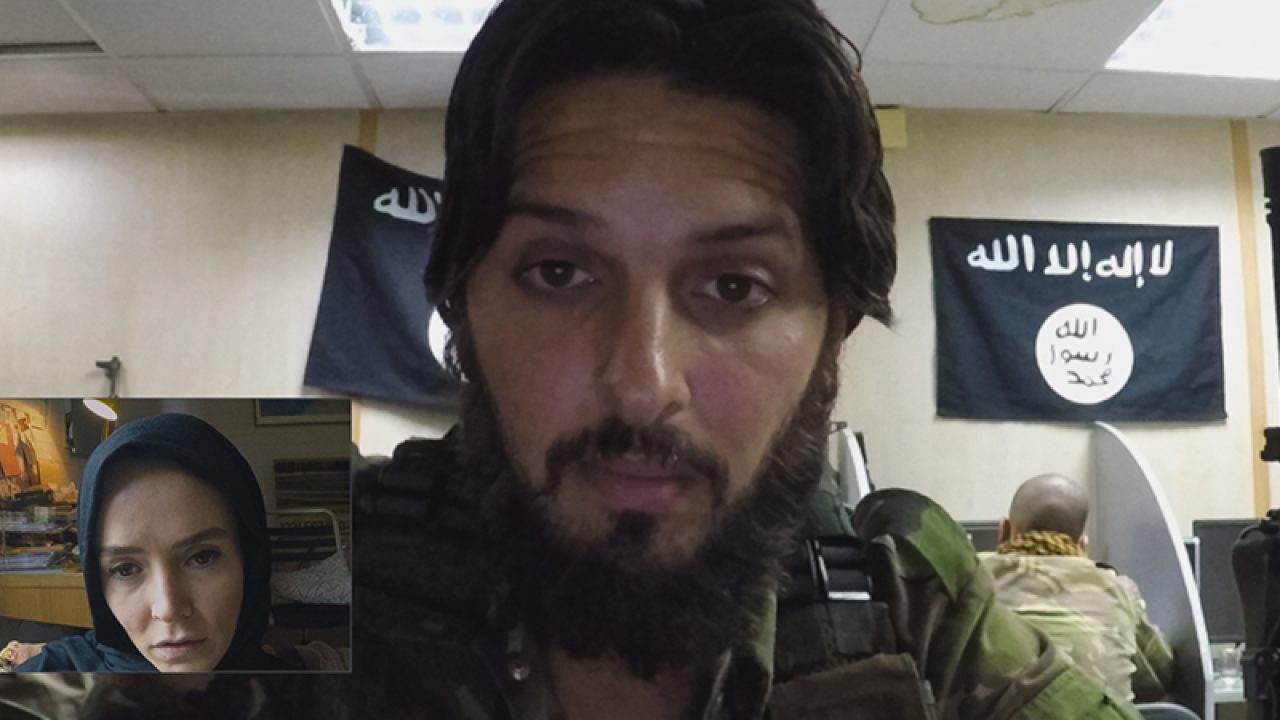 The “Screenlife” genre is where everything that the viewer sees happens on the computer, tablet or smartphone screen and was first used for a feature film in the 2014 social media horror flick Unfriended. It’s becoming more and more popular, replacing the found-footage movie as the new, cheap, exploitation-move go-to. It’s an audacious concept, certainly, and has been used for movies ranging from the 2018 thriller Searching to R#J, a new take on Romeo and Juliet that premiered at Sundance this year. The latest of these is Profile, which is directed by Unfriended producer Timur Bekmambetov, who never met a gimmick he didn’t want to overmilk.

She is quickly contacted by Abu Bilel al-Britani (Shazad Latif, Star Trek: Discovery), and the two begin talking through Skype. These chats quickly turn into a courtship as Bilel tries to seduce young “Melody” and talk her into journeying to Syria to become his wife and join the jihadist cause. Amy’s obsession with this story takes a heavy toll, not only on her personal life, but on her health and even her perception of reality, and she finds herself developing romantic feelings for Bilel.

Profile is based on journalist Anna Érelle’s biographic book In the Skin of a Jihadist, and Bekmambetov (Wanted, Abraham Lincoln: Vampire Hunter) has made a film that’s certainly intriguing and skillfully crafted, but also utterly unconvincing in terms of making the audience believe that its educated and savvy protagonist could so easily be taken in by this man. It’s not that the idea itself is outrageous; after all, it really happened, and as such, it’s something worth exploring. But it’s not explored, just glossed over, and the thought of what a serious filmmaker such as Paul Greengrass might have done with it is an intriguing one.

Bemabetrov is more like Russia’s answer to John Woo, but with substantially less subtlety, and Profile portrays a terrorist recruiter who—while certainly not without a certain charm—comes across so much like an online predator from the moment he first appears onscreen that it’s almost cartoonish. As a result, it comes across as rather insulting to the intelligence of this woman to the point of bordering on misogynistic, though that’s somewhat balanced by how oafish Bilel seems to be for buying her rather transparent charade. Bekmambetov has demonstrated throughout his career that he’s only interested in presenting broad caricatures and either doesn’t understand real people or simply doesn’t care; he just wants to play with his visual toys and wow audiences with his technique.

Kane and Latif are both giving it everything they’ve got, as is Amir Rahimzadeh (The Heights) as Lou, Amy’s tech advisor. He represents the film at its best, as his character is used to exploring knee-jerk Islamophobia and provides some counterbalance to Bilel’s fanatical nastiness. But the screenplay by Bekmambetov, Britt Poulton (Them That Follow) and Olga Kharina (Yolki 2) is far too simplistic and constantly strains credibility, both by making every element of the story happen so quickly that it becomes laughable at times, and by making all of the characters’ reactions to every little thing so extreme and one-dimensional that they all seem dangerously unhinged.

Profile isn’t a complete bust. It’s fairly engaging, moves fast, and I rank it easily among Bekmambetov’s better films as a director. Of course—since Wanted is my immediate response to the question “What is your absolute least-favorite movie of all time?”—that’s faint praise. But still, while it’s easy enough to get through, Profile is all style and no substance, and the hyperactive flashiness works against the human drama too much of the time. If all you want is something fast-moving that provides a few cheap and stupid thrills—a bargain basement 24, if you will—then you’ll find Profile to be just titillating enough to be worth your time, but those who are hoping to explore complex questions are likely to leave the theater feeling duped. –Patrick Gibbs