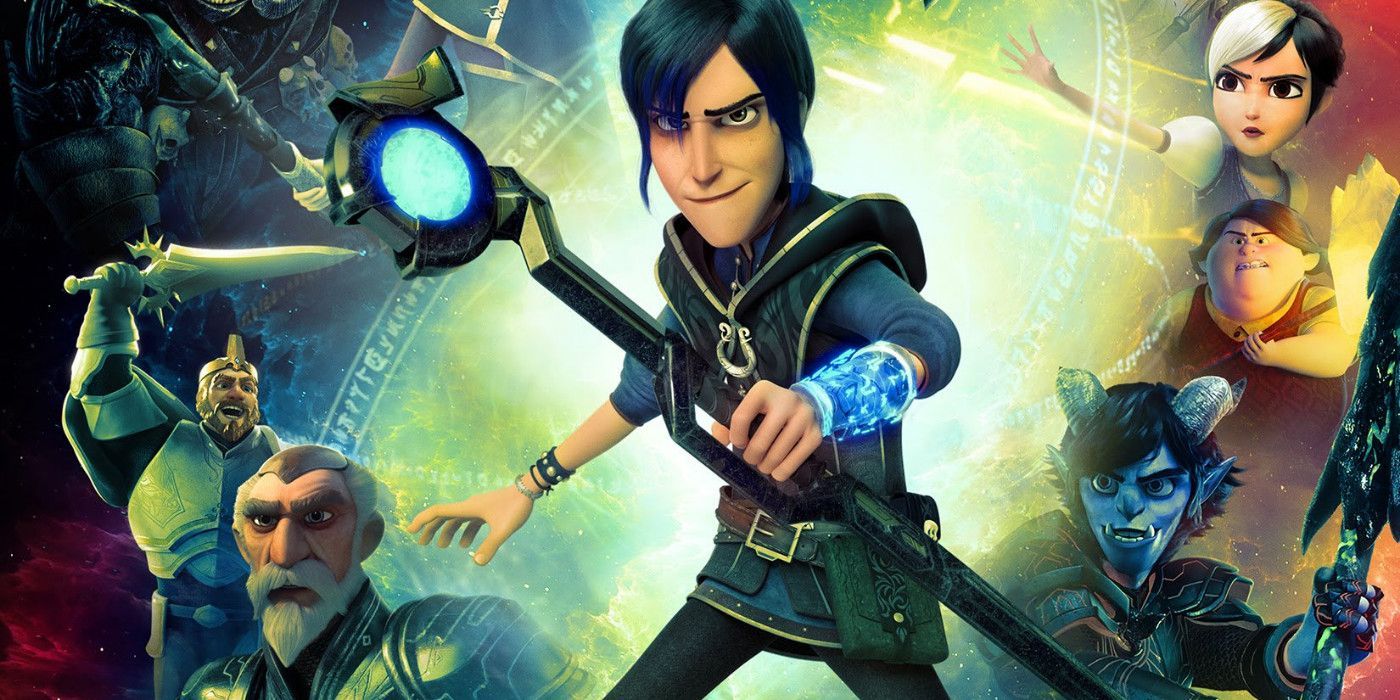 If you haven’t had the chance to watch Trollhunters, the rollickingly entertaining and visually sumptuous animated Netflix series from Oscar winner Guillermo del Toro, you are missing out on one of the very best reasons to even have the streaming service. If you’re looking for a binge-worthy experience, there’s literally no time like the present. And if you are interested in Wizards, the new 10-episode, limited-run series that just hit the internet this past weekend, you’re going to need to have seen Trollhunters and its spinoff, 3Below, as Wizards is the final series in the Tales of Arcadia trilogy.

Trollhunters focused on Jim Lake, Jr. (voiced by the late Anton Yelchin and then Emile Hirsch) and his adventures fighting against and alongside trolls living in Arcadia Oaks, California, and 3Below followed a brother and sister, Princess Aja (Tatiana Maslany) and Prince Krel (Diego Luna) of the planet Akiridion-5. Wizards is the story of a young wizard-in-training, Hisirdoux Casperan, aka Douxie (Colin O’Donoghue, Once Upon A Time), the apprentice of Merlin (David Bradley, best known as Filch, the decidedly non-magical groundskeeper in Harry Potter). along with the main characters from Trollhunters and Merlin’s “cat,” Archie (the great Alfred Molina), Douxie travels back in time to medieval Camelot, where King Arthur is preparing to do battle with the brutish Gumm-Gumms, a barbaric and cannibalistic tribe of evil troll lead by the warlord Gunmar (Clancy Brown). Now, the two sides prepare to face off in the to-be-famous Battle of Killahead Bridge.

While this all may sound a bit confusing to the uninitiated, if you’re a fan of the Tales of Arcadia mythology, this plot description should be mouthwatering. Wizards is far less episodic than the other two in the series, and it moves at an almost breakneck pace, jumping straight into the action and rarely letting up. But it also makes good use of the established characters and introduces a few new ones, and it’s about as much fun as I’ve had all summer. The outstanding voice cast also includes Kelsey Grammer, Ron Perlman, Lena Headey, John Rhys-Davies, Stephanie Beatriz, Brian Blessed and Mark Hammill.

Guillermo del Toro (The Shape of Water) is a visionary filmmaker, and his partnership with DreamWorks has lead to some of their most striking and creative animations. In terms of tone, the Tales of Arcadia trilogy is most comparable to the Hellboy films, albeit much more kid-friendly.

While this latest installment isn’t necessarily the best of the bunch, Wizards is a worthy addition to a unique television franchise. And while it features a lot less character development than the other two series, it never drags or feels like it’s struggling to decide where it’s going, which was an occasional problem with 3Below. Here, I sat down to watch one episode and found it nearly impossible to stop, and felt a bit sad to see it end. But not too sad, as DreamWorks, Del Toro and Netflix have announced the feature film Trollhunters: Rise of the Titans for 2021 release, and it promises to be yet another grand adventure from a master storyteller. If you haven’t been to Arcadia Oaks, I strongly urge you to check it out—it’s a magical place to be. –Patrick Gibbs