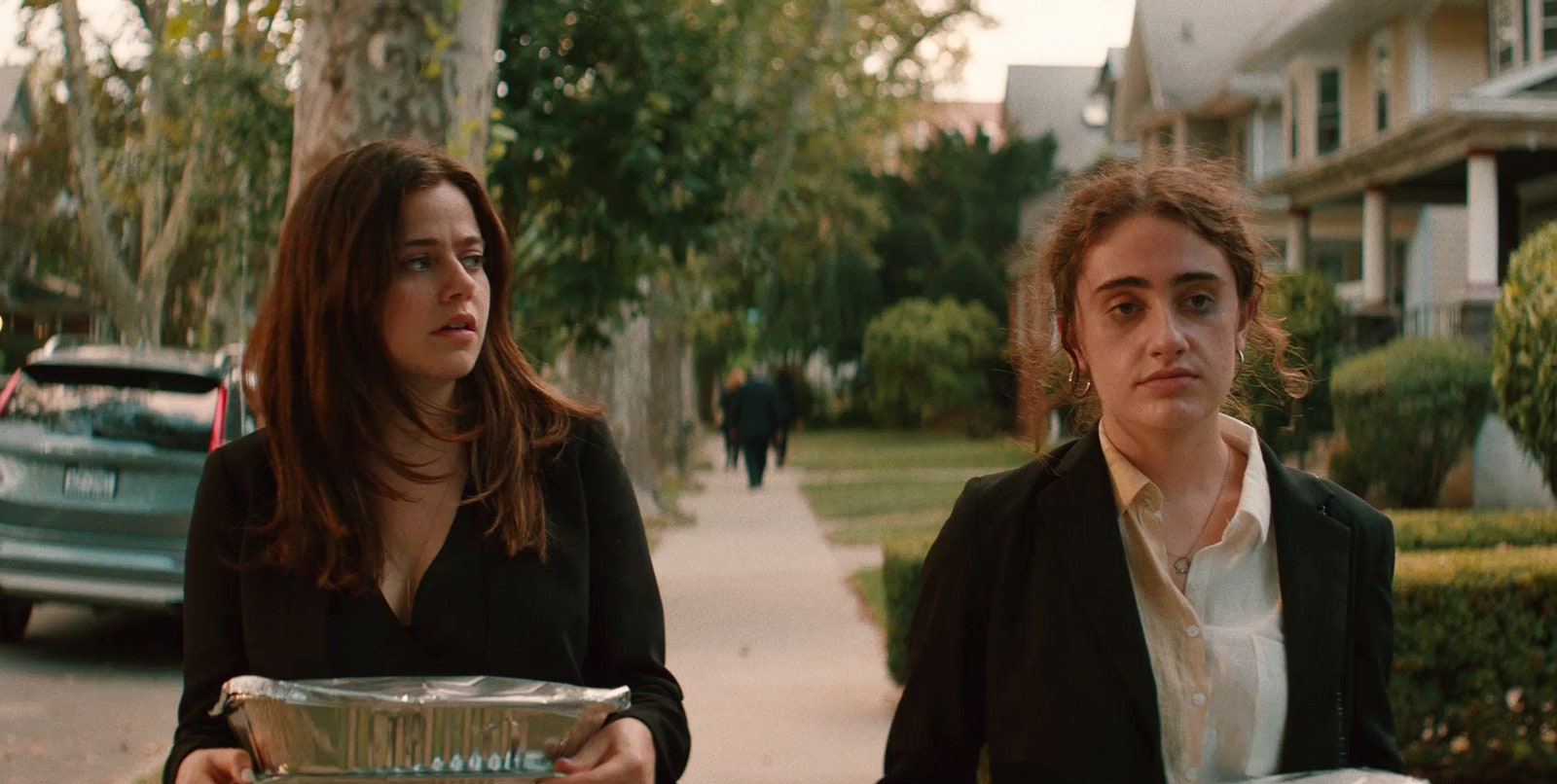 Dimbo Pictures
In Theaters and VOD: 04.02

Rachel Sennott’s character in Shiva Baby, Danielle, sits at a precipice: between adolescence and adulthood, between the ideals of competing generations, between the enthusiasm of her liberal arts studies and the nihilism of post-grad life. But these conflicts merely provide baggage that spreads across the film’s high farce. Adapted from Seligman’s 2018 short into this still-slim feature, Shiva Baby takes place in a single day—and mostly within one house—as near-graduate Danielle attends a Shiva in her hometown. In addition to her personal struggles, she now sits at the unholy intersection of an estranged friend/lover, her overbearing parents, her sugar daddy, his wife, their kid, and an endless parade of gossiping neighbors.

Shiva Baby serves as a vehicle for Sennott, and the actor dances through every scene with a palpable blend of dry wit and unease. Her disdain and confusion, her schemes and her embarrassments ooze out of every sullen-eyed glance and nervous tic. But the character—in both scripting and performance—refuses to fall prey to awkward-hot-girl stereotypes. Her clumsiness provides humor and relatability without treading into slapstick, and the scenes that find her in a position of relative power provide just as much thrill as her knowing, piercing gaze and smirk suggest. The whole narrative plays out from her perspective, in stolen glances, sly eavesdropping, secret text messages. The rest of the cast remains trapped in irony, almost willfully avoiding Dannielle’s mess that blows up (in secret) right under their noses.

And the anxiety heaped on Danielle by the funeral atmosphere drives Shiva Baby‘s bubbling drama as it teases overboiling. The claustrophobia of the cramped ranch house, the crippling blows of things said/unsaid by relatives and friends and more linger over Danielle’s already impossible situation. As the day wears on, Seligman turns the cloistered funeral into a feverish hallucination: The camera slides between shoulders and through hallways, never seeming to find air, and in the moments where the web of guilty parties comes face-to-face, threatening admission, the tension explodes into a delirium of expressionism.

Like Sennott’s last film, the 2020 Slamdance standout Tahara, the heart of Shiva Baby comes from the queer relationship that floats underneath the narrative. Maya (Molly Gordon) has been Danielle’s best friend for ages, with clues of their past romantic history popping up in vague references and warnings from their self-proclaimed “open-minded” parents. But as Danielle’s dilemma reaches its breaking point, Molly provides a salve for the wounds; in Molly, Danielle finds the acceptance that school, work, religion and family fail to offer. Even if their future—together or apart—remains uncertain, as the film’s bittersweet ending suggests, the knowledge of a mutual understanding carries them through their pitfalls and error, into the great unknown with a hand to hold. –Audrey Lockie