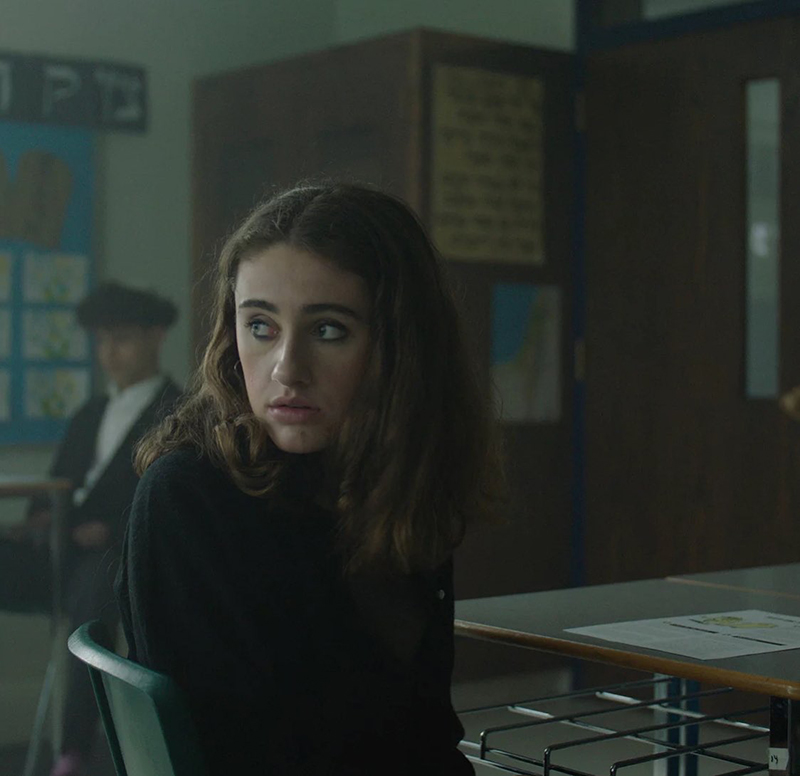 The film Tahara begins as a narrative of two best friends Carrie Lowstein (Madeline Grey DeFreece) and Hannah Rosen (Rachel Sennott) in the throes of adolescent self-discovery. Unlike other coming-of-age films, director Olivia Peace explores the intersection of toxic female friendships, sexual identity and rejection through the striking polarity of these two characters. It’s like a sinking ship, and the film marks each defining moment through the demise of this seemingly life-long friendship. In the span of one day during a classmate’s funeral, what Carrie wanted to believe was a bond is unveiled as Hannah’s manipulation that is used as a tool for her own gain.

Peace curated a small cast—the pair’s classmates and teacher—in their Synagogue as a singular location to make room for the intimacy and nuances between Hannah and Carrie. Though set during a funeral and grief class held after, the characters’ grief for the loss of Samantha Goldstein to suicide is purely performative and a side note to the “real” issues in their life—quite frankly, the only thing anyone was worried about was getting laid. The funeral was merely a location for these teenagers to carry out their sexual agendas and use the tragedy as a platform for their moral campaign.

Being the only grounded character, Carrie is frustrated with Hannah’s insistent pursuit of one out of the two guys in their grief class (the second guy being completely high on pot brownies the whole time) during what is supposed to be a time of reflection. In an all too familiar scene, Carrie and Hannah end up on a couch in the Synagogue’s bathroom where Hannah touts her sexual resume and Carrie shares her minor experiences apathetically. To validate her own skills, Hannah pressures Carrie into kissing her as “practice.” While Hannah’s intention is self-serving, this moment engulfs Carrie, the floodgates open and who was once her childhood friend is and has always been her torch through her entanglement of being a black, Jewish and queer teen.

The film begins and ends with one song over the same shot of a car driving to and from the Synagogue, the only time the film plays music. Speaking to the potential of toxicity in friendships that take place early in life, Tahara champions the idea of disconnecting from these bonds no matter the time invested—in Carrie’s case, her childhood—and encourages the safety of autonomy. While hilarious throughout, Tahara sheds light on the teetering weight of an imbalanced sense of self-identity both teenagers and adults face, and the role that those closest to you have in tipping the scale. While heavy, I look forward to the conversation Olivia Peace initiates in her next film. –Bianca Velasquez