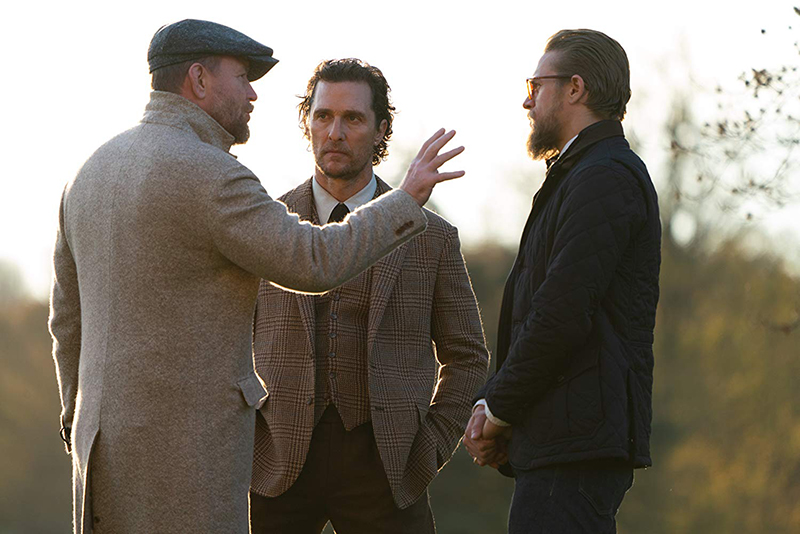 Last year, director Guy Ritchie scored his biggest box office success with his live action version Aladdin, a film which also managed to largely cement the growing feeling that the one-time gritty, indie favorite had lost not only his edge, but any sense of artistic inspiration. However, if there was anyone in Hollywood in even more dire need of reclaiming their sense of credibility, it was Oscar winner Matthew McConaughey. Recently, he managed to star in two colossal misfires: the almost universally panned flop Serenity, and The Beach Bum, which received more mixed reactions from critics (I personally despised it) but had the single lowest-grossing wide release opening of the star’s career. Both of these artists really needed to get their respective grooves back.

In Ritchie's new film The Gentlemen, McConaughey plays Mickey Pearson, an American Rhodes Scholar who dropped out of Oxford upon deciding he could turn his side venture of selling weed to his classmates into a bona fide criminal empire by staying in England and becoming a powerful underworld figure. Mickey has made his share of enemies along the way, but he has his consigliere, Raymond (Charlie Hunnam), to take care of any problems. One evening, a smarmy private investigator named Fletcher (Hugh Grant) shows up at Raymond’s home claiming to have enough dirt on them—which he has written up in screenplay format—to be worth £20 million. Fletcher proceeds to weave a tale full of intrigue, violence, betrayal and enough twists and turns to make you reach for some dramamine and a tall glass of water.

Ritchie is back in his element, and this brash, quirky and unashamedly crass comedy is just what his fans (myself included) have been yearning for—from Ritchie’s own wickedly clever script, to the catchy soundtrack and stylish editing, to the pitch-perfect string of performances from the ensemble. McConaughey doesn’t just bring his A-game to this one: he keeps his B-and C-games in his back pocket for good measure, channeling Al Pacino while staying completely true to his own persona. It’s easily his best star turn since Interstellar. Colin Farrell is side-splittingly funny as an earnest Irish boxing coach, and Grant is flawless in another Paddington 2–style surprise transformation. Hunnam arguably gives his most comfortable big screen performance to date, and I think I may have fallen in love with Michelle Dockery (Downton Abbey).

Still, this is a movie for fans. It’s full of blood, cursing, bawdy British humor and tongue-in-cheek testosterone, and it’s certainly not for all tastes. If you have a fondness for the kind of films that made Ritchie famous, you’re in for a hell of a ride. If you’re looking for another Aladdin, you are in the wrong theater –Patrick Gibbs