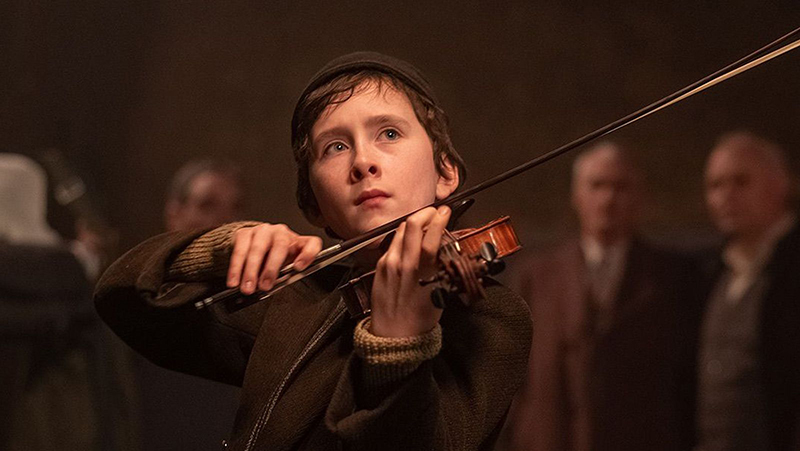 Film Review: The Song of Names

The line between effective drama and schmaltzy melodrama can be a fine one. Some stories walk it like a tightrope, at their best, they move steadily forward with confidence and grace, and at their worst they teeter from side to side, threatening to fall. The Song of Names never does fall, but it does a lot of teetering.

Set in Europe during the outbreak of World War II, the story follows Martin, a nine-year-old boy who learns that he must share his room with a boy his age, a Jewish refugee named Dovidl. The latter is a violin prodigy who Martin’s father takes in and sponsors so that he can pursue his studies and became a great concert violinist while Dovidl’s family returns to Warsaw. The boys become friends, and eventually, something akin to brothers.

After a few years, the boys are both grown up, and Dovidl is set to make his debut to a sold out audience. He not only fails to show up, but disappears without a trace. The film jumps forward to meet an older Martin (Tim Roth) at age 56. When Martin sees a young violinist choose to begin his performance with a very familiar and distinctive ritual of luck that he recognizes as Dovidl’s own, his belief that his “brother” is still alive becomes reignited.

Director François Girard (Thirty Two Short Films About Glenn Gould) is hardly a stranger to complex story structure, and he handles the jump from one timeline to another with a steady hand. Still, it’s impossible to escape the fact that the story of the boys is more engaging than the adults’ storyline. As good as Roth is in the role of the aging man haunted by the mystery of the brother he lost, he has to play off of an almost comically miscast Clive Owen as the older Dovidl. It’s not that Owen isn’t perfectly capable of being a captivating presence, but he was born to play James Bond (he famously passed on Casino Royale). At the moment of his big reveal, dressed all in black and wearing an obviously phony Hasidic beard, I thought I’d somehow switched to watching either an old Mel Brooks sketch or even one of those episodes of The Simpsons that delves into the past life of Krusty the Clown. The teenage Dovidl has nice a monologue about the difference between Judaism as a race and a faith (“ethnicity isn’t soluble in water. It’s a skin: You wear it until the day you die. But religion is a coat that can be easily removed.”). It’s a nice moment, and crucial to the story, but it only serves to remind us that Owen is only a couple of steps above Johnny Depp as Tonto in terms of puzzling casting choices. The coat simply doesn’t suit him.

The Song of Names is involving and at times even gripping, but it’s almost never convincing. Despite some genuinely great elements—especially the beautiful score by Howard Shore—it feels wholly manufactured and uninspired, and very much like the kind of overwrought soap that a certain infamous producer who is currently on trial in New York liked to brazenly push for Oscars. It’s not a bad film, but it desperately wants people to call it a great. As much as I’d like to oblige, the last thing this movie needs is another false note. –Patrick Gibbs