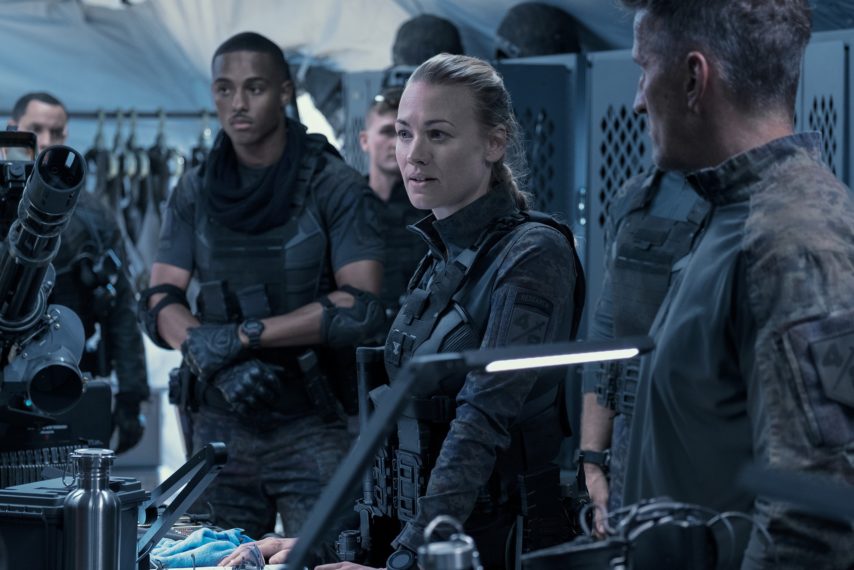 KEITH POWERS and YVONNE STRAHOVSKI stars in THE TOMORROW WAR

It seems that everyone out there has strong feelings about Chris Pratt, the star and executive producer of The Tomorrow War. One way or the other, and I’m getting sick of the subject. But I’ll admit that I have had my own issue with him as an actor, which is simply that between Parks & Recreation and Guardians of the Galaxy, he established that he was so good at playing the idiot manchild that it has been a struggle for me to take him seriously as anything else. But if nothing else, his new Amazon Prime sci-fi action thriller is a bit of a breakthrough on that level.

In The Tomorrow War, Pratt plays Dan Forester, an Iraq War veteran who aspires to be a prominent scientist but is stuck teaching high school until he catches a break. He must remain content living in the suburbs with his wife Emmy (Betty Gilpin, Glow) and his young daughter, Muri (Ryan Kiera Armstrong, Black Widow, American Horror Story). During a World Cup soccer match, the world is stunned when a group of time travelers arrive from the year 2051 to deliver an urgent message: Thirty years in the future, mankind is losing a global war against a deadly alien species.

The only hope for survival is for conscripted soldiers and civilians from the present to be transported to the future and join the fight. Determined to save the future for his daughter, Dan teams up with a brilliant scientist (Yvonne Strahovski, Chuck, The Handmaid’s Tale) and his estranged father (J.K. Simmons, Spider-Man, Whiplash) in a desperate quest to rewrite the fate of the planet.

Director Chris McKay (The Lego Batman Movie) does an overall capable job with his live-action feature debut. The pacing in the first 40 minutes felt a little tentative to me, and the script by Zach Dean (Deadfall) is stronger on ideas than it is with characters and dialogue, but The Tomorrow War really takes off when Forester and his fellow recruits get into the thick of things in the future. The battle scenes play like something like Aliens as a full-scale war, and they get just intense enough to be good fun.

The characters also get substantially more interesting at this point, as the plot takes an interesting turn. Pratt is surprisingly convincing as a clean-cut, frustrated wannabe scientist, playing a character that feels more like a blue-collar Jack Ryan than the slacker versions of Han Solo or Indiana Jones he’s known for playing in Guardians and the Jurassic World movies. For once, he doesn’t leave me with the impression that he’s playing one of the “let’s pretend” alter-egos of Andy Dwyer, his Parks & Recreation character.

Pratt actually plays credibly as a functioning, responsible adult. It may not seem like an accomplishment, but for Pratt, it’s a departure both as an actor and from his offscreen persona. While it may not be a favorite among his hardcore fans, if he’s going to have any career longevity, he needs these chances to prove he can play wider variety of roles.

Strahovski has the best character in the film and plays her role well. While Simmons doesn’t get enough screen time, he makes the most of every second he’s on there. Sam Richardson (Veep) is likeable—if not necessarily funny—as Charlie, the plucky comic relief character.

The Tomorrow War gets some points for being an original story, which is to say that it’s not taken from existing intellectual property. Not that it doesn’t imitate plenty of other sci-fi movies—particularly, Independence Day, the Terminator series and Edge of Tomorrow—but it has just enough ideas of its own to feel worthwhile enough, if not exactly like anything that breaks new ground in blockbuster filmmaking. Cinematographer Larry Fong (300, Super 8) and production designer Peter Wenham (The Bourne Ultimatum, Captain America: The Winter Soldier) give the film a slick look, and the CGI alien creatures are just lifelike enough to make for a good toy design without being too cute to blow apart in a hail of bullets.

The Tomorrow War runs a bit too long at two hours and 20 minutes and is far from a must-see. But it’s probably the best piece of blockbuster-style filmmaking that Amazon has delivered so far. Given the fact that they have chosen to move away from an emphasis on winning awards and instead want to make big hits, it’s not a bad start.

The Tomorrow War should be fairly popular with those who miss ’80s James Cameron, or at least ’90s Roland Emmerich. While under normal circumstances, it would be more of a March kind of movie than a July one, these circumstances are not normal at all. Thanks in no small part to Pratt’s and Strahovski’s entertaining performances, The Tomorrow War’s brand of pulpy fun worked well enough for me to call it a success, even if it’s not anything that is going to create a devoted fanbase. –Patrick Gibbs